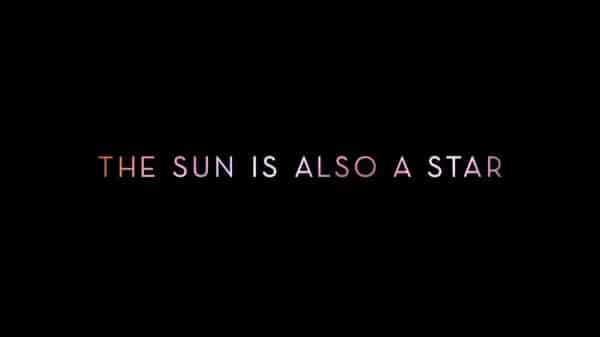 Compared to the book, the film version of The Sun Is Also A Star loses what made Natasha such a great character and, plainly, is a disappointing adaptation.

The Sun Is Also A Star Plot Summary

With ICE busting her dad, Samuel, in the restaurant he worked in, now Natasha and the rest of her family are being deported to Jamaica. However, not giving up just yet, on the day before she is to be deported, Natasha heads to USCIS in an attempt to stop the deportation. This leads to an inkling of hope as she is directed to a Martinez esquire., who may be able to give Natasha’s family more time.

As she waits to meet Mr. Jeremy Martinez, she finds herself being saved and then spending time with Daniel. He’s a first-generation Korean American who, since choosing a stethoscope as a baby, his parents considered him destined to become a doctor. A fate he has no interest in for he’d rather be a poet. Which is what attracts Natasha in the movie. Him being lovey-dovey, always filled with optimism, it wins her over as she deals with one of the most traumatic experiences of her life.

Yet, there is always a part of her that doesn’t want to get comfortable. That doesn’t want to give in and admit to Daniel she is falling in love with him. For what may happen when this poet realizes, despite his talk of fate, X-Factor and all that, there are more forces out there keeping them apart than together? Much less, how much harder will it be for her to leave if she feels her heart will be left in New York?

“Maybe being open to fate, that’s a choice.”
— Jeremy

Despite how neutered Natasha is, Daniel remains mostly unchanged, and Charles Melton is allowed to be the heartthrob you expect him to be. One who may not have the length of hair that you may think Daniel should have, but outside of a few minor things like that, you can imagine anyone, especially Natasha, swooning over him. Even considering his version of “Crimson & Clover” may seem hot in the trailer but comes off weirdly intense, and awkward, in the movie.

The Changes To Natasha

Who is this person named Natasha? It surely isn’t the girl in the book who bases everything on logic, doesn’t make wooing her easy, and often led Daniel to believe he should have given up multiple times. Not that Natasha. For the Natasha we meet in the film, yeah she may like astrology, but her love for science and logic is turned down to the point it seems like she isn’t supposed to be too nerdy or too different. That she isn’t supposed to be seen as difficult and should be happy some guy is taking an interest in her, even if it is terrible timing. Add in her being into Nirvana, among other rock artists, deleted, and it seems all that made Natasha stand out was stripped. Leaving her this genetic shell that makes Natasha’s one notable difference being her skin color and hair texture.

If You Read The Book, This Feels Overly Simplified & Watered Down

I’ll make a whole separate post about differences, but outside of the Natasha ones noted above, there is also how Daniel discovers Natasha is undocumented, Charlie and Daniel’s relationship, as well as Natasha’s relationship with her father. All of which were part of what drove the book to not only seem like growth for Nicola Yoon as an actor but also presented us with complex characters who are in complicated situations. Like, the absence of Samuel being a failed actor, the DUI, and all that, it clips Natasha at the knees since he is made into a generic immigrant who just wanted better for his family. All of his selfishness is stripped.

Then, with the absence of Charlie’s self-hatred being stronger, and his failure, Daniel is forced to rely on being a first generation immigrant deciding his fate. And with Natasha not challenging him but seeming like a smitten puppy throughout the film, she never calls him out on not taking his future seriously, his certain level of privilege, or none of that. Their romance remains so simple and sweet, it just comes off bland. Even during the karaoke scene which was FIRE in the book.

There Remains A Sense Of Culture With Daniel’s Family

As noted, there remains some sense that Daniel wasn’t stripped to being a young actor with abs who could make young women, and some gay men, swoon. There is the aforementioned pressure as a first generation immigrant to pay back your parents sacrifice. Also, while not played upon as heavily in the book, there is some noting of Daniel being in an interracial relationship and how that could work out. Lastly, throughout the film, there is Korean dialog and Charlie’s altercation with Daniel over identity. Again, nowhere near as impactful as in the book, but maybe if you didn’t read the book, you could take the nod and enjoy it.

Viewing This Film Without Reading The Book

A lot of the negative aspects of this film for me comes from reading the source material. But, for those who didn’t, I believe you could see this film as cute. After all, you have this as a young girl trying to avoid the most traumatic day of her life apprehensively falling in love with a boy she just met. Add in how much he talks about fate, and the stars aligning, you may get into what this movie is selling. Add in Shahidi and Melton being young, cute, and adorable together, and it’ll make each time they hold hands or kiss seem like the sweetest thing. Yes, a bit tame, but there could be the argument that this isn’t a hot and bothered kind of movie. It’s just a simple one day romance which pushes you to hope, crossing fingers and toes, that it’ll last.

Which if you read the book may seem like they oversimplified the plot. However, if you don’t know a thing about the book, I don’t think you’ll hate this version of The Sun Is Also A Star. May not be the best YA romance you ever saw, but you may not get as up in arms as I am.

The Sun Is Also A Star Overall: Mixed (Divisive)

You ever watch something you just knew you were going to like? Especially since you loved the source material, and with the casting being good, you were prepped to laugh, cry, and get in your feelings? That’s how I felt. Yet, after watching the film, I’m confused as to how the same person who wrote Girl’s Trip, and Little made this. Particularly considering how neutered it feels in terms of passion, depth, and complexity. Hence the mixed label. While The Sun Is Also A Star, on paper, seems like it should be a movie that’ll cause butterflies, lead to emotional performances, and really be a highlight for everyone’s careers, it isn’t at all. It’s a movie which makes you question if the writer and director read the source material and, if they did, how did they come to the decisions which led to what was released in theaters?

If You Read The Book, This Feels Overly Simplified & Watered Down - 65%

There Remains A Sense Of Culture With Daniel’s Family - 70%

Viewing This Film Without Reading The Book - 71%

While The Sun Is Also A Star, on paper, seems like it should be a movie that’ll cause butterflies, lead to emotional performances, and really be a highlight for everyone’s careers, it isn’t at all. It’s a movie which makes you question if the writer and director read the source material and, if they did, how did they come to the decisions which led to what was released in theaters?