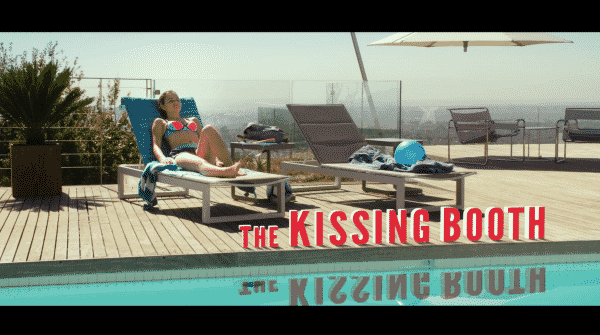 On one hand, The Kissing Booth can be seen as a conversation on a young woman’s autonomy. On the other, it is a simple, sweet, and kind of cheesy romantic comedy.

It’s junior year and Elle and Lee are still best friends, basically since birth. Something that can be contributed to a list of rules they came up with when they were 6 that, almost 11+ years later, they still abide by. However, as Elle pushes herself closer and closer to breaking one of Lee’s major rules, being not falling for his playboy brother Noah, so comes the question of what would happen to their friendship if the rule gets broken?

It’s so weird to kind of have watched Joey King go from Selena Gomez’s little sister in Ramona & Beezus to playing a 17-year-old who is sexualized, making out with boys, and having simulated sex. Yet, despite the awkwardness of that, you have to admit her relationship with Noah is kind of cute. Not in a, I’m putting them on a pedestal as the goals for my future relationship, kind of cute, but cute enough for you to get through the movie.

Though I don’t have it in me to dig deep into themes which may or may not have been considered in the making of the film, you do have to take note Elle’s autonomy is a strong part of this. Be it Noah not scaring off guys because he has made his claim, Lee guilting her into not being with his brother, or Elle having the right to be in a bra or swimsuit without being harassed. It may not be heavy-handed, or worth a full-blown article, but you have to appreciate the commentary provided on society seeing a girl’s innocence and time as something to be monitored and controlled in a way.

There are certain elements of this movie which go beyond the corniness of the romance between Elle and Noah. Of which include Elle slightly dealing with her mom’s death and Lee and Noah’s issues. Something which can be contributed to Lee’s jealousy of Noah, but considering it is so deep he’d think Noah would hurt Elle just to mess with him that took things to a new level. However, and maybe this is my memory failing me, I didn’t find myself understanding how Lee could think that.

Granted, for a good portion of Noah’s scenes, he is probably fighting someone. He even admits going to counseling for his anger issues. However, fighting dudes, seemingly mostly to defend Lee and Elle, to thinking he would hit Elle are two different things. So it makes you wonder not just why the way Noah is wired makes him so fight-prone but what’s with Lee and his need to have Elle to himself?

I mean, it is said he wanted one thing to himself that wasn’t Noah’s but, it isn’t even like he saw Elle as a potential girlfriend. So, what gives?

The movie is certainly likable and by no means terrible. Yet, at the same time, there isn’t anything strong enough in terms of writing or performances to say you must see this movie. It’s just something to watch if you have an abundance of spare time and nothing better to do. Hence the mixed label.