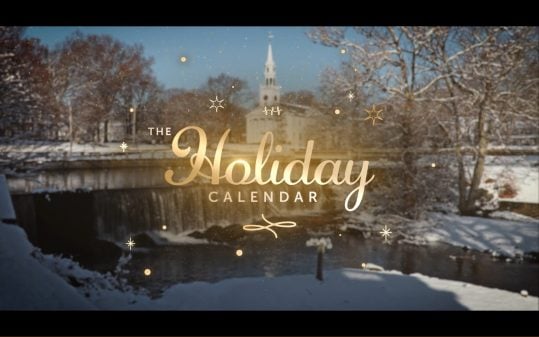 The Holiday Calendar may not win over people who don’t like holiday/Christmas movies, but if you do? This is a good film to start the season.

Since they were kids Abby and Josh seemingly have known each other and when it comes to Abby’s family, they’ve been waiting for one to have the guts to ask out the other. After all, Josh helped Abby discover his love of photography, the family loves him, and he is a good guy. Much less, it isn’t like Abby has really dated anyone else noteworthy who she has chemistry with.

So, to perhaps push things along, Abby’s grandpa gifts her this advent calendar that was her grandmother’s. Leading to, each day, Abby feeling like she is being guided towards someone. Not who the family wants, Josh, but a local doctor named Ty. Leaving you to question if Ty might be the one and Josh just the best friend who missed his chance? Will this be a Christmas movie with a bittersweet ending?

That’s the problem of having a great love. The “Pretty Good” ones don’t stand a chance.
— Gramps

People can show you whatever they want. But it’s how they make you feel… that counts. And how you make them feel too.

It’s A Little Less Fluffy Than The Average Christmas Movie

Until last year, I really didn’t seek out new Christmas Movies. I usually kept it to a Diva’s Christmas Carol

and The Preacher’s Wife

. Yet, between A Christmas Prince or Christmas Inheritance, I got caught up. But, one thing I began to notice is a lot of them, while they have a dead parent or some slightly sad thing involved, they all could easily morph into one. Even when one has an extravagant element like meeting a prince and falling in love.

Now, with The Holiday Calendar, because I guess it can’t be called The Christmas Calendar, what makes this less fluffy is because Abby hates her job and is at that point of giving up. Not in a suicidal, drastic way, more so just giving into her family and working at her dad’s law firm. All the while Josh is out there living his life and the dreams Abby likely had for herself. Yet, when he is around, she avoids letting that green monster show whenever possible. Instead, she is glad one of them go to do something they loved and she lives vicariously, sort of.

Which I appreciated for on top of not making Abby the jolliest girl around, we have that she is cool with her family, especially her grandpa, yet still feels like an outsider. Making it so this film seems more rooted in reality, even if this calendar is trying to reveal Abby’s future and the paths said future can take. If she just opens herself up to the possibilities.

Josh and Abby Are Couple Goals

One thing which not every romance film cultivates is a friendship before a relationship. With this film, you really understand that, whether they get together or not, Josh and Abby likely are stuck with one another for the rest of their lives. Josh is part of the family, his absence is noticed, and they’d love for a ring to be involved to make him being a Sutton official. And, after a while, you are feeling the same way and wondering when are one of these two going to say something since they clearly got feelings for each other. The only issue may be that they don’t want to jeopardize the friendship or are cowards.

If You’re Not Into Christmas Movies, This Will Not Be An Exception

I can dig the romance of the film, and can deal with the idea this wind-up calendar can partially predict Abby’s fate. However, if films like these usually don’t tickle you, then I would not say you should watch this. The acting and writing is good enough but isn’t genre-defying. Even with a handful of poignant moments that seem a bit too deep for a Christmas movie with no real dramatic elements.

If you’re looking to get into the Christmas spirit, The Holiday Calendar makes for a good start. It has holiday magic, a cute romance story, that has a few twists, and yet seems a bit more grounded than most holiday movies. Giving you enough to keep with tradition but the kind of changes which makes it so you don’t feel you’ve seen a “new” movie like this for the last couple of years. Hence the positive label.