Wherever I Look
Recaps, Reviews, and So Much More
Home Movies Bohemian Rhapsody – Recap/ Review (with Spoilers)
Movies

Bohemian Rhapsody is both a tear and chills-inducing film, all thanks to Rami Malek.

Table of Contents show
1 Summary
2 Highlights
2.1 Rami Malek Brings A New Dimension To Freddie Mercury
3 On The Fence
3.1 You Learn A Bit About Freddie But His Bandmates? Barely More Than Their Name
4 Overall: Positive (Worth Seeing) | Purchase Or Rent On (Fandango) – Get The Soundtrack on Amazon
5 Follow Wherever I Look on Twitter and Like us on Facebook.

From the time when Freddie was actually Farrokh, working at the airport, to the Live Aid concert, the movie takes on the highs and low of Freddie’s rise and fall. From meeting Mary, the love of his life, to showing his complicated relationship with men which is mostly rooted in lust, convenience, and loneliness, until Jim Hutton. All the while working with bandmates Brian, Roger, and John to create some of the most iconic records recorded in the English language. Though, naturally, not without much strife as egos, not just Freddie’s, constantly clash over royalties, what gets on the album, and people feeling stifled by one, or all, who bring the best out of them. 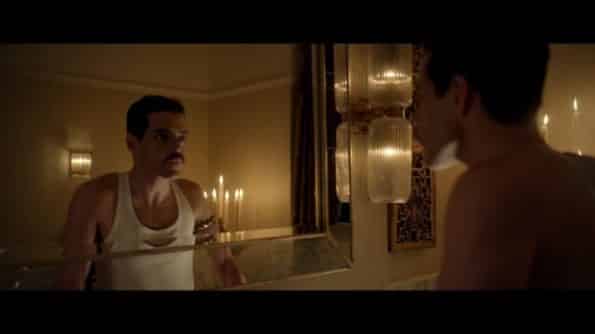 While I have seen a handful of documentaries, and of course many a rebuttal about what the film gets wrong or uses artistic license for, I still felt underprepared. The reason I say that is while Malek has been talked about incessantly, the only thing and one praised, I don’t think anyone who got to see this early gave him enough praise. As Mercury, he does more than give us theatrics and a level of flamboyancy which seems as liberating as it is a hole he dug for himself. What he also gives is the man behind the curtain.

Something which, of course, every biopic does, but with knowledge of Sacha Baron Cohen complaints, among others, you’d think this film was watered down just for the sake of tickets. Which wouldn’t be a complete lie. I will say, as flamboyant as Malek plays Mercury, nothing is explicit. Rather than focus on the many things which could have led to him contracting HIV, then AIDS, it is about the loneliness of Mercury.

There is Farrokh who never saw eye to eye with his dad and felt distant from his family. Loved them, knew he was loved at the end of the day, but not in the way he needed or wanted. Hence such a strong attraction to Mary for she gave him the normalcy he wanted. That girlfriend, potential wife, figure who gave him something to return home to. Someone who’d call him out rather than worry about him cutting them off or anything like that.

But, as we all know, Mercury was bi-sexual and had an extended ho phase. Which, addressing his homosexuality, the thing with this film is it isn’t really that graphic in the depiction of sex or drugs. So you pretty much have to read between the lines. You see a man go into the bathroom and Mercury follows, that’s him cruising. There is a boy with only underwear on, while Mercury is in a robe, looking out into the world, they had sex. You see white powder on the table, obviously, someone is doing cocaine. Which isn’t to imply the film downplays just the drugs and homosexuality. Even with Mary, the actress is wrapped up enough that she could have a strapless dress on for what we know. 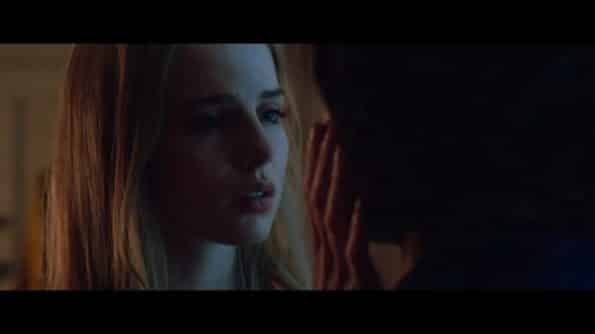 And I bring this all up to say, whether we’re talking about the performer or man who found more consistency in cats and a woman he could never be with, Malek brings a certain reason to Mercury’s madness. Thus giving us both the iconic figure and the man who seemingly felt crushed sometimes by the people who that figure attracted. Especially since he was never sure who was there for him or the fame.

You Learn A Bit About Freddie But His Bandmates? Barely More Than Their Name

Let’s be real, while they had to be in the movie, this movie would be a much harder sell if it focused on Mercury’s bandmates. For while legendary in their own right, their legend doesn’t compare to Mercury’s. Yet, I must admit, them being regulated to a name, an instrument, with little nuggets about this one or that one getting married, perhaps having a kid, seemed comical and also a bit cruel. For this seems like it technically is the Queen biopic, not the Freddy Mercury biopic. So why are these guys damn near blank canvases?

Overall: Positive (Worth Seeing) | Purchase Or Rent On (Fandango) – Get The Soundtrack on Amazon

While Bohemian Rhapsody may not be completely factual nor a prodding movie about Queen’s lead singer, or bandmates, why would an unconventional band have a conventional biopic? For what you’ll ultimately get with Bohemian Rhapsody is a better understanding of Freddie and a reminder of all the classic hits he wrote or were part of. Pushing you to do more research on your own, find music not featured in the film, and really enhance what it means for you to be a Queen fan.

Hence the positive label. Putting an optimistic spin on this, what Bohemian Rhapsody does is what many a biopic tries. It injects new life into a vintage name and pushes that name back into conversation for one more resurgence. For while the name “Queen” and “Freddie Mercury” will never fade away, that doesn’t mean, like how Mercury lived his life, it can’t be spruced up, break away from the trends and remind all who is truly rock and roll royalty.