While the mystery may not hit as hard as it should, Katherine Waterston makes up for it with a commanding performance.

It has been a year since the assumed suicide of Stefan Delvoe and his wife of two years, Katherine, previous to his death, hasn’t fully recovered. In fact, she has avoided dealing with the situation as much as possible. However, with Stefan’s mother, Anneke, trying to sell her son’s former home, seeking money to handle his affairs, Katherine finds herself back. Yet, with now asking questions, seeking answers to why her husband, a budding star, would kill himself, she discovers a series of events that ended up killing Stefan.

“It’s just an excuse so you can sleep with whoever you want. Not because you’re lonely, because you want to be alone.”
— Katherine

“We can learn a lot from desperate people.”

“Funny, peel back a layer and no one’s who they seem to be.” There are many reasons to be kind of iffy about State Like Sleep, but Katherine Waterston is not one and how Danluck writes her specific character. The way Waterston handles Katherine’s search pushes the idea this is a who dun it kind of mystery. It makes you wonder, as she looks into Stefan’s death, was it a suicide or a cover-up?

Also, speaking of a cover-up, there are times you’re left wondering, because she is an American photographer and he is this big star, maybe she killed him. They were separated, and on the verge of divorcing, he was seeing with some blonde woman, so who is to say she wanted his money, wasn’t going to let him cheat and keep it all, so she killed him? It’s just the way the movie played things out for us, either we were given an unreliable lead, or she hired someone?

That is what Waterston brings to this which elevates the film and pushes you to wonder what happened with the rest of the movie?

Sex, Drugs, Mommy Issues, and a Lackluster Tone of Mystery

A part of me feels this was supposed to have a slight noir vibe. At least due to drugs being a big part of it, Michael Shannon’s sexcapade stuff, and the way the mystery seemingly was supposed to be seen. However, taking away what Waterston tries to bring this film, you see quite a few stumbles. 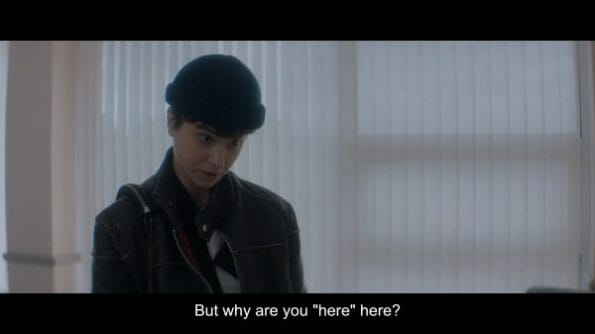 Katherine (Katherine Waterston): But why are you “here” here?

First and foremost there is the issue of Elaine’s place in this movie. Her coming about, talking about how Katherine hasn’t been the same since Stefan died, all that, it wasn’t necessary. The way Danluck wrote Katherine and how Waterston performs her makes it clear Katherine is either feigning feelings of guilt or mourning. Elaine adding onto that seemingly is just to make things obvious.

Secondly, as much as there is a push to lead you to question Stefan’s mother Anneke, his childhood best friend Emile, the mystery blonde, a photographer, and even Katherine, it isn’t pushed to the point it should. Especially when Katherine thinks she has something and the cops talk about Stefan being connected with the country’s identity. Never mind the police knowing about Anneke doing some shady stuff. With hearing that, it makes you think there is going to be an excellent pay off in the end, but the ending falls flat. 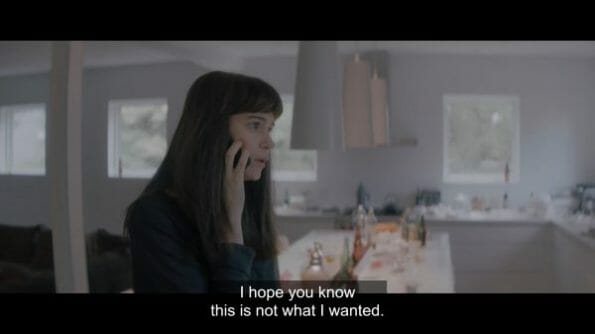 Katherine (Katherine Waterston): I hope you know this is not what I wanted.

A part of me almost wants to say to skip this since there isn’t a rental option on Amazon, but rather you have to buy this for around $16, including taxes. I should note though, even renting this for $7, before taxes, on iTunes seems a bit much. But that’s only because the ending isn’t satisfying. If the film nailed the ending and beefed up the mystery a bit, I wouldn’t hem and haw over the price.

But, the floundering mystery is the main reason this is being rated as mixed. While Waterston does a good job of crafting intrigue with Danluck script, there is no payoff. You may find yourself coming up with all these ideas, thinking somebody is lying and you find out that… well, for those interested on my take of the ending, head over to page 2.