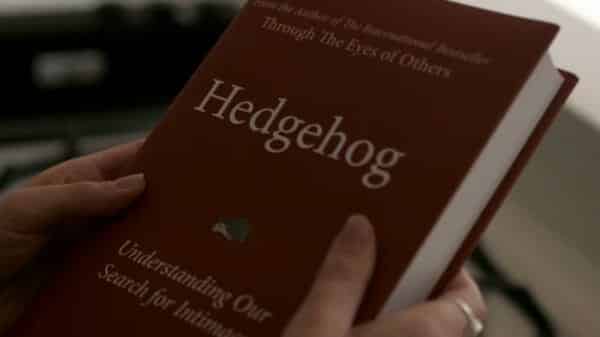 Hedgehog, in 2 hours, addresses its leads toxic behavior and takes note of the difficulty in being vulnerable and not relying on what is easy or convenient.

When Ali was 10, her father, a popular local comic, died. This left a gaping hole in her life, and with her relationship with her mother combative, it left her feeling very alone. Fast forward at least 10 or more years, and she finds herself trying to discover herself by treading her father’s footprints. However, in doing so, it seems she is only getting to understand, more and more, why he decided to numb the pain of life with drugs than face it.

I see now for the first time that solely looking through the eyes of others has left me blind to my own heart. I have shut myself up living inside the minds of those I’ve spent so long trying to understand that I’ve begun to feel disconnected from my own life.
— Ali quoting Joan’s book

So many people spend so much time trying to recreate the past, so that they can rewrite their histories and come out the victor, the one that doesn’t get hurt.
— Joan

Reading the synopsis, you may think Ann Dowd would end up playing Madeline Brewer’s mother. That their contentious relationship would be the focus and their eventual reconciliation the climax – the tear-jerker. However, that is not the role Dowd plays. Instead, she is an author, a doctor, named Joan who helps Ali process some of the things which have made her life stagnant. As shown in the clip above, Ali is dealing with being disconnected and trying to find something or someone to engage her. Yet, with a string of boyfriends who used her until they found something better, and her father’s death haunting her, she became too afraid.

Leading to the power of Dowd’s performance for while not acting as a ghost of Christmas future, since it isn’t Christmas in the movie, through Joan’s research and own life, she tells Ali what no one else does. She finds a way to break through to her like Ali’s mother can’t because their conflict puts a wall between them. Also, she can talk to Ali without there being this need of validation clouding and complicating things; If not her wanting to be and do what the guy needs to keep her around.

Giving us many touching moments, especially towards the latter half of the movie, which will have you reflecting about your own life. Maybe the relationships you have and how you have decided to live your life. Either to the fullest, what was most convenient, or what starves off loneliness enough to keep you alive.

Watching a 2-hour drama is hard enough in theaters, but is especially difficult doing so at home. What doesn’t help this movie is, despite Ali being in pursuit of a comedy career, there aren’t any jokes put into the film to lighten things up. What we get is the full weight of Ali’s journey from being someone who observes others, maybe at most is engaged when she is bickering or fighting, to realizing the path she chose is holding her back. As in real life, that isn’t something which can be done in a snap and you feel like you are spending eight weeks as Ali opens up to us, and Joan, and allows herself to be vulnerable.

I will say though, the inclusion of Sean, a love interest, does help make this movie’s time length a little easier to bear. For while it is an uneasy romance for Ali, it’s more enjoyable to watch than her spiraling out and repeating bad habits. I can’t claim their relationship will give you butterflies, make you go “Aw” or anything like that, but there is a beauty to it that does help viewing experience immensely.

– Currently Can View Free if You Have Amazon Prime)

While I must admit I couldn’t sit through this in one sitting, I find myself wondering if it is because the movie hits too close to home or because it is too long? For while I don’t believe Ali’s age is said explicitly, the way Copeland writes her makes her universal in a way that can feel like a gut punch. Especially if you feel like your life isn’t going as you may have once planned, the past has caused you to look for some form of methadone over truly dealing with the pain of life, and you feel almost helpless to get out of the rut.

Hence the positive label. Though this movie requires some patience to finish, it’s because it doesn’t want to rush what is the human experience. It wants you to understand life doesn’t change in an instant and takes time. So how else can that be done than by taking note of the conversations that change a life? Showing the cycle of bad habits you need to break and how difficult it is to figure out who means well and is just a replacement for what you think you got past?