For those who are fans of the Viziepop demon motif, something a bit more child-friendly is released – if your children are into monsters.

Monsters who get their high on Halloween eventually find themselves losing their abilities to scare as Christmas swoops in. This bums out the pumpkin demon, but the spirit of Christmas does their best to make them happy. Leading to a beautiful relationship.

When it comes to most of what Viziepop releases, there is a lot of cursing, innuendo, and scenes not made for children. However, “Holidaze” reminds you that Viziepop is diverse. They can do animation like “Hazbin Hotel” and “Helluva Boss” but also make the kind of productions that may stay in the realm of demons, monsters, and scary things, but be kid-appropriate. Sort of like how “The Adams Family,” at its best, isn’t necessarily for children but for kids who don’t need a night light.

And with “Holidaze,” as you watch this Halloween monster mourn his season ending, you feel bad for them. For as much as you recognize they aren’t making people scream for their livelihood depends on it, like “Monsters Inc.,” it is Halloween. Half the fun is being scared, and for 11 months out of the year, what is the monster to do?

So with the Christmas spirit coming in and willing to share or combine their holiday with the pumpkin, it gives you butterflies. 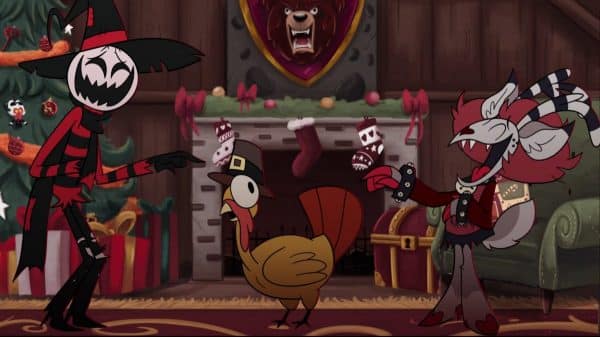 Yes. It was quite nice to see something which was still very much on-brand but a bit more child-friendly from Viziepop – with their sense of comedy still in there.

Definitely. Viziepop, even with its shorts, presents you with the kind of productions you want to share and see the reactions of. For while there are others with this style, Viziepop, as a brand, has shown it can do more than provide a visual hook but give you a reason to stick around for more.

Considering the time and effort it takes to make something animated, doing something simple has to be difficult. After all, you have this team in place, there is probably this desire to go big, do more, and really go all out. So to constrain that, either due to time or budget, and also make something for kids, and the holidays? I’d say it is a risk when the brand is becoming well known for animation geared towards adults.

However, as shown in “Holidaze,” Viziepop isn’t trying to be a one-trick pony or known for just one thing. Similar to their much larger peers, they want to be able to do anything and everything and show themselves as the next Pixar or Studio Ghibli. With the exception of not limiting themselves in any which way or form.