Wherever I Look
Recaps, Reviews, and So Much More
Home MoviesMixed (Divisive) Only Mine (2019) – Summary/ Review (with Spoilers)
Mixed (Divisive)Movies

While a bit of a bargain bin movie, that isn’t to say you may not get a kick out of Only Mine.

Only Mine Plot Summary (Ending on 2nd Page)

Julie is a young girl from a small town named Coldwater Hills. From what we’re told, academically, she is a smart girl, but like many at a young age, she has a blind spot when it comes to love. Hence why, when David comes into her life, she is a bit gaga for him. However, it becomes clear, he is very controlling and willing to use his position as a cop to aide in his abilities to monitor her, what was a nice relationship quickly becomes hell. As seen on Legion, Midthunder is more than capable of holding her own in a scene. But, while we got a lot of ass kicking from her portrayal as Kerry, her role as Julie gives us something different. In this, she is but a young girl who wants to have it all. A job she likes, a future that seemingly will be bright, and a loving boyfriend. Yet, she never gets lost in fitting some an ideal or trope. While Julie wants love and tries to be understanding of David’s insecurities, it never gets to a Debra, from Dirty John, level. Which helps you stay entertained even as many others seemingly refuse to recognize how dangerous David is.

The Way David Is Written & Performed

You know, maybe it is a personal preference, but there is just something about men being obvious with their bad behavior, and people excusing it which is frustrating. Take note, it is a real thing, there are plenty of examples of that. However, in media, I feel like there needs to be layers to that or else it comes off like how David is. Someone who is just blatant and ridiculous to the point you almost wonder if this should be a comedy.

That isn’t to say there is anything funny about the fear David brings to Julie’s life. More so, the way Zimmerman handles David, combined with Young’s writing, takes away from the seriousness of the issue. For you are looking at David’s peers as idiots, David in the same vein as Adam West’s version of The Joker, and wondering what is trying to be said here? 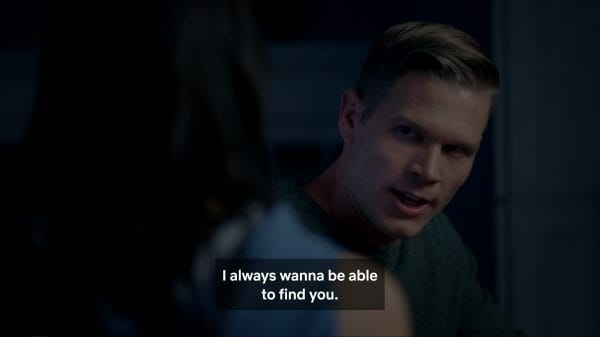 David (Brett Zimmerman): I always wanna be able to find you.

Which is what pushed me to be on the fence about David overall. You have to recognize that some men can act like David, even have a history, yet people will still defend them and call the accuser crazy. Also, there is a need to recognize some become aware and can identify toxic behavior quicker than others. But there is something about the tone of this movie, and Zimmerman’s performance, which doesn’t bring the heaviness you’d expect from a story like this. Especially considering it is based off a true story.

There are honestly times when I feel like I need to check myself and wonder if I’m unfairly holding a film to a higher standard. Especially when it is films like these in which the writer and director don’t have long resumes filled with feature-length productions. Which is why this is being labeled mixed. While there is enough in Only Mine to understand the point trying to be made, I can’t say everyone’s part in the execution elevated this movie to what it could have been. So while taking note of everyone’s experience can be seen as a cop-out, you have to recognize it plays a part in the end product.

Which, ultimately, isn’t me saying lower your expectations drastically. More so, I want you to recognize a lot of people are essentially learning on the job, and that is the stage those involved might be at in their career. Hence why Midthunder’s abilities as an actress do not coincide with Zimmerman. There is a clear difference in experience yet likely, after this production, he’ll get better and might be a bit less awkward. But when it comes to Only Mine, just recognize you aren’t going to be watching the best movie you ever saw. It’s more so something to watch.

While there is enough in Only Mine to understand the point trying to be made, I can’t say everyone’s part in the execution elevated this movie to what it could have been.

This was such an important movie to watch. It profiles how young women can be so easily targeted. I would like for this site to have identified all of the actors.

Racist anti police movie the real villain was not a police officer being protected by WMDs..

Since it was a true story, I would like to know if Gail was charged as an accessory since she kept covering for him? I hope so bc women like that make us all look like we will follow that d## anywhere.

Must have. Could have. You have no business critiquing anything.

I wouldn’t say it was a bad movie. It is not the most wonderful movie you’ll ever see but the actors are fine and I was not bored watching it. I rarely leave comment on movies, I think amber midthunder is doing a good job,she is only 21 and I liked her in 14 cameras. the only part I would have to say something is when characters act stupid and real human wouldn’t act like that in real life. It is a simple movie that can be watched and be enjoyable.

This was a horrible movie. The main actress was sooo bad. Is this her first role ? It was tacky, I saw it was based on a true storie and dedicated to other victims. But damn. They could of seriously gotten some better actors. Must of been a low budget movie.