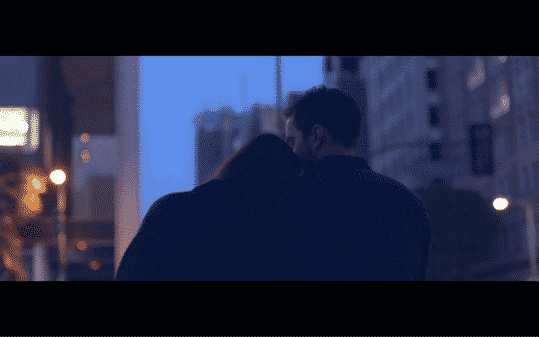 Newness, while it has a certain charm emanating from its leads, struggles to maintain interest during its nearly 2-hour timespan.

After months on a dating app, two young people, Martin and Gabi, find one another. At first through the pretense of there being no strings attached but as both fall into a routine, so begins a relationship, Gabi moving in, and them playing house. However, as with any whirlwind of a relationship, once the honeymoon phase is over, so do the problems begin. Of which get triggered by Martin not revealing information about his ex-wife, Bethany, his mom having dementia, and sister dying in a car accident. It only snowballs from there as the warning Gabi gave Martin early on comes true.

Leaving you to wonder, when it comes to this couple with a good amount of chemistry, will their baggage outweigh their love and can their “layover” not impede the future of their relationship?

“I’m not recommending it, but that doesn’t mean it’s not valid.”

“The saddest people are the ones that don’t know what they want.”

Martin and Gabi Were Really Cute Okay, granted, Nicholas Hoult has pretty much mastered being the male lead in any romance movie. Between boyish looks and this slightly dumbstruck look we’ve seen since he was in About a Boy, his appeal instantly brings about a charm and desire to know what will happen with him this time. But let us not discount Laia Costa. For what Hoult presents in an almost quiet, humble, and almost bashful person, she presents life.

Costa compliments Hoult’s nature and with him quickly and easily molding to whoever his co-star is, there is a beautiful give and take in their relationship. Making it where, whether they are just eating ramen, going to dinner parties, or having sex, there is the kind of intimacy where you can forget these are two actors. Even as things go wrong in their relationship and it becomes clear that these two might not be meant for each other.

No Sense of Time

In quite a few romance films, you’ll notice there is some sort of note of seasons passing or how many months, if not years, the two have been together. I didn’t notice till this film how much that helps the storytelling. It helps you figure out if things are going too fast, too slow, whether you get them getting bored or having troubles since the honeymoon phase was due to be over, or if the people are just fickle.

Yet, Newness is without that. Making it so, outside of perhaps really honing in on Paul’s relationship, in which he mentions years he has been with his partner Quinn, there isn’t much of a concept of time. And considering Paul and Martin’s friendship isn’t made to be that strong and notable, it makes relying on him to know the passage of time unfortunate. Especially as you try to gauge whether we’re witnessing a romance that happened as quick as them swiping on each other or if there is a significant amount of time between milestones.

Friends are important in movies like this since often they are the voice of reason. If not the viewer’s voice in shouting how stupid one of the characters are being. However, there can be the issue of when the character seems to be in this weird middle ground of having their own life, outside our leads, yet not to the point where you want them to have their own movie.

Now, for some, that might seem like a sweet spot, but in Newness’ case, because of the time issue Paul is involved in, and the drama Gabi’s friends are part of, so comes a problem. One in which, when they are injected into a situation, the actors not having the same chemistry with the leads, as the leads do with each other, dampens whatever abilities Eaton or Gubler have. Making them necessary catalyst who we are told have their own lives, but barely hold reason for notoriety for they feel more like a distraction than complimentary. Martin having an ex is understandable, and him having an ex-wife who is the source of a lot of baggage is understandable. However, as Gabi says, there comes a point where she is a ghost in their relationship and as we get a flashback and meet Bethany, so begins you wanting to see another movie. For the Bethany stuff ramps up in the 2nd half of the film, by the time you wonder when is this movie going to be over? However, as soon as we see Klementieff in the flashback and then see her interact with Hoult, so comes a new issue. What we see there isn’t just them being mature, acting like adults, but a complete movie which, at that point in Newness, you’d rather watch.

Plus, it really puts Gabi in a bad position. It makes you feel like Gabi is but a rebound chick who Martin isn’t moving on with, but is using as a means of distraction. Leading you to feel cheated that we didn’t get to see Martin and Bethany’s relationship at its high, the wedding, the miscarriage, and the lows which soon came after. For while Gabi and Martin are cute, and Bethany says she and Martin were just playing house, there comes this strong desire to see the relationship which had a truly profound effect on Martin’s life vs. what actually seems like him playing house.

For a good amount of time, I wanted to compare this movie to Gaspar Noe’s Love, just not as X rated. However, with time, especially as the open relationship bit came into play, I realize that was an inappropriate comparison. If only because, while Hoult’s chemistry with whoever he talks to is strong, and Costa is ever so charming, the story ebbs and flows in such a way which makes you wish it was cut to your usual 90-minute movie. That extra 30 minutes, likely dedicated to Bethany, more scenes with Martin’s friends, and of course, additional sex scenes, feel like they don’t pack the punch needed to maintain your attention.

Hence the mixed label. For ultimately, as the quote above goes: “I’m not recommending it, but that doesn’t mean it’s not valid.” Since those into romance, with a touch of sex and scandal, will enjoy this. Just as long as they are willing to deal with a bloated movie with the usual outline romance films have of starting hot and heavy, one does something stupid, and then one grovels to the other.