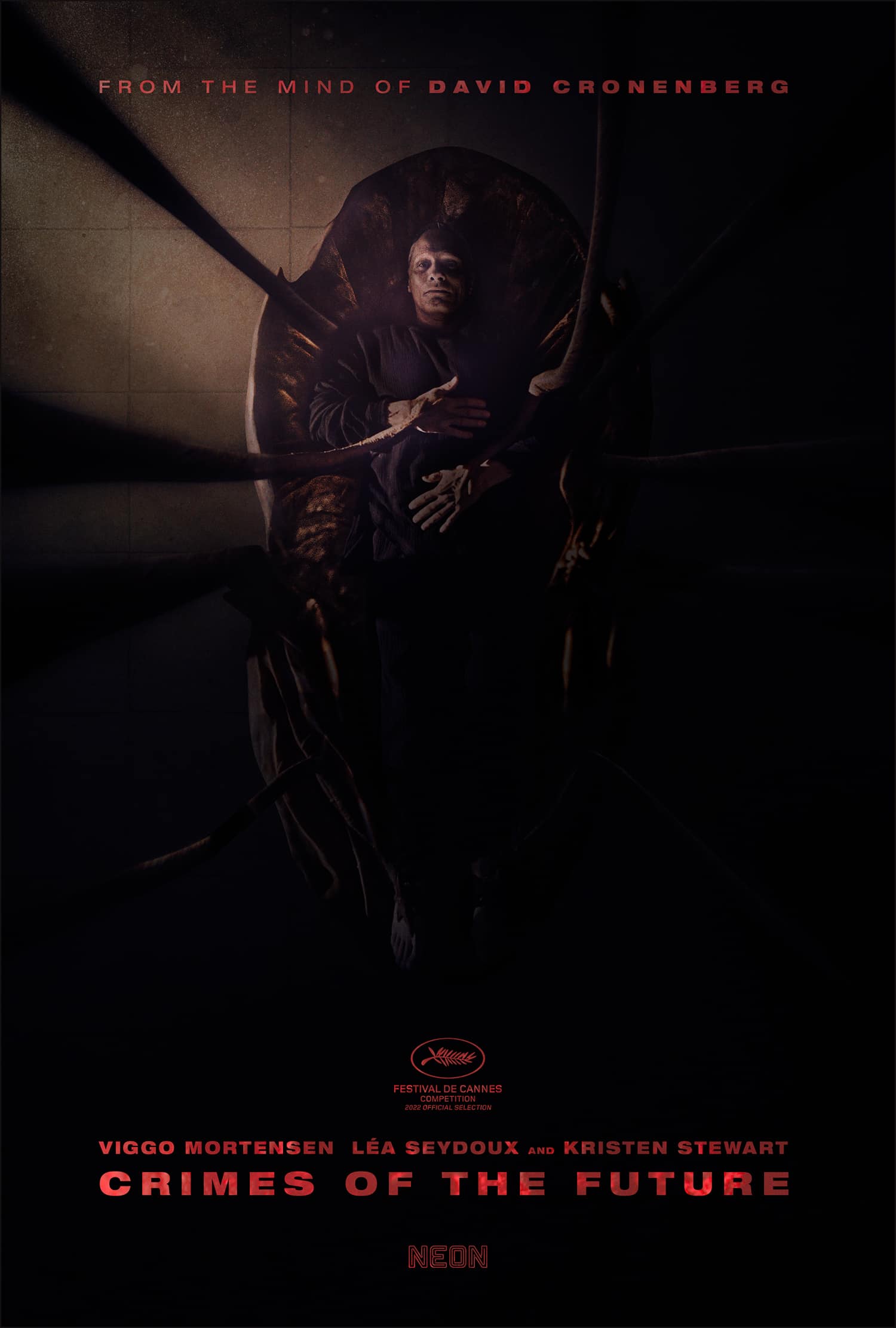 Cronenberg’s latest is a body horror that seeks not to thrill but question the future state of humanity.

Saul is a renowned performing artist. His work with Caprice, a former trauma surgeon, has the public watch as she tattoos and removes tumors from Saul on an almost regular basis. This kind of theater is normal, for with humanity losing its innate sense of pain, cutting open the flesh of another has become the new sex.

But, the story of “Crimes of the Future” goes deeper than that. With pain tolerance reaching an all-time high for most of the population, so comes the question of human evolution and what could be next? Never mind, considering natural selection, what do the powers that be, that is representatives of the government like Timlin, Wippet, and Detective Cope, believe deserve to become potentially permanent parts of the human genome or killed like 8-year-old Brecken?

With multiple assumed tumors growing within his body on the daily, Saul has used to pain of living to make art with his partner Caprice. Though, outside of his art, he is also a bit of an informant for the police when it comes to those who have committed to an alternate lifestyle.

Formerly a trauma surgeon, Caprice now works with Saul to perform events in which she removes and tattoos his tumors for a live audience.

One half of the new detective’s bureau, Timlin is a skittish girl who is quite 0off-putting. However, her knowledge of the human anatomy is so grand that you can see why she was hired.

Wippet is Timlin’s boss, who appreciates the work people like Saul do.

Detective Cope is anti-evolution, and against the cult Lang is a prominent figure of, so he asks Saul to learn about them.

Lang is the leader of a group that is trying to modify humanity to live off of plastic rather than traditional food.

Brecken was Lang’s son, who he believed represented the future of humanity.

You Can Find Meaning In The Grotesque

At the heart of “Crimes of the Future” is the study of the human condition and where it is going. People have numbed themselves to the point that sex is meaningless, and they need something heightened, like violence, to get off. Trauma bonding is more romantic than anything old fashion, and mutilation isn’t something grotesque but theater. For like those in the movie, you are entertained by the cutting of flesh, the increasingly meaningless depiction of a nude body, and watching someone twisted in the mind slice it up.

So with that in mind, “Crimes of the Future” puts a mirror to society and questions if it sees itself?

At Times, It Seems to Lean On Shock Value

I would never call “Crimes of the Future” a movie to just see because there is nothing else to do. It’s not a general audience type of movie. Yes, it has notable stars like Kristen Stewart, Viggo Mortensen, and Léa Seydoux. But even with them having notable performances, including Stewart playing herself in a twitchy way, it’s easy to get lost in Mortensen’s sickly character coughing and struggling to breathe or Seydoux and Stewart both finding the cutting of flesh orgasmic, but Seydoux’s character able to embrace it while Stewart’s character, almost in a comical fashion, can sometimes barely contain herself. Almost like a Batman villain giddy over the chaos that’s about to ensue.

But, while you can see how “Crimes of the Future” wishes to explore the human condition and what’s next for a lifeform that is cutting away at itself, the spectacle of consensual violence can be too much. Not in terms of being so violent you feel disturbed, for even with people cutting into each other like junkies on the street, that isn’t bothersome. More so, you could easily see this film as so dedicated to the use of scalpels and other blades that everything else it wants to say may or may not be the focus.

It’s almost like an action movie that wants to get the pazazz so right, the story can sometimes feel secondary. You get the point of Saul’s work, whether as a performing artist or working with Detective Cope, isn’t meant to be overanalyzed. Can you make a think piece about that, or Lang asking Saul to publicly perform an autopsy on his son? The desire to showcase what Lang believes is next for humanity? Yes.

However, like most movies that use what is commercially alluring to try to say something or do something, the genre isn’t known for, in an effort to gain the attention of the masses, you could submit it loses what needs to be said to keep those who would have watched the film without the theatrics.

While interesting at times and having some desire to say more than the average body horror movie, “Crimes of the Future” ultimately seems so focused on the gore that it can’t truly penetrate the various topics it wants to focus on when it comes to humanity. Be it what it will mean to be human in the future, or with us becoming so numb to violence, how that will affect our senses, our feelings, and our ability to connect to another person in the simplest of ways.

Specialty Market: “Crimes of the Future” isn’t the type of movie to just go see because you have nothing better to do. It’s the kind of film which is made with the mindset that it is art. So while it pursues a commercial way to get attention, through the tease and depiction of human mutilation, it can sometimes feel like it will overstay its welcome as it teeters between its “WTF?” factor and conversation about the future of humanity.