Charming at times, while sometimes making the mute button necessary, It Takes Three keeps you engaged despite knowing how it will likely end.

After his prom rejection goes viral, Cy thinks he needs plastic surgery. He is entirely convinced he must be ugly, for why else would someone reject him like that? So when a guy named Chris recruits him to woo the new girl, Roxy, and promises him the money needed for plastic surgery, Cy jumps on the chance. However, he didn’t plan for falling for Roxy in the process or how much his focus on Roxy would mean sacrificing his friendship with his childhood friend Kat.

Cy sees himself as the average guy, and after being rejected, he feels like being average isn’t good enough. So, to the chagrin of his moms, he plans to get plastic surgery. However, with no way to pay for the procedure, he sets aside his morals and commitments to help Chris get with Roxy.

Famous locally due to his comical videos, you can tell Chris hasn’t worked on his personality much because he didn’t have to. So when it comes to young women like Roxy, who aren’t impressed by his muscles or charm, it’s discombobulating. Hence, he chose Cy to manage his social media and craft him a persona, more in line with what Roxy could like so that he could hopefully secure a relationship with her.

New to the area, but by no means desperate for friendship, Roxy is well-read, into art, and even an artist herself. Also, she is sympathetic to Cy, whose embarrassment went viral and seemed like she wouldn’t mind becoming friends with him and Kat. However, with Cy using their acquaintanceship to advocate for Chris, he might have burned a bridge.

Since the fourth grade, Kat has known Cy, and she has been his best friend ever since. Which was a mutually beneficial relationship since he’d help her practice trombone and would show up for her. However, as Cy starts to fall for Roxy, Kat begins to lose the reciprocity of her relationship. Thus leading you to wonder if Cy will abandon one of his only friends for a girl he has lied to for money, until he realized he liked her.

Principal Hendrix is the cool principal who curses, is honest, and is also a pretty good musician.

While the love triangle can be seen as problematic, you could submit that while watching Cy and Chris fawn over Roxy, she reminds you, and Kat as well, that if you like someone, you need to be yourself. For as much as you can mask who you are by conjuring up the words you think they want to hear and pretend to be aligned with what they like, you can’t maintain that forever. And the longer you do, the longer you avoid them getting the chance to fall in love with you vs. the representative you put in front of them.

But, alongside that, one of the things the film also pushes is that, just because someone doesn’t like or appreciate you, it doesn’t mean something is wrong with you. You are not ugly because that guy or girl doesn’t reciprocate your feelings. Also, even if you aren’t symmetrical or have a chiseled body, someone likely romanticizes that.

However, if you instill the narrative of how flawed, ugly, or unattractive you are, sometimes people won’t get to discover the beauty they could see in you. For with you beating them to the punch, now your toxic views of yourself have permeated their thoughts, and now they can’t see you beyond how you see yourself. Thus ruining what could have been all in the name of self-deprecation.

How Roxy Is Crafted

Romance films are in a bit of a weird place. With many trying to avoid creating yet another manic pixie dream girl or stepping stone female lead, increasingly, we have gotten this feminist character who is defined mainly by how politically correct she tries to be. Thankfully, Burdick and Mastbaum seem to have found a balance between Roxy fighting against misogyny but not building her character around finding ways to battle against the patriarchy.

Now, don’t get it twisted, Roxy often keeps the film from venturing into BS territory by calling out Chris and keeping Cy from being simping. But, perhaps the best thing she does is allow you to see things from her end, and not just from the boys. She doesn’t like Chris, but he is pursuing her, and because guys who maybe match her intellect like Cy are too shy or insecure, that’s who gets the multiple chances to screw up.

This isn’t something strongly focused on in this film or romance films in general, but it does make it so Roxy can be seen as a main character in her own right. She is new, her mom works late, so while she isn’t lonely, she does like the option of having someone to talk to and hang out with. Especially since she has interests and between going to community college, art galleries, and clubs, she would like to share the experience and talk about them.

However, with Cy questioning how good he looks and not making any moves, and Chris making some kind of effort, even if it ultimately is a lie, it’s something. Not what Roxy deserves, but the overall point the film seems to want you to recognize is that making an effort is key, and sometimes persistence is good and, other times, you need to cut your losses. Either way, if you do nothing, then you will only have yourself to blame.

While You May Not Learn The Name Of Some Supporting Characters, They Leave An Impression

Some characters you never catch the name of, like the kid who has a school news program, but others, like Principal Hendrix, who can be seen as a bit eccentric, you adore them to the point of wanting more. Especially as they surprise you with what they say or, in Hendrix’s case, a musical performance. But we must admit we appreciate people like Principal Hendrix being established enough to remember them, but not so much you feel cheated by not getting to know them more.

It Takes Three excels by giving you a basic catfish plot on the surface while having deeper meanings if you seek to find them. Be it focusing less on the superficial and connecting with people on a deeper level, how important it is to take the initiative, or recognize you aren’t for everyone and everyone isn’t for you. The combination helps make it a smart romantic comedy that sidesteps a lot of the problems its peers get into by only taking what it needs to from the familiar and venturing off to be unique whenever possible. 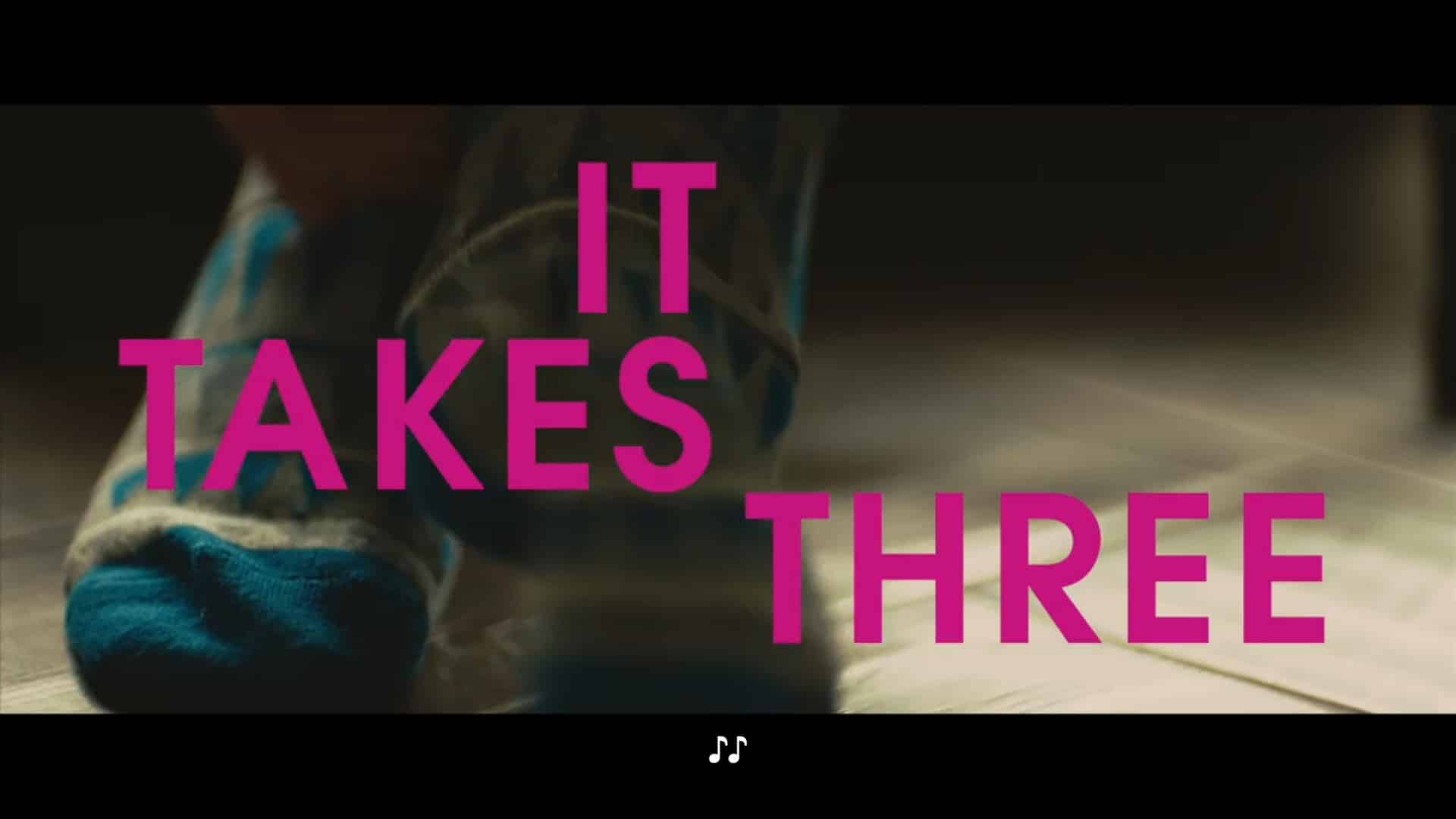 It Takes Three (2021) – Review/Summary (with Spoilers)
Who Is This For?
Those who enjoy a catfish romantic comedies that can keep things superficial and silly or go a bit deeper and explore the insecurities which come with dating and rejection.
Highlights
Find The Person Who Finds The Beauty In What You Perceive As Flaws
How Roxy Is Crafted
While You May Not Learn The Name Of Some Supporting Characters, They Leave An Impression
Disputable
83
Follow Wherever I Look on Twitter and Instagram, Like us on Facebook, and Subscribe to the YouTube Channel.