Home Movies All My Life – Review/ Summary (with Spoilers)
Movies

All My Life – Review/ Summary (with Spoilers) 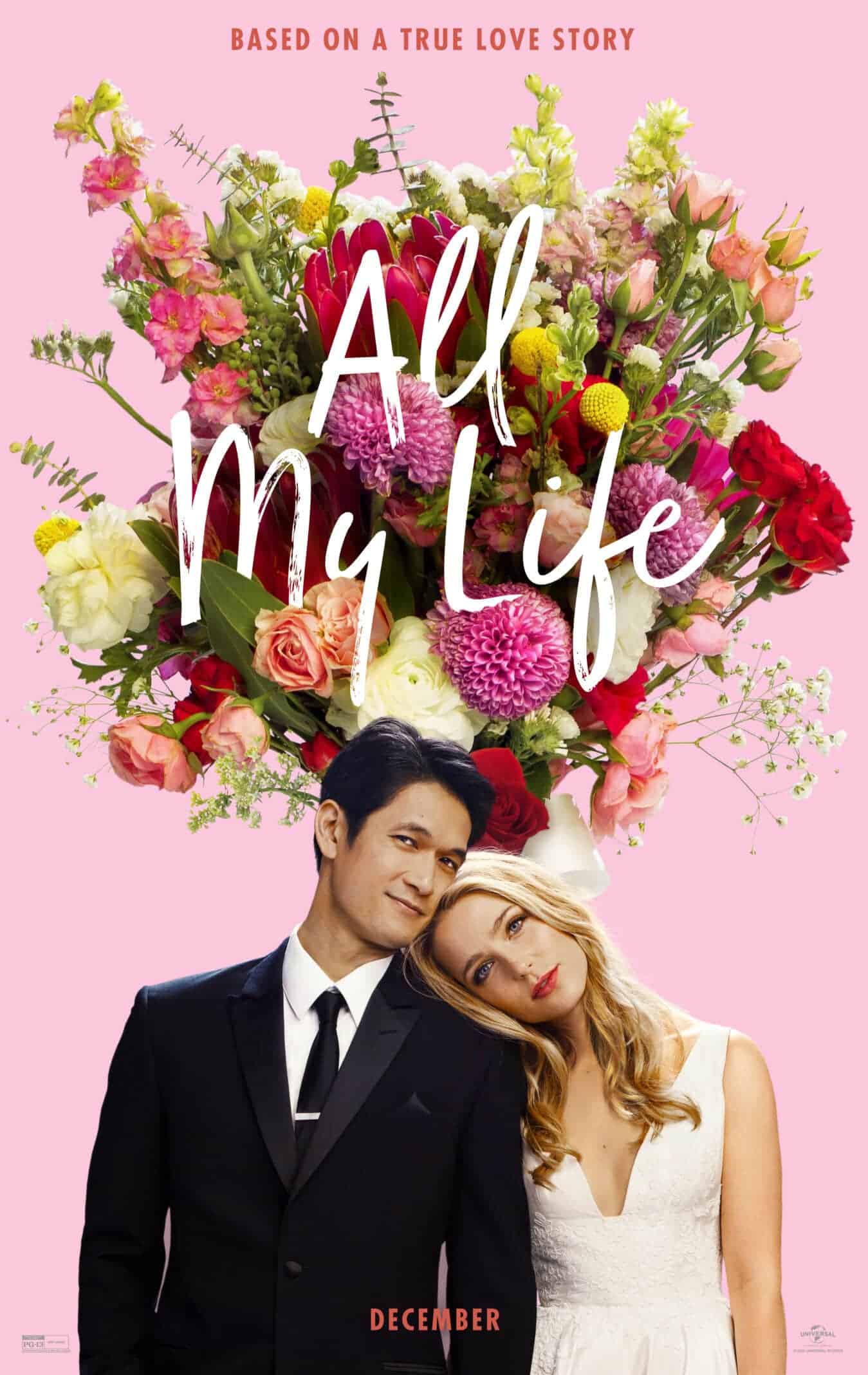 “All My Life” avoids any opportunity to develop its characters as it focuses on crafting an enviable romance.

It was a chance meeting started by one of Sol’s friends trying to chat up Jennifer’s. However, in the end, it was those two who hit it off. Sol enjoyed Jen’s smile, her effort, and how silly she could be. Jen enjoyed Sol’s cooking, his athleticism, and that he would join her in fun moments.

As you can imagine, love bloomed, and things got serious. Jen’s investment in Sol led to her pushing him to follow his dreams and even move in to save money. Sol’s investment in Jen well, it led to him proposing. But what started as a liver tumor grew into full-on cancer, so with a diagnosis of 6 months to live, Sol and Jennifer tried to make the best of it.

When we meet Sol, he has worked at a marketing firm for a year and absolutely hates his job. He feels overworked, uninspired, and more focused on the logic of needing a paycheck than focus on his passion, which is cooking. Something he has done in past jobs, and even when he was a teenager. One of his friends jokingly say that Sol was limited to deserts just so he wouldn’t outdo his dad with making gourmet carrots.

And it is through cooking that Sol wins over Jennifer. Someone who does fall in love with him rather fast, but with Sol backing that up with so many valid reasons to love him, she feels safe and validated in her choice.

When introduced, Jennifer was a psyche major not looking for a boyfriend, but then while Sol’s friends tried to chat up hers, she took note of Sol not trying so hard and followed him when he left the embarrassing scene his friends were developing. From there, they hit it off and quickly became each other’s everything. Which lead to their friend groups melding, maybe dating (it isn’t made clear if anything happened for sure), and Sol even meeting Jennifer’s mom.

Thus, Jennifer finds herself in an ideal, almost fairy tale relationship. One that, in the film, rarely, if ever, leads to any serious arguments. Beyond Sol, on the rare occasion, not living life to the fullest.

Without any doubt, Shum Jr. and Rothe made the absolute perfect couple. Shum Jr’s smile, easy-going nature, it matched Rothe’s humor, and the way they play off each other made each scene seem effortless. Almost as if the human being Jennifer was based on gave, down to the minute detail, how she and the real Sol fell in love. This leaves you feeling, multiple times in the movie, a nice high as the two fall deeper and deeper in love.

But, on the flip side, watching Sol struggle with chemo and radiation, and it becoming frustrating because he is getting the side effects but not the cure, it hits you. Especially as you note how young they are, how perfect everything seemed, and yet it is ending so abruptly. And because of what Rothe and Shum Jr bring to their characters, they make even generic scenes like someone yelling and beating a car wheel feel like the first time you’ve seen it done. That is, as opposed to a moment often used to amplify the situation.

Making it so, ultimately, thanks to these two, while you’ll never cry to the point of heaving, you will shed a tear or two.

Who Are These People and Why Are They So Perfect?

One of the things you can undoubtedly say about All My Life is that it doesn’t contain much fluff. In fact, it cuts a lot of the fat and tropes other romance films have. For example, in terms of developing its characters, that is done to the minimum. Jennifer and Sol’s best friends are established enough to at least differentiate them by looks, in terms of Jen’s friends, and by one or two traits, when it comes to Sol’s.

As for the leads? Well, Jen is in college, pursuing a master’s in psychology, and she has a relationship with her mother. As for where is her dad? Who knows. How does she afford her apartment, considering we don’t see her work a single day? Again, your guess is as good as mine. Heck, did she drop out of school when Sol got sick? Those questions, and so many more, are passed over to focus on who Jen is within her relationship. Meanwhile, who she is as an individual becomes an afterthought.

The same goes for Sol. We learn he loves to cook, and that is about it. Everything else with him is about making him likable. Heck, we don’t even get to meet a single member of his family and are led to assume, since Sol is one of the few Asian people who have a consistent role in the movie, maybe some of his family members showed up at the wedding. As for whether it was an aunt, cousin, or any notable title? That isn’t made clear.

From what it appears, the sole wish of the film is to focus on the love Sol and Jennifer had, and establish that, yes, Sol did die, but even when dying, outside of a few moments, he never stopped being this ideal. Heck, alongside him, Jennifer never stopped being an ideal. Which, if any other actors played Jennifer and Sol, would have made this film corny to the point of coming off like a Hallmark movie. Yet, those two, even with playing characters without any flaws, eek enough out of Jennifer and Sol to, not necessarily make them their own but bring the real Jennifer’s story to life.

The Pacing & How The Story Is Crafted

Along with not putting much effort into developing its characters, All My Life doesn’t really try to let moments breathe. Rather, it presents a whirlwind romance that thankfully hooks you but can be jarring. Again, not because you don’t believe the romance, but because you feel that all you get is the highlight reel. And even when Sol is dealing with cancer, the way the film establishes that but puts it in the background, similar to the supporting characters, it can throw you off a bit.

Mind you, the director and producers didn’t want this to be about a person dying. That was never the point. However, with the story avoiding conflict, only allowing sad moments for as long as they had to, it makes it so you almost feel like real moments get undercut so we can jump to the next cute romantic scene.

All My Life is being labeled as mixed because it doesn’t care about the leads as individuals. Its sole focus is building and developing the relationship between them and using the supporting characters to create grand moments. And while Rothe and Shum Jr., despite having barebone characters, get you to emotionally invest in Jennifer and Sol, the lack of flaws, solely focusing on the ideals in all situations, it devalues a lot of what they bring to the film.

Ultimately leaving you with a film that desires to be simple and pure, and in the process of doing that, not realizing it takes away what makes this story worth telling. For when it is all over, while you will remember how Rothe and Shum Jr. made you feel, Jennifer and Sol, alongside their friends and Jennifer’s mom, will be forgotten. All due to you only getting to know about the relationship they were in or witnessed, and only a few tidbits about them.

All My Life Ending (Spoilers)

Sol dies. He never gets better, Jennifer doesn’t get pregnant and at least have a child by Sol, he just dies. Which, by the way, you don’t get to see. All we hear is Jennifer give a eulogy, and we skip the funeral and just watch Jennifer walk her and Sol’s dog and go to a bar called “Now or Never,” which was a saying Sol and Jennifer had.

Now, as for why they named the bar that? Well, there is a time jump that leaves a lot of things unanswered. Also, does Jennifer have a stake in the bar? Again, things not put into detail, like whether Sol ever had aspirations to possibly co-own a bar with his friends?

And, of course, Sol’s family is entirely left out. How they dealt with losing him isn’t explored at all. Because, the people who raised him to be the guy Jennifer loved, who cares about them, right? It isn’t like they were affected, and I guess they didn’t play a role in Sol’s life, besides giving him his name. It was all his three friends.

Does All My Life Have Sequel Potential?

Unless it is decided to do something similar to I Still Believe and show Jennifer’s life as a young widow who finds love again in time, I’m rather unsure what sequel this could produce. Unless it decides to fill in all the blanks this film has.

Who Are These People and Why Are They So Perfect? - 74%

All My Life doesn't care about the leads as individuals. Its sole focus is building and developing the relationship between them and using the supporting characters to create grand moments. And while Rothe and Shum Jr., despite having barebone characters, get you to emotionally invest in Jennifer and Sol, the lack of flaws, solely focusing on the ideals in all situations, it devalues a lot of what they bring to the film.