Chris Rock, thankfully, brings a comedy special light on Trump and while it delves into his personal philosophies, he doesn’t turn his standup into a college lecture.

Chris Rock, after 10 years from his last special, proves why his name is amongst legends. First and foremost by not delving too much into Trump and his regime because, let’s face it, anything and everything that could be said has been. Instead, we get conversations about his mixed feelings on cops, how ridiculous he finds the idea that all kids are special and that their schools are bully-free zones, and he talks about how he is prepping his daughters for white America.

And yeah, of course, Rock talks about race. His bread and butter is racial topics. But when he asks rhetorical questions there isn’t this vibe he is moaning and groaning. If anything, he is making statements to remind you of the BS. Such as this idea that “Black men are an endangered species.” He promptly reminds you that if they truly were, the government would protect them.

And to finish off the special, he veers into religion and relationships. He presents himself as almost a sort of agnostic in how he observes Christians and the concept of God. While, when it comes to relationships, he talks about taking responsibility for why his marriage ended, but also providing a slew of warnings and red flags you should look for. As well as reminding you the importance of playing your position.

“Every problem you had today, you had when you met. But you were fucking so you forgave.” 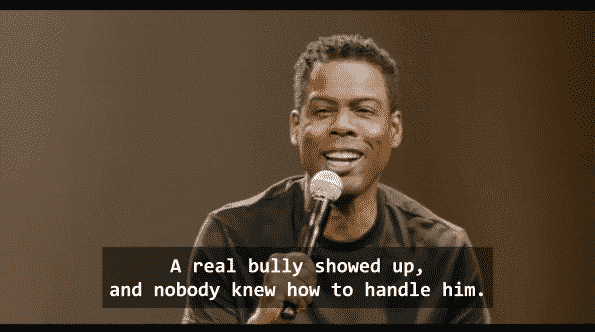 Trump is only mentioned twice, and they are for short jokes. I don’t know about the rest of you, but I was so thankful for that. Especially since I grew up in the George Bush Jr. era and remember how making jokes about him was like jokes about Michael Jackson. Everyone was doing it and there was barely enough of a difference between each comic to make any joke seem fresh. So Rock sidestepping that, letting other people take that lane, was a blessing.

There are a lot of similarities when it comes to quality stand up, poetry, and rap. One of the main ones is flow. Can you reach point A to Z without losing your audience in the process? Especially since most of what you are performing is personal and hence, complicated and leaves you in a vulnerable position. Not everyone can do that.

Rock, however, treats it like an old hat to him and you can see it in his delivery. Unlike other comedians who bounce around on stage to show how passionate they are about something, you can hear and see it in how Rock controls himself. There is an immediacy in his annunciation and his pacing is his way of showing how he is bursting at the seams. He knows he is funny, but doesn’t have this uncontrollable desire to laugh at his own jokes as if he hasn’t said them dozens, maybe even a hundred times.

What Rock shows us is a true performer who has the capabilities of being more than a stand up comic or playing roles in comedy. Which, I know, considering his track record may raise an eyebrow, but I do think Rock is approaching that point in his career where he can address not just the laughter behind the pain but the pain itself and bring that to a role.

While comics with a Christian background joke about the church and the antics which go on, they don’t necessarily question their beliefs that much. At least, in terms of the comics I’m aware of. However, with Rock arguably being agnostic, he addresses some questions. Like the idea of God being perfect yet needing a day of rest. When you think about it, that does not make one lick of sense.

Then when it comes to raising kids, his points about how bullying is a part of life and shielding kids from every little thing makes them inept adults, presents a comical joke and something thought-provoking. Especially as he relates to how that led to the rise of Trump. Also, him conveying how the whole, “everyone is special” idea is just nonsense.

But it is also his piece on relationships which is interesting. Mind you, most of it isn’t groundbreaking by any means. That is, whether he is talking about his relationship with his ex or him dating at his age. However, what you have to appreciate is that he doesn’t turn it into a therapy session where, in the midst of reminiscing, he loses you to his inner thoughts. More so, Rock presents himself like a friend venting to you about his mess ups and him trying to pick up the pieces, while recognizing his part in it all. But, being that he knows you don’t have the patience for whining, he keeps things light and funny to maintain your attention.

The way Rock presents himself and his set, it doesn’t feel like the grand return of one of the veterans of comedy. It comes off very casual, professional, but not like Rock was trying to have a Jay-Z “Allow me to reintroduce myself” kind of moment. It’s the quality you expect of Rock but it doesn’t necessarily feel like this is something next level or a new classic in his repertoire. While Rock may not seem like he is shifting his comedy to the next gear, Tambourine has the type of quality which does make it seem like he never left. The jokes are topical enough to not make the special seem dated or that Rock maybe rusty and he continues to show why his point of view has made him a comedian often put on a pedestal.

Hence the positive rating. Rock exhibits what you expect out of a veteran. Consistency, professionalism, and it being clear to longtime fans that while certain things he may not do anymore, that doesn’t mean you’re getting a toned down performance. If anything, I’d argue that Rock is coming to the point where, if he wanted to, you could foresee him maybe doing one-man shows in a similar ilk to John Leguizamo if he wanted to. Chris Rock takes the stage in Brooklyn for a comedy special filled with searing observations on fatherhood, infidelity and American politics.