Commander Lawrence begins to reveal his intentions to us and to say, even after an hour, they can seem ambiguous, that’s an understatement. 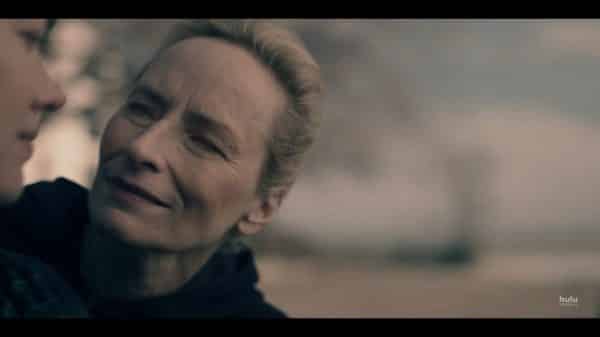 With feeling betrayed by Fred, and setting fire to their bedroom, Serena decides to take some time to herself. To go spend time with her mother, Pamela (Laila Robins), who, honestly, isn’t really there for Serena as she would like. Not because if Serena abandoned Fred it would affect her, that doesn’t seem the case. More so, she recognizes how privileged Serena is, so she doesn’t have it in her to coddle her child. So she just pushes her to reconcile and get over whatever feelings she has and get with the program.

June has, relatively, gotten away with a lot thanks to some sense of charm and intellect, and it seems she wanted to test this on Commander Lawrence. Problem is with that, he isn’t like the members of the Waterford household. A bit of charm and attention doesn’t do much for him – if anything at all. However, just to make sure she still has it, June does work her magic on Fred, Nick, and even Serena when they visit.

From Fred, she learns Lawrence is considered a visionary and nearly all commanders find him hard to read. When it comes to Nick, who is heading to the front lines, she is upset by little he can do for her and really goes off on him. Yet, before he leaves, she does her usual mind games of pushing him away then drawing him back in. As for Serena? Well, with her so distraught over Nicole, she looks to June for the sympathy her mother won’t give, and June twists this to manipulate her. To push her to see the plight of the handmaids and maybe use some of her, Serena’s, influence. Which, of course, she is hesitant about doing, but June may have planted seeds that will take root.

When it comes to Commander Lawrence, it seems he operates on two essentials in his household, maybe three:

June quickly learns about the third one and doesn’t dare pursue that option, and in episode 2 she showed her willingness to tell the truth – so they are good on those two points. However, the boring him part is a bit more difficult for her. Primarily because she tried to pull a sense of charm on Joseph (Commander Lawrence) and he found it laughable. Yet, while he sees June as a lower form than Emily, who he thinks is brilliant, he does question if she can become useful.

How? Well, as seen, Joseph’s allegiance is questionable. He enjoys the comforts of Gilead and seems to hold many of the misogynistic beliefs. However, when it comes to Emily, it seemed she was either an exception to his beliefs or else his praise can be seen as a veer behind his ruse? It’s hard to say. For even with him noting he knows and is fine with Beth having her little network, to let off steam, there isn’t an easy way to determine what are his long term plans.

What does become clear though is that he has no issues having June, like Beth, have an outlet for her misgivings. Hence him challenging her to have a leadership position. One in which, after the battle of Chicago, she finds herself getting to pick 5 women to become Marthas. This task, originally, she didn’t want, but it seems she realized, with having access to the professions, strengths, and pasts of each woman, she realized what Commander Lawrence might be doing. He just might be prepping her to become a leader. Including prepping her for the hard decisions which will leave some dead. Perhaps like the new girl Sienna (Sugenja Sri). 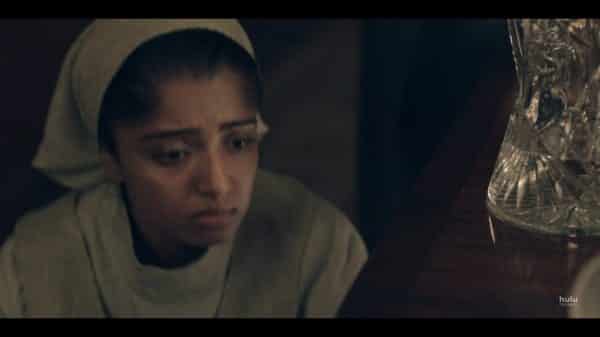 While Aunt Lydia has had a certain amount of intrigue when it comes to June, generally speaking, those two don’t get along. Then, when it comes to Nick and the Waterford household, June was portrayed as this manipulative genius. However, the way Joseph puts it, they were simple, and it takes more than some box wine potent seduction to woo him. Which, honestly, I’m so happy for.

The main reason being, I’m tired of June winning over people so easily and screwing over the majority of them in the process. Take the Waterford household – the fact she drove Serena to the point of losing a finger and burning down her house is crazy. Yet, on top of Joseph calling June out, you can see he wants her to continue, within reason.

However, how far he wants her to go is the big question here? Does he want her to gain traction to the point of having a Mayday sort of team? Is he recognizing it is better to have a rebel under his eye, giving her an outlet, then pushing her to be secretive and him not knowing what is going on? 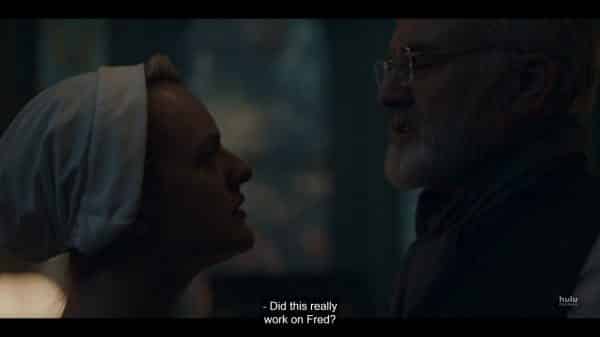 All of this is to say Joseph brings some much-needed intrigue as it is unclear whether he is just trying to keep stimulated or if he might be willing to contribute to the revolution.

I’m so glad her mother didn’t coddle her and called her a spoiled brat. Don’t get me wrong, a part of me feels for Serena since she never wanted Gilead to become what it is. Yet, there is a need to hold her accountable and recognize she is feeling the smite of karma. So all those tears, they didn’t make me feel a thing for her. Heck, considering she was one of the original architects of this system, I expect and hope more – even if she becomes a tool in June’s rebellion. For we’re at the point when someone major should or needs to die, and with them avoiding even allowing Aunt Lydia to be dead, the next best thing would be Serena.

In the book, Serena was not directly involved in the rise of Gilead. Before the fundies took over, she was a singer, talk show host and televangelist. Although she preached a return to “traditional family values” as part of her schtick, her work wasn’t in any way connected to the Sons Of Jacob organisation and she was totally ignorant of their plans. She had no say in their design and was just as shocked as the protagonist when America became Gilead, though her wholesome public image meant she was better treated than most once the fundies took over. It is ambiguous in the book when exactly she married Fred… but in the TV series, she knew about The Fundies taking over from the beginning and had a say in the strategy to bring down the US government, even if she didn’t contribute any ideas to the structure of the new society that’d be created. This raises the bar much higher for Serena being redeemed… the Serena of the novel was just guilty of muttering vague Christian-conservative platitudes on TV, and then being less than enthusiastic about putting these principles into practice in her own home, she was a hypocrite, but not necessarily an active traitor…. the Serena of the TV series was actively complicit in people being murdered, tortured and abused.

The second change they made to Serena… in the book it is implied that she was not sincerely religious and was just a huckster using televangelism as a ticket to fame and fortune. She doesn’t show any guilt that The Fundies have put some of her professed principles into practice and is just annoyed that all her wealth and social status has been taken away. She never makes any effort to help anyone unless it benefits her… the Serena of the series is sincerely religious, and was motivated to do all these terrible things out of a misguided sense of idealism. She also didn’t fully understand what the consequences would be and once she finds out she does feel some measure of genuine guilt, as well as doubt… Yvonne Strahovski is trying very hard in conveying Serena’s remorse too.

So yeah, the TV-Serena is in some ways better and some ways worse than novel-Serena, and I agree… at this stage, given all she’s done, probably the only way she could satisfactorily redeem herself is to perform some act of resistance that involves sacrificing her own life.

Also agree that Bradley Whitford is probably the most interesting thing going on here… both because of the unpredictable weirdness of the character, and the tasty ham n’ cheese of Whitfords performance.