Though its film franchise doesn’t even have a 3rd movie, The Equalizer has again been remade, but this time as a series – one that Queen Latifah puts her own spin on.

For most of her life, Delilah thought her mother, Robyn, was a big shot at a non-profit, traveling the world to help people in need. Well, she was partly right. The truth is, Robyn McCall was a CIA agent who did her job and did her job well. However, after one assignment went awry, leading to two agents and half a village dying, she called it quits.

However, a month later, her old boss, William Bishop, gets in contact with her asking if she’d like to be private security or maybe rejoin the CIA? Neither of these ideas really appeal to Robyn but, after coming into the life of a young girl named Jewel, someone framed for the crime she witnessed, Robyn changes her mind. She decides, rather than join her old boss or rejoin the CIA, Robyn chooses to hook up with two old friends, a former sharpshooter named Melody and her hacker husband Harry, to start her own thing. Thus, Robyn becomes The Equalizer. In retrospect, one of the things we wished Denzel Washington’s first outing as The Equalizer had was a Black girl. For as many noted with the symbolism seen in Quentin Tarantino’s Django Unchained, there is something about women of color getting to be that princess waiting for her knight in shining armor you don’t get to see often. So, in a way, Queen Latifah’s version of The Equalizer feels like a bit of course correction, with her first case being Jewel’s. For seeing a Black woman rescue a young Latinx girl, possibly afro-Latinx, it warms your heart. It makes you feel that, as nice as it would be to see a man of color do the rescuing, women can also rescue each other.

Also, it makes you wonder, while you know women, women of color especially, won’t be who Robyn focuses on exclusively, will they be the main ones? Heck, will people of color be? Especially considering the climate we’re in? For the narrative of Black women often saving America is already in place, so why not have a hero like Robyn be one of the additional faces which symbolize it?

I mean, we saw how Detective Dante nearly had a girl put away because of how powerless she was, and of course, there are so many cases of wrongful convictions and accusations. So, while I’m not sure how the average person will find Robyn’s message offering help, I think Jewel set a high bar as the first client, and the people behind The Equalizer better not struggle to maintain expectations. 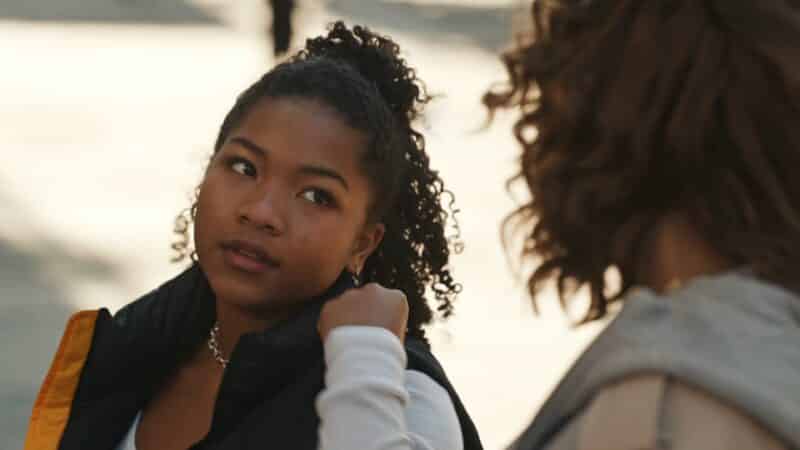 One of the reasons we love Delilah and Robyn’s relationship is the mother/daughter factor. On Twitter, @imaginarymargo and I have gone back and forth about the lack of mother/ daughter relationships between Black women and girls, on TV or in movies. Delilah and Robyn may help fill that void. You have this young girl, partly raised by her Aunt Vi more than her mother, thus there is a strained relationship. Add in a divorce, teenaged rebellion, and you can see Delilah has reason to head down the wrong road.

However, rather than whip ass and move on, Robyn connects with Delilah or tries to. And it is in seeing her make an effort, multiple times in the premiere, that draws you into not just the relationship as is, but what it can be. Because you know Delilah is going to figure out what her mom does sooner or later, be it due to being nosy or getting kidnapped. So building up the relationship now, making Delilah what keeps Robyn grounded and having something/someone to come home to – it gives The Equalizer a lane to compensate for the lesser offerings of the series.

The Action Is Eh

While The Equalizer has a good story and characters, its action is uninspiring. Many jump cuts hint at fancy edits more than Queen Latifah, or her stunt double, really kicking someone’s ass. And all the flair and the calculated manner we saw with Washington’s take? That is entirely absent here.

Which, I get, this is a different take on the premise, so expecting Washington’s Sherlock Holmes style of kicking people’s asses wasn’t guaranteed. However, what we got instead was disappointing and further pushes whether this should have been treated as an original idea? One that people may compare to The Equalizer but, without having the name, didn’t have to live up to expectations that it may never do – at least in terms of combat scenes.

What’s going to hold back The Equalizer is going to be if it continues to have lackluster action scenes. For unlike the films, we have characters with storylines and backgrounds that make you want to get invested. However, with the precedent Washington previously set, which was all action and minimum story or character development, it’s hard to not feel like they swung the pendulum to the other extreme.

But with this only being the first episode, maybe things could improve with time? Hence us giving The Equalizer a “Watch This” rating. The main flaw the premiere presents is a fixable one. So considering all the potential from the storylines to relationships between characters, the only way The Equalizer can become bad is by being lazy. Specifically, by trying to rest on the franchise’s name rather than its known actors, finding strong guest stars, and giving both the leads and guest stars stories that continue to get you invested.

[...] the only way The Equalizer can become bad is by being lazy. Specifically, by trying to rest on the franchise's name rather than its known actors, finding strong guest stars, and giving both the leads and guest stars stories that continue to get you invested.