Funny, touching, and strangely not over the top, Single Parents find a way to balance the pain and joys of raising a kid by yourself.

For varies reasons, Miggy, Douglas, Will, Poppy, and Angie are single parents. For some it was death, for others it was because divorce or being left. Either way, raising one, in the case of Douglas, two, kids is hard. So, this group has banded together to help each other out. Be it carpooling, babysitting, or maybe even helping each other stay out of the vortex. Something their newest member, Will, was clearly stuck in.

Now, what is the vortex? Well, when it comes to Will, it was basically making his whole life about his daughter Sophie. Something he gets dragged out of by going on a Tinder date, getting rid of some mermaid bag, and him being welcomed into the group since he sorely needs a support system. Which is what they all needed for whether we are talking about Rory, Poppy’s son, needing a male figure in his life, or Miggy understanding how to deal with a baby, clearly, these people can’t survive on their own and have happy kids at the same time. On networks not dedicated to kids, especially during primetime blocks, kids are best seen but not heard. However, the kids on this show are written in such a way where they don’t seem like they are around purely for one-liners. Each one has a bit of a personality and shows the effects of being in a single parent household. For Rory, while Poppy tries her best and is a soldier, her son is someone who is into fashion and wants someone like Douglas in his life. Not because just because he is rather stylish, but because he is consistently around. Also, when it comes to Douglas’ twins, they want someone like Will. A father who would sing to them, dance with them, and not be such a curmudgeon.

And it is with seeing those three have needs, seeing how their parents are molding their personality, that these kids don’t necessarily seem to exist just for the show’s namesake. They matter too in the long run and have their own stories that will get developed.

The Diversity & Interdependence of the Adults

Beyond racial diversity, we have different types of jobs, ages, attitudes towards parenting, and also each parent has a different dynamic with one another. Making it where you realize, these people aren’t so much friends as they are reliant on one another. Which isn’t to say they aren’t friendly. Poppy and Douglas are friendly, Angie is cool with Miggy, though he can be a bit strange, but they don’t seem like they were chummy before all this happened. The group was made and lives due to necessity, and the fear that losing the group means the eventual loss of sanity. 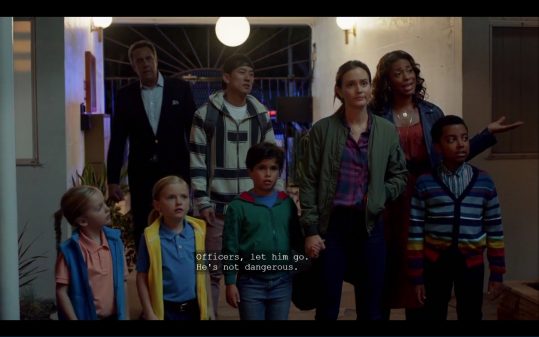 Kids are weird. Especially kids at the age of most of the parents. They haven’t fully developed things like shame yet so they are unequivocally themselves. As seen by Rory dressed up like he was going to someone’s wedding vs. going to school. Because he is a style icon. Yet, as funny as that is, you then get the flip side of watching these kids starting to develop fear and shame. Rory being worried about kids making fun of him and then there is Graham.

With Graham, Angie’s kid, he deals with separation anxiety in the beginning of the episode then transitions to his first crush. Something Will, despite him likely being abandoned, is for Graham being open and mushy about as Angie fears the worse. Probably because being mush got her beat to a pulp like a potato. Yet, Graham following Will’s advice got him the girl and they, disgustingly, swapped gum (excuse me while I gag and hopefully don’t vomit).

It Does Feel Like It Could Run Out Of Steam

The problem with network TV is and always will be that it runs good concepts into the ground by having them do 18+ episodes a season. Single Parents likely will follow suit. For as much as they could cover from dating, trying to co-parent, deal with inside and outside people influence your kid, as well as your kid being bullied, being a bully, maybe being diagnosed with a learning disability, and so much more, very few shows can keep that up over the course of 6 – 9 months. Even the half-hour shows like this.

Because, after a certain point, the audience builds up a tolerance. You get used to people’s personalities, their faults, what makes them weep, and while it doesn’t make you like them any less, it makes them repeating the same mistakes kill you feeling for them. For now, they are like that one friend who vents about their life all the time but keeps doing the same dumb s***. Which could easily turn Single Parents into a show which makes you feel like the person without kids in your group. Maybe a bit lonely since you can’t relate to some things but sure as hell glad you aren’t trapped in the ultimate committed relationship. Though I could imagine this show losing its luster, it starts off in a rather good place. It has a diverse group of adults and kids to identify with, each one contains both qualities you like and could get on your nerves, and you can see the route they could take. Be it them healing from a past relationship, dealing with the last one ending, being there for their kids more, if not protecting their kids from a world which may not readily accept them. In each scenario, we’ll likely find relatable moments that can make us cry, be glad that is over, or cause anxiety. Giving us a full range of emotions to anticipate.

Hence the positive label. From Douglas singing alongside Will, shocking his kids, to Angie fearing her child being rejected, even Miggy at that stage where he is adjusting to his first born, there is something for every parent and those who wish to become one. Now, whether it can keep up this energy once Douglas’ old school parenting and upbringing gets annoying? As well as many of each characters’ flaws come out? That’s hard to say. But I think, for at least two to three seasons, this show will probably remain something to see.