written by Amari May 20, 2019
1 comment
FacebookTwitterPinterestRedditEmail
Table Of Contents

It’s Bruno certainly has its moments, but without much in the way of character development, is it worth watching?

Malcolm, a Brooklyn native, thanks to some settlement money, spends his entire day being a dog father to his pet Bruno. A locally known pup who he takes everywhere, or at least tries to. Leading to one of the few arcs of the show which deals with Malcolm trying to make it so Bruno can go into a local supermarket. Especially since, the one time Malcolm leaves him outside, he nearly got stolen. Though, considering the thief targets more than just Bruno, and Bruno’s former owner appearing, finding a way for Bruno to enter a supermarket might be the least of Malcolm’s worries. 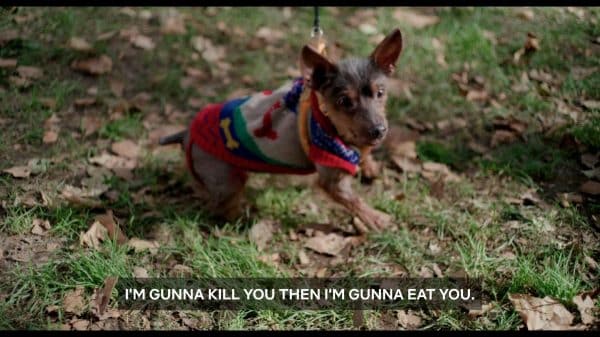 While there are occasionally funny moments on the show, like Malcolm beating people with sticks, the first real laugh out loud moment comes in episode 4 when a “Xolo” dog is going off. In the scene, Malcolm is in a dog park, and for some reason, this manic dog is given closed captions noting how he will kill Bruno, his owner, and while ultra-violent, it is also hilarious. Especially as Bruno’s face screams, “Help!”

While Malcolm does get a short romance with Lulu, a crazed dog kidnapper, it is Rosa who makes him feel joyous, scream his name, instead of Bruno’s, during sex, and lead you to believe he may reveal more of himself. For it isn’t like, when with Lulu, she asks much about him. So, outside of learning his family was against dogs, she doesn’t help us know who Malcolm is. With Rosa, however, she had the potential to help us uncover Malcolm and get to know him beyond being Bruno’s owner.

While There Is An Arc, Or Rather End Goal, There Isn’t Much In Regards To Story & Character Development 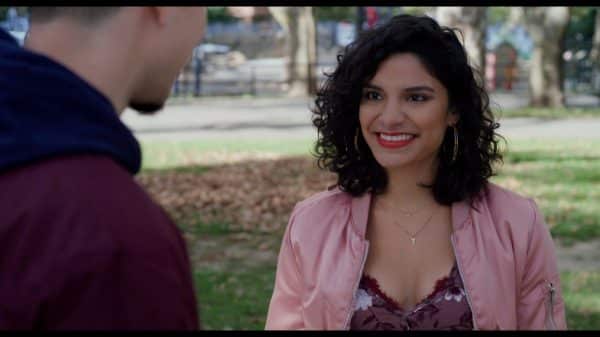 The season goal is Bruno getting into Cuban Tone’s supermarket. However, it isn’t like Malcolm spends each episode trying to find a way. Yeah, in “An Angie Is Born” he does copy Harvey, who is allowed to bring his dog in the store. However, outside of that, all we get are Lulu, or her family members, trying to steal Bruno, among other dogs, and random episodic content.

Then, in terms of character development, we get little tidbits about Malcolm, be it he lives off settlement money, his family not letting him have a dog, and things like that, but nothing beyond that. And even when it comes to the settlement money, it isn’t mentioned how he got that at all. Never mind, considering Malcolm mentions he grew up with his family, where they are and why we don’t meet a single member of his family – besides Bruno.

It’s Bruno is not going to appeal to everyone. The comedy, outside of two times we get a crazy dog, is kind of hit and miss. Then, even if you are familiar with certain urban elements, like stoop kids, you may not find yourself chuckling that much. Like most of Netflix more experimental shows, like Super Drags and BONDiNG, what’s delivered isn’t for everyone nor does it seem it was ever supposed to. If anything, It’s Bruno seemingly, considering creator Solvan Naim is working on Netflix’s hip-hop musical version of Romero & Juliet, was a test of his ability to deliver. Especially considering Queen Latifah and Will Smith, their production companies, not so much the actors, will be involved.

Leading to why the mixed label: It’s Bruno, like the other mentioned shows, seem a level above self-financed YouTube series, but not necessarily what you may consider buzzy Netflix shows. Pushing the idea Netflix is trying to build a bridge between up and comers with niche programming and their other productions they know will gain critical buzz and be a source of new subscribers. Making It’s Bruno more so about gaining content, and securing new talent, than a show which is a must see – whether you are a dog lover or not.

Too soon to tell.

I really enjoyed “It’s Bruno” the only thing I would enhance on in season 2 would be character development, other than that it is a fast fun, funny series about an attractive guy and his adorable dog living in New York and all the craziness and funny things they encounter on a daily basis. I definitely support this awesome series.