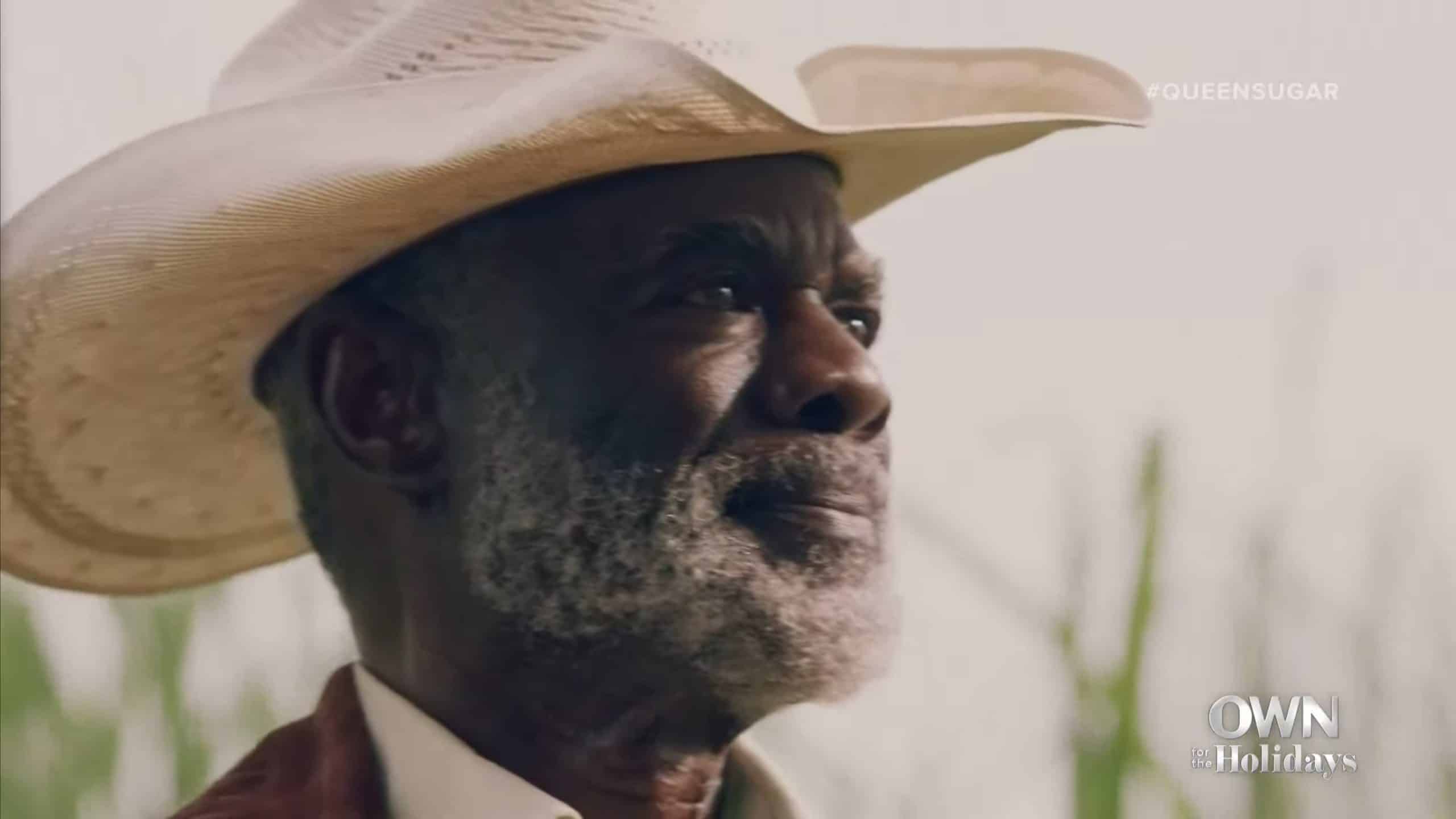 "Ernest after checking on his family, and seeing them do well," Queen Sugar, "For They Existed," directed by Ava DuVernay, 2022, (OWN)

The final season of “Queen Sugar” delivers in a way few long-running series have done.

For generations, the Landry family has found ways to undermine, exploit, and underestimate the Bordelon family and the Black farmers of St. Jo’s parish. But, with a new generation comes new ways of fighting back.

Thanks to creating a co-op, new protections are made, so losing land and money are less worrying as resources are pooled. Also, between Billie and Darla working the legal, business, and financial end, the farmers are given a fighting chance. Combine that with Ralph Angel’s leadership and Nova’s advocacy, it seems the tide may turn.

But the final season isn’t just about the long-standing war with the Landrys. It’s also about the future. What will Micah’s future be as a photographer? Aunt Vi and Hollywood have begun to look for new ways to serve the community or invest their time, from fostering, to Vi continuing to grow her business, to Hollywood getting more involved in the local education system. Nova? Her book is optioned for a movie, and she finds herself, once again, having to contend with the history and pain that the book brought. And then, when you add Prosper preparing for his next chapter with Sandy, marital issues, Blue’s father coming to town, and so much more? Season 7 doesn’t slow down, and even when at its end, it’s clear life will go on.

Our Rating: Positive (Watch This) – Recommended

While Bianca Lawson has been acting since the 80s, playing Darla in “Queen Sugar” feels like her breakout role. This feels especially true in season 7 as we get a cumulation of Darla’s journey. From having the ability to stand up to Aunt Vi and Nova, without fear of repercussions, standing in her power against Sam Landry, and even calling out Ralph Angel? Darla has multiple moments of confrontation that would be hard to imagine years ago.

Heck, even if you note meeting Blue’s father, Chase, or the work she does for the co-op, what is given to Darla is far beyond a supporting role. She isn’t just Blue’s mother or Ralph Angel’s little wife; she is a whole person who gets her well-deserved spotlight and leaves you hoping Lawson gets cast in something she deserves.

Seeing Many Familiar Faces, Or Putting A Name To A Face

Whether it is finally meeting Blue’s dad, Remy returning, Blue and Charley making an appearance, or even Ernest, season 7 is a walk down memory lane, mostly in the best way. Now, seeing Nova’s exes led to mixed results, but like seeing how far Darla has come as a person, meeting Nova’s exes shows how far she has come as a partner.

The Love In The Air

For most seasons, while the Bordelon family took Ls when it came to defending the farm, land, and the Black farmers, the love found through community and partners, was a salve. This season, we see love be less of a thing to compensate for how much hardship we see and something viewers can just enjoy. From Prosper finding love, Billie getting back all the relationships she lost, including her husband Vince, to even Parker reuniting with her mom, love is in the air.

Also, as expected, Hollywood and Aunt Vi remain couple goals, and watching Nova fall with someone who doesn’t ask her to make herself small, but challenges her, is wonderful to see. And while Darla and Ralph Angel butt heads, and she even goes to her mother’s after a fight, their love reaches new heights, and you further your appreciation for their journey.

How It Concludes Storylines

Note, everyone doesn’t get the ending you may expect or dream for them. Whether it is your darkest desires for Sam or maybe a perfect ending for each Bordelon, you don’t get it all. However, most are given the opportunity to end things in a way you can be satisfied with, and with a pseudo epilogue allowing you to peak into what’s next, you’ll be at peace.

Understanding That To Change A System, You Got To Work The System

Everyone has their place. There needs to be the Nova type making it clear the people plan to hold those in power accountable. However, you need those like Hollywood and Charley, who aren’t satisfied working outside the system and compensating for what the system doesn’t provide. In addition, you need those like Micah, who have learned the system, been burned by it, and who have the fortitude, network, and finances to create new machines.

The combination of those holding the indestructible systems to the fire, joining and changing things from the inside, and people like Micah preventing new systems from mimicking the established are what allows for the future “Queen Sugar” has shown as possible when a community comes together and supports its own.

All The Teases Of Better People For Nova Than Calvin

While we don’t see all of Nova’s exes, we meet her first queer love in Camille, watch her evolve as a partner with Dominic, and Calvin returns. Now, considering her saga with Calvin, we could have done without him. Between her love for a Black man who has been a notable part of her emotional growth to seeing the one who got away, Calvin seemed unnecessary. But I guess there are enough fans of Calvin behind the scenes to allow him to be a contender for Nova’s heart – sadly.

Keke and Micah compete with Hollywood and Aunt Vi as one of the best OG couples on “Queen Sugar.” Keke is a smart, cultured, beautiful Black girl who ushered Micah into St. Jo’s culture and was his first love. This is acknowledged as they reconcile this season, but whether or not they will pick up where they left off, or the timing is just not where both need it to be, we’re left unsure what becomes of these two, relationship-wise.

Sidestepping Micah’s Ability To Draw Queer People Into His Life

During the course of “Queen Sugar,” Micah’s actor, Nicholas Ashe came out, and it seems since then, there has been a tease Micah could be bi. He finds people who seem queer drawn to him and being drawn in queer spaces. Yet, the show sidesteps the possibility and presents what seems like a storyline that constantly lost the support it needed to be played out.

Queen Sugar: Season 7 – Summary/ Review (with Spoilers)
Overall
“Queen Sugar” ends in the kind of way I would submit most Black majority shows don’t have the privilege to. It ends on its own terms, getting to conclude most, if not all, storylines, and leaves you not only satisfied but feeling that your loyalty for all these years has been rewarded.
Community Rating0 Votes
0
Highlights
Understanding That To Change A System, You Got To Work The System
How It Concludes Storylines
The Love In The Air
Seeing Many Familiar Faces, Or Putting A Name To A Face
Darla's Standing Up To People She Likely Wouldn't Have Before
Disputable
Sidestepping Micah's Ability To Draw Queer People Into His Life
Keke and Micah Not Ending In A Way Where There Was A Confirmation
All The Teases Of Better People For Nova Than Calvin
86
Subscribe to our mailing list