Wherever I Look
Recaps, Reviews, and So Much More
Home TV Series Ozark: Season 2/ Episode 7 “One Way Out” – Recap/ Review (with Spoilers)
TV Series

Between Ruth having a breakdown and Wendy’s conversation with Mason – this might be the high point of the season and series.

Table of Contents show
1 I Just Want To Be Useful: Ruth, Cade
1.1 Commentary
2 I Was Spiraling Long Before Marty: Wendy, Mason, Charles, Marty
2.1 Commentary
3 We Are All Broken: Mason, Marty, Wendy
3.1 Commentary
4 Question(s) Left Unanswered
5 Collected Quote(s) & .Gifs
6 Highlights
7 Low Points
8 On The Fence
9 Follow Wherever I Look on Twitter, Like us on Facebook and Subscribe to the YouTube Channel.
9.1 Ozark - Episode List Find Ozark Exclusively on Netflix Collected Quotes From The Show
9.2 Ozark - Episode List
9.3 Check Out Other TV Recaps

I Just Want To Be Useful: Ruth, Cade

With Marty showing how little Ruth and her goals mean in the last episode, it seems whatever her job was for Marty is put aside for the family business. Perhaps as a last ditch effort to make sure Wyatt and Three get to stay clean. But also, with Marty tossing her aside, him letting her go through all that torture, it broke their dynamic. Now Ruth needs her dad to step in. Validate her and tell her how well she is doing. Which is hard.

Primarily because, it isn’t that she forgot how to do what she has been doing all her life. It’s just, stealing boat parts and things like that? It means dealing with water. Which, in a way, seemingly is a trigger now for Ruth and brings up that trauma. Add in she messes up stealing a part work 10 grand and she has a full-on breakdown. One which, oddly enough, Cade says the right thing. Leading to Ruth revealing the funeral home likely has Marty’s money. 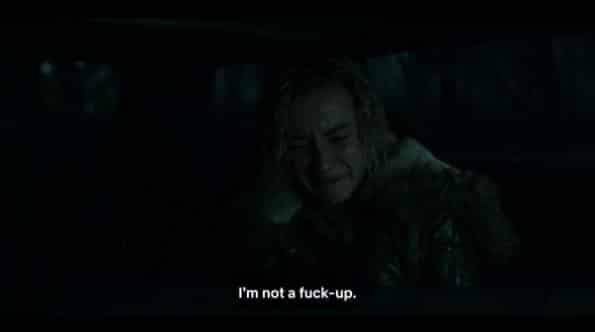 I cried. I didn’t think this show could go that far, but I cried. For, sans Charlotte, the women of this show aren’t really given the option to fail. If not death, it is incarceration, if not those two things, it means being maimed or tortured. All for the sake of family more than themselves really. But the main difference between everyone else and Ruth is that she doesn’t have the same kind of backing in case something does happen. If Helen fails, she will always be a lawyer and such talent could be used for another client or firm. If Darlene fails, she may lose a farm, could lose Jacob, but she’ll still have the land. If Wendy fails, she has her political background, perhaps Charles, and could easily gain more allies.

All of the women, as in full-grown women, they have a lot to lose but a lot of tools in their arsenal to keep them from losing. Ruth? What does she got besides her wits and tough demeanor? A dad who would use her for blackmail material to get money? Perhaps is taking advantage of her now knowing she’d do anything to keep Wyatt from getting into trouble. And speaking of Wyatt, thanks to Charlotte, and life in general, he went from the one who could make it, someone worth protecting, to a feign hope. All the while Three just exists.

And it is with that you have to find yourself crying. Ruth didn’t plan for a life without Marty backing her. Yet, thanks to Helen and the cartel, Marty’s people, she can’t even go back to what she used to do and be as good as she once was. She is forever changed and with her talking about robbing Marty, it is now like she is in a loop. If not, better said, walking back all of the progress she made in life and is back to desperation. Going from one job to another hoping the money last long enough to not need to do another job anytime soon.

Which would be hard for any adult to deal with, thinking you are going backwards, but when that first time hits you so young?

I Was Spiraling Long Before Marty: Wendy, Mason, Charles, Marty

Mason kidnaps Wendy in hopes that threatening her means getting his son back. Which Marty does, with Charles’ help, but before he shows up there are a lot of conversations about faith. Some of the highlights are in the collected quotes below but one of the big things to take away here is how people lose faith. Take Wendy, who goes deep into her life history.

She notes it was true, her dad did build a church but then he would reach for a bottle. A problem which might be generational, in terms of vices to not deal with things, for Wendy too was fond of the drink. Well, on top of drugs and sex. I’m talking multiple abortions by the time she was 17 but, she still went to church out of hope, more so than faith, of being cleansed in some way. Yet, with one confession, being looked at differently by a priest, she walked away.

Now, during this story, you could be led to believe Wendy is simply manipulating Mason since he clearly is dealing with his faith being tested. Especially as she notes he walked into that convenience store not because of God, but because he wanted to die and just so happened to see God on his way. It’s a whole lot of back and forth which even includes an interesting line about how Wendy sees the whole Adam and Eve thing. Thus pushing what surely will be Netflix’s FYC (For Your Consideration) scene(s) when it comes to Laura Linney during the award season. 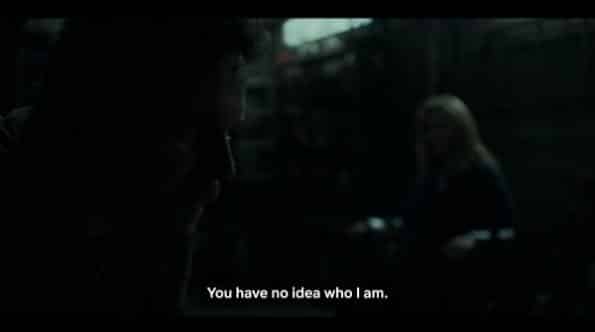 Wendy: You have no idea who I am.

Though not religious myself, it is something interesting to hear people discuss. For with it perhaps being the real last taboo subject, in terms of something not every and any show is willing to touch on, it makes real conversations about it all the more interesting. Not to put down shows like Greenleaf, or God Friended Me, but while those shows present complications of faith, it is for the sake of drama. Wendy and Mason’s conversation is more so a real deal talk about how one loses faith and strays from God.

That is, whether they are someone like Mason, who once felt touched by their grace or someone like Wendy who once searched for God since their forgiveness was necessary to stay alive. If not, at the very least, strive for goodness despite the path being dark, narrow, and seedy. Which isn’t something you hear of a lot. For while it is safe to assume the majority of characters in American media are some form of Christians, they don’t talk about it much. Well, unless something bad is happening of course. Then they grovel, beg, and barter.

But, I’d like to add in a further connection to Ruth, since I’d like to think I’m rather good at that. Hearing all Wendy did as a young person makes her scene with Ruth in season 1, which I can’t pinpoint the episode, mean so much more. For Ruth is 19 or so facing decisions that Wendy was barely able to handle at 17. With her only having to worry about herself. So it makes it kind of unfortunate those two didn’t grow closer this season. Wendy could have filled the void her mother left. Much less, unlike Marty, drummed up some loyalty.

We Are All Broken: Mason, Marty, Wendy

After a long conversation on faith, among other things, Marty shows up with Ezekiel and the trade was supposed to happen. Problem is, since Mason has the trade at his home, he realizes now he has to come up with a way to keep Zeke because he did something bad. So, the first idea is to keep Wendy since Mason sees Marty as the devil which makes Wendy a bad person. However, with a screwdriver to the gut, it seems Mason didn’t listen to the fact she was a bad girl before Marty came around. Yet, like when Wendy tried to run and only hit Mason on the head once, she doesn’t make sure she really got him good before trying to run.

However, Marty does grab Mason’s gun and tries to free Wendy. Problem is, with him losing faith, Mason is right back to where he was at that convenience store and seems fine with dying. Which, by accident, Marty delivers that wish and falls apart not soon after. Thus giving Wendy what she has long wanted. Marty being open and emotional with her.

But, that’s short-lived for as Helen begins a PR campaign for the casino to be approved, featuring Marty’s family, it seems he has shut down and began tuning out the world. This is going to be a big change for Marty. All this time the only thing dirty about him was the money he washed but now he has a murder on his conscious. One of a man he tried to help, but also ruined the life of. Yet, he kind of had to die. Wendy basically told him enough to get a plea deal and help Roy immensely. Which does push the idea of whether she planned all this.

For let’s be real, Wendy isn’t an idiot and while not on the level of Darlene, she is somewhere between Darlene and Helen. The only difference is Wendy speaks more kindly when she deals with people and has better social skills. Yet, with the way she talked to Mason making it sound like she was trying to strip him of his faith, considering she could have stabbed him in the neck but instead went for the gut, it does make you wonder if this was to be her insurance policy.

What I mean by that is, the main thing keeping Wendy and Marty together is all the crap they are in. So, bring a murder into it and they are truly bonded for life. Since that takes them beyond dirty money and the cartel, or Snells, killing people. Perhaps taking note of Darlene and Jacob’s relationship, she set Marty up so this secret bonds them in ways even having kids wouldn’t. But this is just me thinking all the women, sans Charlotte, are complicated characters who have a multitude of layers to them.

I think you’re confused, and lost, but that’s only natural when you get lied to so many times.
— Wendy

That’s the thing that no one tells you about evil. They make it seem like there are two clearly marked paths with flashing signs pointing out each way: sin, redemption. […] But the truth is, evil comes when the righteous path is so hidden, it just looks like there’s only one way out.
— Wendy

When you think you’re going down, you grab hold of whatever’s closest. Guns, drugs. God.
— Wendy