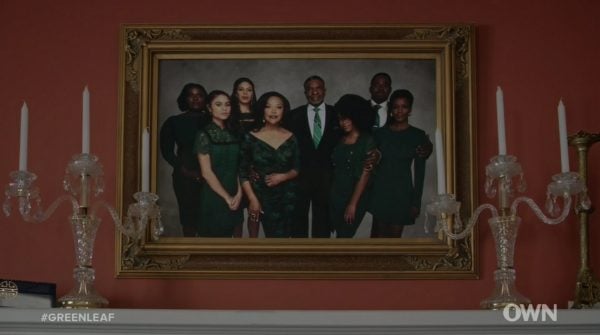 Greenleaf returns and with Mae and James’ relationship on the rocks, the foundation of the family is splintered and puts all on unsteady ground.

Kevin is back and he is really serious about that custody thing. I’m talking to the point of shutting down Charity’s burgeoning career with the threat of bringing up kidnapping charges – if Nathan crosses state lines. A threat she takes seriously because she tells Jabari she is dropping out of the tour. For she rather jeopardize her career, and deal with breaking a contract, than let Kevin see, much less take care of Nathan.

But Charity isn’t alone with having issues because of their child. Zora is found in some roach motel and Jacob is heated. He takes away all her gadgets, her bank card, and pretty much has her on lockdown. Problem is, with trying to control Zora in such a way, it only coerces her to further down the path she is on. A fear Kerissa has so she talks about getting Zora counseling. However, with Zora stealing money from the collection bucket, who knows what can really be done at this point?

I think there is a serious need to ask what will be rock bottom for Zora? Her official, come to Jesus moment? Will she need to end up in the hospital, pregnant, if not both, for her to act right? Because stealing from the collection bucket seems like a new low in a way. Especially since we don’t know what she is planning to do with said money? Is it for the next time she plans to run away, maybe for some weed to deal with all of this?

What also has to be considered is she seems to still care about her father’s opinion of her, but could that have been an act for Kerissa to make it seem she isn’t on the wrong path? Just simple in the troughs of love and drowning? It is really hard to say with Zora since things in her life have only really gotten worse season by season and I don’t foresee that changing without a serious reality check. One that Jacob, nor Kerissa, can protect her from.

As for the Kevin situation? That is going to be messy. Between him disappearing, then popping back up with Aaron backing him to Charity having to shut down her ability to work, outside the church, because of a kidnapping threat? Oh, Kevin won’t know what hit him. Lady Mae needs a project, an outlet, for all this pent-up anger she can’t be open about because of appearances. And you know she homophobic right? This may have been just the something she needed to take her mind off James and the IRS.

Oh yeah, the IRS are back and it seems all Mae’s brother did was just pay someone off. But that person is gone now and the IRS wants $2 million in 90 days or else all hell will break loose. And this couldn’t have come at a worse time since Lady Mae still is in no mood to forgive James and James is basically flirting with the devil in Rochelle. Someone who is trying to set him up but he keeps reminding her that he is married. If not reminding himself he is married. It isn’t 100% clear which it may be.

All that we know is that the Bishop is aware of her advances and also aware she is a financial donor he doesn’t want to alienate. But, with Grace knowing the truth, and spreading it to her siblings, so comes the question of who should do what? Well, Grace thinks Jacob should talk to Mae, since they are close, and Charity joins Mae’s opinion of thinking this is Grace’s fault so she should fix it.

Which pushes Grace to turn to Darius who wants to be supportive, but the problem is that he doesn’t know how he can. He doesn’t pray or go to church, and isn’t willing to budge on that. So all he can really do is listen but it isn’t clear if that will be enough. For church and family are the top things in Grace’s life and Darius hasn’t really integrated much with either.

So is the sum of Rochelle’s plan to sleep with James, make a big deal of the affair, get pregnant if she has to, and use that to ruin the Greenleaf name? While not a bad plan, can we also note how basic it seems? Especially considering how much her financial knowledge is touted. I’m sure looking at the church’s books could cause more controversy than the Bishop steppin gout on his marriage. For, last I checked, it wasn’t just about ruining James but all he built as well, right? Expose them to be megachurch owning people who live lavishly while people suffer would hit the whole family. Combine that with what Tasha seems to be doing and that would be the knock out punch. But I guess making Rochelle a ho who doesn’t mix her bread and butter with revenge is the game here.

One which I can’t wait to see how Grace is supposed to handle. For with it being clear Jacob still has beef with how his dad treated his affair, I’m sure he may relish in his father being shamed like Basie Skanks and his family will. But as for Grace? Well, maybe she can get Darius to help? Dig up some dirt to make Rochelle wanna go away right?

But Then You Pick It Back Up: Tasha, Lady Mae, Bishop James, Britney, Jacob, Kerissa

You remember Britney right? Triumph’s treasurer who never really supported Jacob’s grandeur plans? Well, she gets fired. To make a long story short, Tasha plants a seed in Jacob’s mind that Britney needs to be fired because of her attitude – for she didn’t talk to Basie the way she does to Jacob. Which has been an ongoing problem. One that began around episode 14 of the last season and comes to a head with her talking about Jacob bankrupting the church and all that.

So, with him now trying to embarrass him in front of his wife? She gets cut. Jacob feels she isn’t coming with solutions, just problems, and has no faith in what he is trying to do. Thus giving Tasha one minor win but the big one comes from Lady Mae. Someone who doesn’t want to fake it around James’ church so she decides to take a Sunday off. Which is far too strange so she sneaks into Triumph – where Tasha spots her and sees if she can be 2 for 2. And she does.

Using a ridiculous story, which she should of stopped while she was ahead, she scares Lady Mae right back into Bishop’s arms. Well, maybe not his arms but she seems at least willing to call a truce. She is still quite upset but will let him in the house and commit to appearances.

One of the things you have to love about Greenleaf is the church shade and southern way of noting how someone is full of it but with a smile. For whether it was Grace attempting to cover for Mae or the way Corinne was acting? I got my life and the spirit.

Jokes aside, this is going to be a tumultuous season. Lady Mae looks and feels trapped and without a means to let go, it is going to be interesting to see her lash out. Especially since it is Lynn Whitfield. Watching her boil and explode is not only entertaining, but is her bread and butter. She has made a career out of characters like this and with Patti LaBelle being added to the mix soon? HA HA! James ain’t going to know what hit him. No matter which way he turns.

There is a thin line between keeping up appearances and flat-out hypocrisy.
— Lady Mae