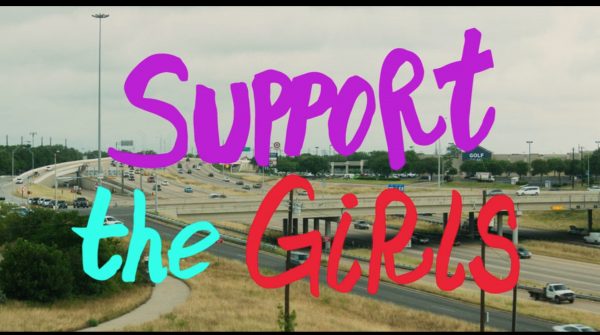 Support The Girls is a tad strange, and lacks any real story, but Haley Lu Richardson and Shayna McHayle make it worth watching till the end.

Double Whammie is basically a bar about young girls in skimpy clothing, breasts out and daisy dukes. However, with Lisa running the place, as much as it may seem like your general trashy place, she tries to make it family acceptable. The girls can’t be too flirty, Lisa will call the cops if someone gets handsy or rude, and she keeps a tight ship. But, she isn’t a hard ass. Like when one of the girls, Shaina, needs money for a lawyer, she has an unsanctioned car wash to raise money. Even gets a few new hires to help.

Problem is with that, the boss, Cubby, who seemingly has wanted to fire Lisa for a while, he doesn’t appreciate that. Making it seem like the final straw. However, with girls like Maci and Danyelle next in line for seniority, who only really like working at Double Whammie because of Lisa? Well, so comes the question if Cubby really has it in him to lose the best he got over one car wash to help an employee?

I can take fucking up all day but I can’t take not trying.
— Lisa

It isn’t clear why Maci is as upbeat and eccentric as she is, but her comical nature mixed with Danyelle bringing you around the way girl realness drives the movie. This is even with Maci not having much going on besides dating some old man and Danyelle’s storyline pretty much being a mother, one of Lisa’s friends, and who Cubby first turns to when he wants Lisa gone.

Yet, despite not really having a storyline, you come to love these two zany people who seem like they are straight from an NBC show.

The only person who really has a storyline is Regina Hall’s character Lisa. She runs the Double Whammie, seemingly is in a marriage which is slowly dying, and isn’t necessarily a maternal figure to the girls but at the very least the best boss they ever had. Yet, none of these storylines are made strong enough to compensate for this movie pretty much relying on two characters’ personalities – and one of the two are not Lisa.

For in Support The Girls, Hall is toned down from her usually exuberant personality. She plays a serious actress, for a lack of a better phrase, and while you get she is trying to show a different side to herself, it just seems like the wrong time to do that. If not the wrong movie for her to stretch her abilities.

The main problem with Support The Girls is it doesn’t have a compelling storyline. Lisa at risk of being fired, Shaina dealing with a bad boyfriend, or the zany twosome of Danyelle and Maci aren’t enough. For while Danyelle and Maci are comical, you are seriously left wondering where is this going? Is this film trying to say something? What is going on here?

And the answer is: Nope. Lisa doesn’t try to fix her marriage, open her own bar or none of that. This movie presents the case of bad things happening to good people and thus those good people move on. No bells or whistles, monologues or tantrums. Stuff happens in life and that’s it.

Hence the mixed label. For while you have to appreciate how real that is, at the very least Lisa could have worked things out with her husband. Ending things with her having a cathartic scream just felt anti-climatic.