While My Brilliant Friend overloads you with character introductions, the leads keep a tight enough grip for you to not end up lost.

At the age of 60, with her friend wandering off, onto a new adventure without telling anyone, Elena decides to write her friend’s life story. One in which she isn’t going to just give her take, but use everything her friend ever told her. Why? Well, perhaps to be petty – it isn’t 100% clear. All that we know for sure is that Lila has always been bold, brash, and content with doing things alone. It’s what Elena loved and feared about her. Also, it was what drew her to Lila when they were in elementary school.

That is the time period most of the episode takes place, in their part of Italy. Specifically their building community and school where Elena was once the star pupil until Lila revealed this was false. Thus causing a bit of an unspoken rivalry until their instructor has a friendly competition between her top students and the top students of the boy’s class. Leading to Elena seeing, more and more, how difficult life is for Lila. Some of which is her own fault, especially because she has no issues picking on boys, but a lot of it isn’t.

To say the least, Lila is strong-willed, smart, and everything which makes it seem she is a girl born in the wrong time. Yet, despite feeling isolated, and boys like Stefano smacking her about, she continues to stand tall, is infinitely curious, and likely the one who you’ll clamor for the most. 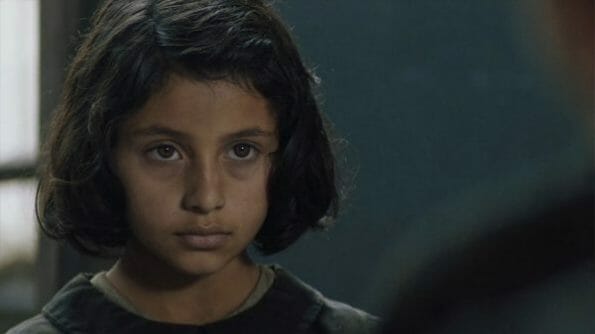 As noted below, it wouldn’t be that difficult to feel overwhelmed by the sheer number of character on this show. Even to the point of feeling Lila and Elena get lost in the mix. However, while Elena is a bit tame, and perhaps solely memorable because she is the one telling the story, Lila is a force to be reckoned with. Bringing about your usual Trojan Horse where a pale-skinned character is but a segue for a darker skinned force of nature.

Not to imply Lila is a wild child who has no decorum. What makes Lila the most interesting is this balance of her being intelligent in multiple areas. Academically, as shown by her teaching herself to read and write, as the show’s title notes, she is brilliant. However, there is also an emotional intelligence of sorts as well. Take note the competition mentioned in the introduction. With Lila knowing the kind of man Alfonso’s father, Don Achille, is, she knows outwitting him publicly isn’t smart.

Yet, she isn’t perfect. While that situation she knew when to pick her battles, then there is when she decides to throw rocks at boys, taunt one boy wearing a dunce sign, and curse at Alfonso’s older brother Stefano. Also, she tests Elena in ways which surely can’t be seen as friendly. Sometimes it is in small ways like not thanking her for coming to her aid and other times it is throwing her doll into a basement.

To say Lila isn’t as perplexing as much as she is the strongest draw of the show would be an understatement. Though, considering the show is titled My Brilliant Friend, would you expect anything less from the person this whole thing is supposed to be about?

Name Overload/ Welcome To The Neighborhood 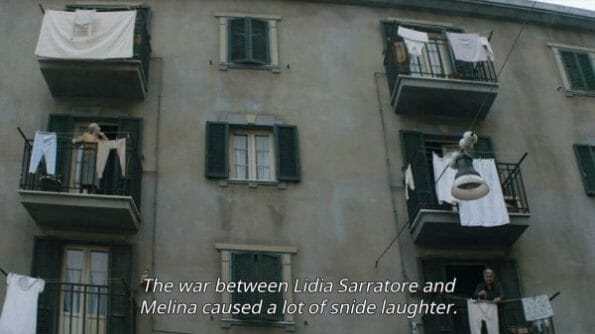 The war between Lidia Sarratore and Melina cause a lot of snide laughter.

Outside of our leads, we get left with so many names it is hard to know who to keep in mind for future episodes and who isn’t worth noting. Some, like Nino, Elena’s crush, you feel need to be kept in mind. Especially since he proclaims she will be his wife – before his father is forced to move. Then, of course, there is the need to note Alfonso and Stefano since they are Don Achille’s children and thus likely will be figures that haunt Lila and Elena’s days.

Yet, as for the rest? Be it the wailing widow, Nino’s parents, some of the other girls in Elena and Lila’s class, and some of the boys who get their names said? It’s hard to say who could or may matter since the show really presents an entire community. Maybe not every woman who is watching the latest drama out their window, or man trying to dodge pots and pans being thrown out a window, but enough for you to feel the show wants it clear even small roles matter for they had influence. Even if just because they didn’t stop what was going on.

First Impression: Positive (Watch This) | Get The Book on Amazon

I truly think the only issue which could come from this limited series is Elena trying to push herself too much to the forefront. Not to imply she is the most boring character in existence, but she is at her best when she is our eyes, ears, and is presenting her memory. Anything beyond that may lead the show to falter for Lila is made into such demanding presence that to take away attention from her would be strange. Similar to this one scene when Don Achille pulls a man out of church and yet everyone still focuses on what the father of the church is doing.

Leading to why the positive label, while Lila deserves a large part of the pie, it is also Elena filling up their world so we can fully understand what she and Lila went through. Not just as girls, but people, and how, despite it all, they made it out alive. Now, as for whether they were happy, felt fulfilled, and things of that nature? We’ll have to wait and see.