Lucifer: Season 4, Episode 7 “Devil Is As Devil Does” – Recap, Review (with Spoilers) 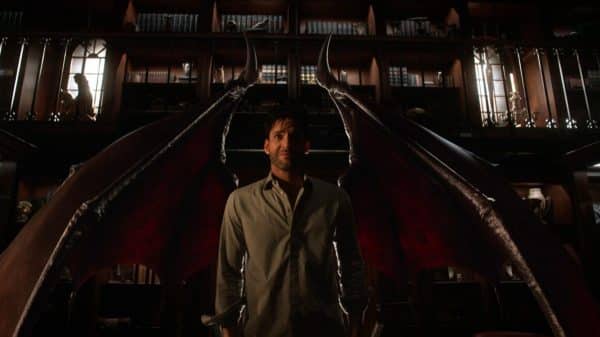 As Lucifer reverts back to the devil he once was, Amenadiel is forced to face Remy to protect his child. Also, Dan decides to get petty, and Maze develops a crush.

After watching, maybe even taking part, in Lucifer punishing the perpetrator of the last case, it’s like a new kink for Eve. It’s all she wants to do and figures Lucifer took the job consulting for the LAPD so he could easily find the worst. But, with this being a new kink, it means Eve wants to be there for the punishment and the finding of the bad guy – meaning she wants to go to work with Lucifer.

As you can imagine, Chloe isn’t much for this idea, and so she pushes back on it. However, with Lucifer threatening to go rogue, and her knowing what that could mean, she lets Eve join. Though she remains suspicious of her throughout.

It comes to the point where Remy is sick of Amenadiel stalling and trying to talk her out of taking Linda’s child so they fight. A battle which Amenadiel wins and that leads to Remy leaving. But, while Remy leaves without disturbing Linda, Maze, on the other hand, refuses to give her space. Making it so Linda pushes Maze to, kindly, get a life. Mind you, while maintaining she has a family, but promoting Maze to not just focus on her and the child.

Eve and Chloe compete for influence over Lucifer, and as that happens, it becomes clear Lucifer and Maze’s stories are mirroring one another. At least in terms of he, like her, being attracted to who accepts them now, with rose-colored glasses, than really evaluating the relationship at hand. For when it comes to Linda, as noted, Maze is a welcomed presence but is violating her space a bit.

On the flip side, Eve is a welcoming presence, but is violating Lucifer’s space, but with him not having who he wants, he’s fine taking what he can get. Problem is, according to Chloe’s conversation with Father Kinley, this is likely the root to the prophecy and considering how terrible Eve’s influence is, she likely will bring about untold evil. Especially since, on top of loving Lucifer, she is also enabling the worst side of him.

However, as with anything, when the high comes down you reflect on what you did. And with Chloe holding Lucifer accountable, he realizes he may have gone too far. Pair this with checking his wings and noticing they are satanic, and it makes him fear what he has done.

Has Lucifer Reached A Point Of No Return?

While Lucifer has had lapses that caused him to go to a dark place, with Eve by his side, does this mean he is going to go to a point where he may actually unleash hell upon humanity? Much less, will it be possible that he could go so far down the rabbit hole that he finds fault in the humans he knows and maybe think they should be judged to? After all, it isn’t clear at what point someone would go to heaven versus going to hell. So of the cast we know, could they end up on Lucifer’s list? Particularly if they try to say a critical word about Eve?

And I recognize he is in fear of his wings, and notes he went too far, but there is a need to wonder if he only physically changes or if he mentally and emotionally shifts as well? Since it is a voice in Lucifer’s head which pushes him to punish and who is to say with Eve aiding it if he may take things to the next level?

The more we see Maze crave a connection, the more you need to wonder if she may confront Lilith over her upbringing and maybe try to heal old wounds? Taking note of there not being any news, or names on IMDB, noting a Lilith, it seems the answer is no. Yet, with this being an international hit, clearly more than a domestic one, there could be a 5th season which makes her a villain right? If not an arcing character who Maze goes to battle with.

While the cases are only connected by father and son, and are for different crimes, it’s nice to see a case which isn’t one and done, and everyone moves on. It makes me wish more cases are like that since with them being handled so quickly, it makes it seem the victims and perpetrators aren’t real. That they just pop up on command to flesh out whatever they are needed for to advance Lucifer’s story. Thus making them barely worth noting and making the actors, and their characters, forgettable.

Got To See Trixie Again

Why is Trixie barely in this season? I get the time would be better spent developing Dan or Ella, but since that’s not happening why not bring Trixie around more? For example, I’m sure she is curious as to who is making her mommy unhappy, never mind why her daddy is mad all the time. Much less, questioning where Maze is rather than babysitting her? All of which isn’t spoken about this episode, but at least the kid makes a little appearance and gets to bother Lucifer and Eve. Also puts herself in harms way but, what else is new?

*Makes vomit sounds* Seriously? Let’s not do the whole, “We have no idea what to do with these two characters so let’s pair them up.” Ella deserves better and Dan, honestly, he needs to just be single.

Got To See Trixie Again - 8

Has Lucifer Reached A Point Of No Return? - 9

While Dan and Ella are showing they aren’t invested in, at the very least Trixie makes an appearance, we got guest stars who extend multiple episodes, and Maze’s mommy issues make Lilith appearing seemingly inevitable. As for Lucifer? There is the question if he has as much control over his actions as we often assume and whether he can go back to how he once was or if this is the beginning of the end. A quite curious thing to look forward to.