Five Points finds itself becoming an alternative to 13 Reasons Why as it approaches teen depression and thoughts of suicide with a bit more caution.

Table of Contents show
1 No Backup Plan: Paul, Eric
1.1 Commentary
2 Wallace Has A Gun: Alex, Wallace, Eric
2.1 Commentary
3 Lean on Me: Lexi, Eric, Tosh, Ananda
3.1 Commentary
4 Highlights
5 Follow Wherever I Look on Twitter, Like us on Facebook and Subscribe to the YouTube Channel.
5.1 Previous Episode’s Recap
5.2 Check Out Other TV Recaps

While Eric isn’t as poor as Tosh makes him out to be, Eric’s father Paul is someone who works a blue-collar position. One which seemingly is for the city or state and can afford them a modest house. Yet, because Paul seemingly wants to live vicariously through his son, since the boy was 8 he has molded him to be a football player. To the point that Eric doesn’t know anything else and has invested his whole sense of self into that. Making the possibility of college rejection devastating. 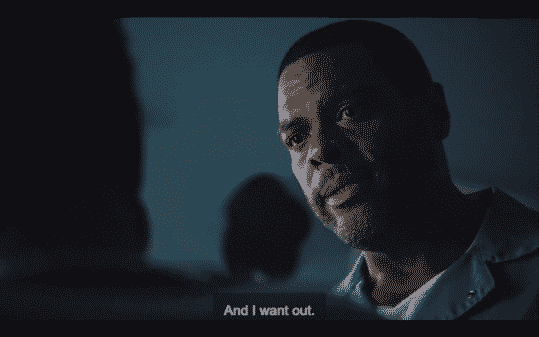 Paul (Troy Winbush): And I want out.

I love how, increasingly, on multiple platforms, there is an exhibition of how stressful this idea is that, if you don’t make it into college, your life is over. We saw it in Candy Jar, in The Swap a little bit, and now in Five Points. But also you have to take note of the elitism in the whole idea.

Take Tosh saying that Eric would end up poor like Paul. The concept of poor here is very strange. For while we don’t know Paul’s exact position, it seems to be enough for him to afford a house which at least has two bedrooms in it. Plus, if he works for the city, state or county, his benefits are probably top notch and he is likely a member of a union. Meaning, unlike most of us, he’ll get raises each year.

Which, compared to a football player’s salary, I get it. It doesn’t compare. However, taking note Eric didn’t see working in the same job as his dad a bad thing, there comes the other issue at hand. Not just pressure on yourself to do more and be better, but the weight of your parent expecting that and, in the case of Paul, him seemingly wanting to live off his son.

Making you kind of understand why Eric broke up with Tosh. He probably knew things weren’t going to go right so better he broke up with her, considering the venom she spits, versus her doing it after he confirmed he wasn’t getting into any college.

With Wallace scaring off Alex with Tosh’s father’s gun, he feels kind of empowered. However, all this does is piss Alex off further and as for why he even picks on Wallace in the first place? Well, he doesn’t give any real reason to Eric. Making it seem the possibility of a crush he doesn’t know how to deal with still being the answer.

As for the gun? It, unfortunately, switches hands from Wallace to Eric who realizes it is Tosh’s dad’s gun. However, he doesn’t necessarily get the chance to investigate how it went from a locked cabinet to Wallace’s hand. One of the things that many a gun rights activist may say is that they feel the need to have a gun because it makes them feel safe. Well, unfortunately, the same doesn’t just apply to adults but teens and kids as well. Which made the fact Wallace handed the gun over to Eric strange. You know that is the one thing keeping Alex from bullying you yet you handed it over to Eric? Granted, Eric said he’d talk to Alex but you just made it seem like that wouldn’t change anything. So what gives? Just a convenient move for the sake of the plot?

Despite Tosh and Lexi’s beef, it seems Eric is a bit more friendlier with her. Not to the point of calling them friends but they do have casual conversations. Something which could have helped if only Lexi got to Eric’s car sooner.

But let’s back things up real quick. Eric tries to talk to Tosh who, with her still in her feelings, she decimates and kicks Eric while he is down. All the while, Tosh’s friend Ananda makes it seem like something is going on between her and Eric. What exactly? Who knows, but her talking in whispers makes it seem that either they have a friendship outside of Tosh or something else going on. Perhaps not reciprocated because of Tosh though.

Either way, after Tosh goes off on him and he gets yet another rejection letter, Eric writes a suicide note as Lexi walks by. And, because Lexi is that type of girl, she decides to jump in Eric’s car, try to talk to him, and eventually wrestle for the gun which Eric blows off in the direction of his temple. I really want to know what was, maybe is if the gun didn’t kill Eric, happening between Ananda and Eric. Just because one of Tosh’s minions seemingly having some kind of secret shared raised a bit of an eyebrow. That aside, let’s talk about what might be Eric’s final moments. I love the fact Lexi not only didn’t mind her business but jumped in the car and tried multiple ways to get Eric to talk.

First just by asking for a ride which could have given him an out and an opportunity to get out. She then took note of the surroundings and tried talking to him again. Then, recognizing how he was looking, and the gun, and the note, tried to get that gun away from him. Now, I’m not a psychologist or a “professional” in that field. However, in comparison to 13 Reasons Why which can be quite brutal and triggering when it comes to depression and suicidal thoughts, you have to appreciate Five Points way of harnessing the seriousness of the situation.

Now, this isn’t to say it is better or worse than 13 Reasons Why. More so it is good that teen mental health is on display from multiple points of view. Alongside the stressors which cause people to have anxiety, depression, and suicidal thoughts. Because, far too often, what teens go through gets downplayed and fingers get pointed everywhere but those who had an active role in them feeling the way they did. For having blood on your hands is rather hard to deal with.

I agree that Tosh seems a likely candidate for a breakdown. She is working at being ‘perfect’ to please her mother.

Yes, that food situation for Tosh is weird. She may be shown to have an eating disorder.

Thinking about it, it still seems weird Wallace gave it away for if it scared off Alex once, it could maybe do so again. Plus, a lot of prop guns have it where, when you pull the trigger, it makes a loud pop noise and blows out smoke. That could buy Wallace time the next time he saw Alex.

Also, I too enjoy the fact they make mental health issues a everybody thing and not just outcast, nerds, and people like that. For even Tosh seems like she is on the very of an anxiety attack sometimes. Not to forget, while she eats, does she eat enough to support herself?

Remember Wallace thinks the gun is a prop gun tossed in the trash by the school’s drama department based on the discussion in the last episode at the trash bin. So he gives the gun to Eric because it is useless – not a real gun and was only used to scare off Alex from bullying him.

Eric recognized the gun as the one shown to him by Tosh’s father and tried to tell Tosh. But she was in her feelings and did not let him talk.

I am so mad at Eric’s father for pressuring him to be a football star especially after Eric had what sounds like a severe concussion. The father wants Eric to live the life that he failed to achieve in his own football glory days.

Actually, I appreciate Five Points showing that jocks like Eric also suffer from depression not only nerds like Wallace who is being bullied or Lexi who is an outsider.

They cover a lot of socially relevant topics in these very short episodes.