Volume III, or Season 3, of Dear White People presented a noticeable, but not necessarily drastic, shift from its previous seasons. Here are some of the highs and lows. 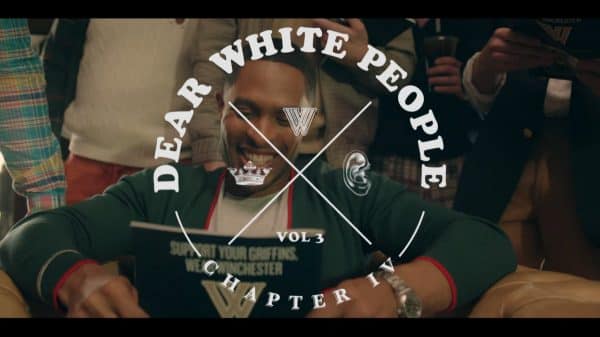 D’unte comes at Dean Fairbanks’ neck, in front of his crush, professor Sandra, due to the low pay TAs receive. Something that, with his family no longer being rich, is also an issue for Gabe, who joins the fight. Problem is, Sam has to learn this through Brooke, who Kelsey is tempted to court, and her learning that Gave lied by omission doesn’t settle right with her.

Also, at this goes on, Lionel learns there is a HIV+ student on campus and Troy is dealing with Kurt treating him as an excuse for more offensive content in Pastiche. 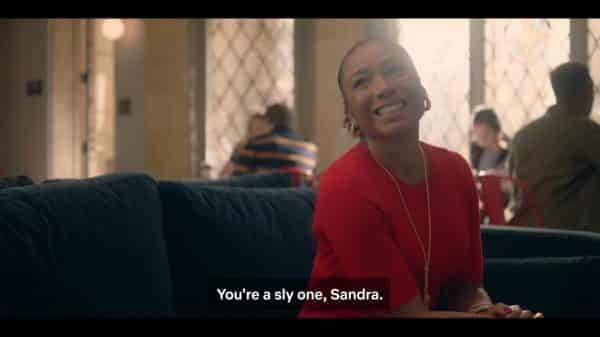 I f***ing hate being judged on my demographics.
— Sam

Soon, the unyielding manipulations of your best efforts by talentless overlords will form a callus over the joy and passion you once had for writing.
— A Person 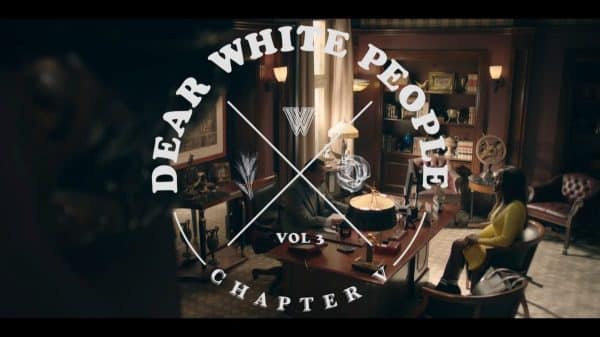 It’s Parents Weekend and while Sam is mourning the loss of her dad, and dealing with indecision, Coco is weathering her mother Evelyn visiting. Also, the anxiety that Professor Queensfield presents that leads to Penelope showing up. Partly as a manifestation of Coco’s conscious but also as a reminder of what Coco sacrificed to get this far.

Oh, and Sam isn’t alone in dealing with an absent parent. Kelsey, who seems rather close to hers, has to deal with them being unable to come. Which gives Brooke an opening and leads to Kelsey maybe catching feelings. 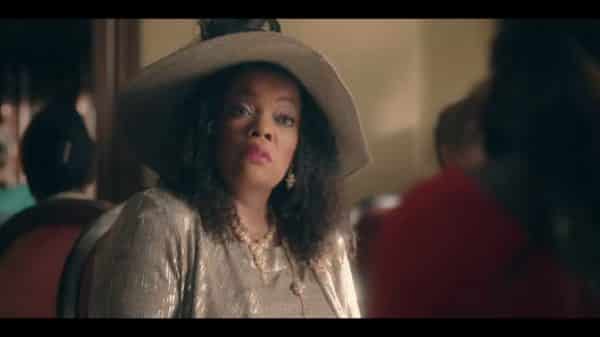 Realistic is for the ordinary.
— Coco

The only way to win, is to outwork them.
— Penelope

As Brooke lives up to Kelsey’s worst fears, Gabe is struggling with how to finance his thesis film and while he is thinking about getting a grant, the thought is put out there that with him being a straight white male, his chances are slim to none. Yet, he applies either way, maybe Elizabeth Warren’ing it (using a small percentage of Native heritage – proved via DNA). But, as this happens, he continues to try to get the TAs on the same page. Which, with Sharon, is difficult, since she seems consistently ready for a fight.

Heck, even Reggie gets some when Moses takes a liking to his ideas and ability to code. Making him speak in front of his team, which includes Sharon, leading to some friction. Yet, as Professor Moses says, a spark in the right direction will either compel things forward or just make a huge explosion. Well, that was a paraphrase but the point still stands.

Leaving one last thing, Troy tries to cause a coup against Kurt and fails. But, with the support of Abigail, he may start his own magazine. You know, while completely ignoring the one Lionel is letting die.

If you disagree […] because he’s wrong, that’s one thing. But if you’re just going to object because he’s right and you resent it, there’s the door.
— Moses

Sometimes advising means intervening, and sometimes it means staying out of the way.
— Moses 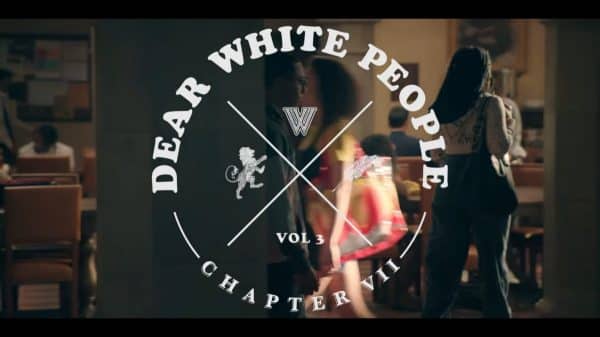 After D’unte introducing Lionel to the local gay community, he decides he wants all in. Not just for the sake of the literary sensation known as Chester but also himself. He wants a boyfriend and while Sam occupies his time and is nice, knows him well enough to say he is Chester, it isn’t the same. Which makes Michael approaching him welcomed, but complicated. If just because he is POZ and the complication that brings.

Speaking of complications, the newest members of the faculty have seemingly provided just as much confusion as confirmation. Cynthia Fray, who is seemingly very into herself, is anything but what Sam expected. Yet, Jerry Skyler, who she goes to after Cynthia dismisses her, is kind, warm, seems to know his s*** but is less pretentious about it. Leading to Sam apologizing for she didn’t see him as her people just because he wasn’t avant-garde.

And really, what the episode is overall about is finding your community. The problem is for some, like Joelle with Reggie, his community doesn’t seem to often include her. Then, with Muffy mentioning to Coco, who is struggling to pave the way for others, that Moses did something inappropriate, so begins an unexpected wave. One which will include Brooke having something to write about, besides breaking poor Kelsey’s heart.

Get community where you can.
— Michael

[…] you are surrounded by allies the minute you decide to be.
— Professor Jerry Skylar 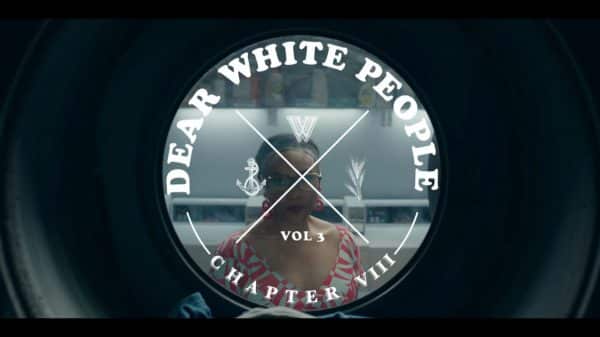 With Brooke hearing about Moses assaulting Muffy, she pushes Muffy and Coco to collaborate that story. As that happens, she also started spreading the news, verbally, which rocks Reggie who is ready to fall on a sword for Moses – who denies anything beyond Muffy trying to kiss him. Which is all Reggie needs to hear as Joelle jumps in with doubt and Reggie counters with the idea she is just jealous.

And while all that happens, Coco is trying to deal with Professor Queensfield not handing over a recommendation despite Coco being the top of her class. Which, strangely, Kurt helps her feel better about.

[…] the First Amendment affords the press rights and privileges that don’t disappear because things may become inconvenient.
— Brooke 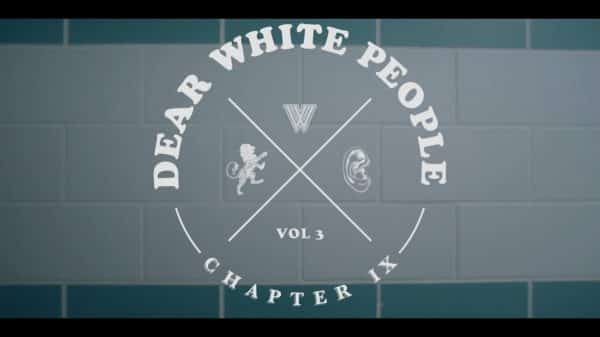 Troy and Abigail begin recruiting staff for their magazine and one of them is Brooke. Someone who keeps pressing Coco and Muffy for the story of what happened to Muffy isn’t just hers. Brooke was molested at 15 and seemingly nothing happened, so this isn’t just about Muffy or Brooke’s journalism career. This is about making it so Moses, who might have been ran off campus before because of this, not getting the chance to do this again.

Aside from that, and Troy negotiating with James for funding, Gabe is dealing with lying about being a Native American and getting a $20,000 grant because of it. Which, surprisingly, Sam is okay with, jokes about even, for that is how deep her love is for this man. But the guilt gets to him so deeply that he donates it to the strike fund for the TAs.

Leaving one last thing: Muffy, thanking Coco for all her help, writers her a recommendation letter and gets Professor Queensfield to sign it.

I was going to drink away a bad day, but now I’m going to celebrate a good one.
— D’unte 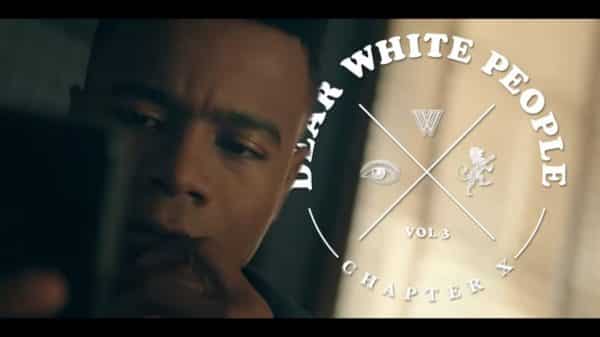 As Reggie comes face to face with who Moses really is, he also comes face to face with Joelle about how she feels about their relationship. Facing the truth doesn’t end there though. Sam also does so when it comes to her student project and that, like Brooke, she has been in a funk. One which existed since she lost her passion, in a way, and thus was on auto-pilot. Yet, that has changed now, as has her knowledge of the Order. For with Dr. Ruskin, formerly known as the Narrator, doing away with most of the secrets, minus what is silencing Muffy, Lionel and Sam know all.

Speaking of Lionel, despite some hesitation due to Michael’s status, it seems he is ready to go all-in – no pun intended. Which may have made D’unte feel a certain kind of way. But, it isn’t just Lionel who found someone, Rashid did too. He found Ikumi, a TA, also one of Moses other victims, who is he very happy with. Though not so happy he can’t rub it in Joelle’s face that his girlfriend shows up while Joelle’s boyfriend is ghostly. But, again, Joelle handles that issue with Reggie and also tells Sam that she can’t do Dear White People anymore. The show just doesn’t fit and she finds swapping shows disgusting anyway.

Leaving one last thing, Dean Fairbanks seems to officially invite his son into The Order and no sooner does that happen does Troy decide to speak to Sam and Lionel. Two people, especially Sam, who seem to be on the verge of reforming the Order, or at least eliminating the sect which will protect its members as long as they expand their influence and power.

How can you miss someone you’ve barely even noticed?
— Rashid

If you ever loved anything, the world will make you angry.
— Sam