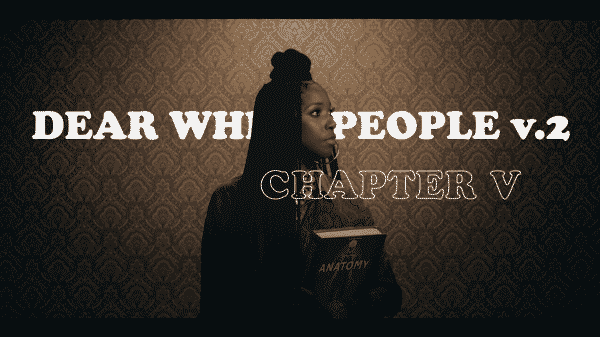 FINALLY Joelle gets her time in the sun and while they lay it on thick what she goes through, as a dark-skinned Black woman, it’s to compensate for the topic being generally avoided.

Stepping Out of The Shadow: Sam, Joelle, Gabe

Joelle, a valedictorian, med student, someone who has as much leadership qualities as Sam and Coco, finally gets developed and put on a pedestal. We learn the aforementioned facts, that her dad is a doctor, mom a lawyer, who have been together 30 years, and she had a pretty nice, Cosby Show-ish upbringing. We also learn, because Sam is clearly way too into herself, that her co-hosting “Dear White People” will be a bit of a challenge. Especially as Joelle learns that not only is Gabe friends with Joelle, but she is giving him some pointers on his “Am I Racist?” documentary.

I don’t wanna be that person, but let’s face it – finding dark skinned women starring in anything really is hard. And, in a way, a lot of shows are guilty of making it so the lighter the character is, the more interesting their storyline. The only exception, off hand, I can think of, is Insecure. Which is why Joelle and Coco are so important for they aren’t necessarily trapped as a side character or simply the best friend. As shown throughout Coco’s arc in season one, and her episodes, she has a full-on life outside of Sam, Reggie and Troy. The same goes for Joelle. She might be Sam’s best friend and now co-host, but she is also a med student with a Cosby Show-esque background.

But let me say this, this show was a bit too heavy handed with talking about Joelle’s skin and saying she is pretty. Like, on one hand, it isn’t heard enough but at the same time, you’re going overboard with the message.

I Believe In You & Me: Joelle

Could it be? Like Lionel that Joelle has found her perfect match? He is intelligent, Black, likes white watching as much as she does, and he is aware? I mean, also he is a bit bougie but Black and bougie ain’t a bad thing sometimes. I mean, it did lead to her having quite the fancy meal so, she could be a bougie girl.

Best of all though, spending time with him was nothing and he wanted more. Plus, considering the way Reggie is, and Rashid seeming interested but shy about it, Trevor is just what a sister asked for.

But unfortunately, he is a hotep. Which, for the uninformed, a hotep for Black people would be like a feminist who is anti-men. They are over the top, problematic, and generally if you aren’t like-minded, annoying as all hell. Case in point, Trevor uses the word “fag” liberally, while watching an Empire spoof; calls Sam a Halfrican-American, as well as a mutt, and just really makes an ass of himself. To the point, Reggie steps in and to perhaps relieve some stress, knocks this football player sized man down.

Which sadly leads to AltIvyW posting about Black on Black crime. Pushing the idea that the person controlling that account is within A-P. So, hopefully, with Carson coming to Winchester, and the Black Tomi Lahren, Rikki, maybe this person will get exposed and Sam could get into a fisticuff of her own.

Would it honestly have been that bad for Joelle to find a nice guy? One that wasn’t with Sam before and made her feel special? Because, the way she makes it seem, as soon as people meet Sam, it is a done deal for her. But I guess we, and Joelle, can’t have it all huh? The episode wants to dig deep into how attractive she is and question why she is single, then have her get matched with a hotep.

I can only hope Rashid steps up because now I’m salty and feel disrespected on Joelle’s behalf. Also, she better not get this moment in the sun and then get put back in Sam’s shadow either. I know Troy has to have his own episode and then Sam again, so here is hoping Joelle gets a two-episode deal this season too. Because, at this moment, her, Coco, and Kelsey a bit, since she is the type of weird Black girl we rarely see, I need more of.

[The] only thing they love more than saying they gave one of us a chance is seeing us squander it.