Sabrina finally discovers who Ms. Wardwell really is and tries to prevent the apocalypse – but is it too late?

With the possibility of being the herald of hell on her head, Sabrina turns to Ms. Wardwell and Ambrose to help her figure out an alternative. This leads to the idea of having a mandrake absorb her powers, kill it, and then her powers being released into the universe. A bold plan, an unwelcomed idea by all, especially Nick and Ambrose, but Sabrina makes her decision. What she didn’t know though, until Lilith’s monster, Adam, tried to kill her, is that it worked. 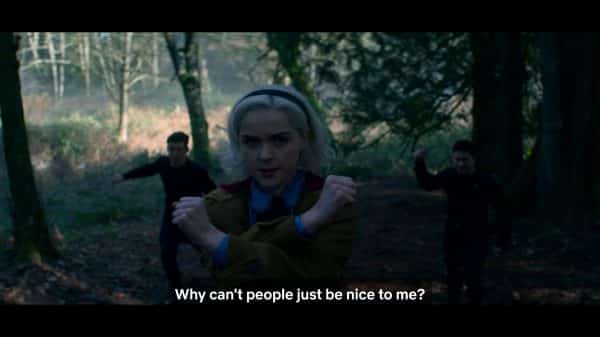 Mandrake Sabrina: Why can’t people just be nice to me?

The problem is, however, while the mandrake is touted not to be too smart, it knew to leave its shell, leave, and replace itself with a mandrake that wasn’t transformed. Thus, it was given time to try to assume Sabrina’s life. But, mandrake Sabrina runs into issues as Roz realizes what she is, Harvey rejects her, and Theo is against her using her powers to further her transition – mostly because of the language she uses.

Father Blackwood, disgraced, yet still a High Priest it seems, and head of the Academy of the Unseen Arts, decides it is time to start the Church of Judas and turn his back on the Church of Night. While doing so, Zelda warns Hilda who tries to appeal to the council, but they close ranks. Well, at least it appears so until Methuselah, the man who often speaks for the council, says that was for appearances while speaking to Hilda in private. But, before seeing him as an ally let it be noted with a touch of her lower back and then her inner thigh, it becomes clear he is like the rest. Hence Hilda’s familiars, spiders, trapping him like a fly.

Which is a bit of a problem since Father Blackwood realizes Zelda is no longer under a spell and with Prudence snitching on her to win browny points, she is put in prison. Yet, before that happens, she helps Prudence see, as he now has Leticia thanks to Prudence, his love for her is circumstantial, and he’d let her die without much worry. Leading to her freeing Zelda but staying at the academy for the sake of her siblings, weird sisters, and the other orphans. 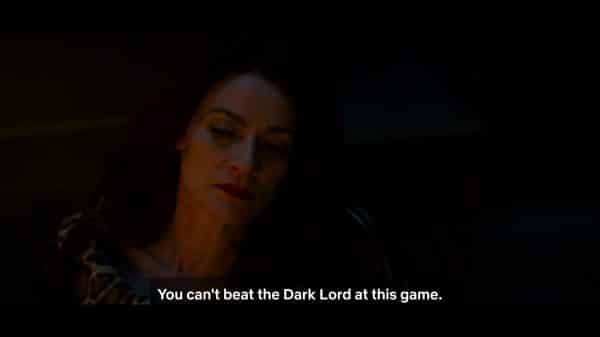 Lilith: You can’t beat the Dark Lord at this game.

Thanks to Dorothea, Theo wakes up just as Harvey’s mandrake rises and kills him. Then she kills the rest and wakes up the originals. Oh, and I would be remiss not to mention Father Blackwood sends some of his boys to kill Sabrina, they come upon mandrake Sabrina, and she breaks their necks. Yet, with seeing her mandrake creations killed, all she can do is scream as Harvey, Theo, and Roz run away.

Leading to a moment which is a mixed bag. The good part is Lilith, who was confronted by Sabrina and Nick, then tied up which, honestly, continues to push how disrespected villains are on this show. Anyway – she was tied up, and as Nick reads the prophecy, she comes to realize that Sabrina was meant to become queen all along. So while she originally didn’t give af about the end of the world, then she suddenly cared. For all Sabrina was left to do to cause the apocalypse was suicide.

Making her have a duel with her mandrake, and killing her, the last perversion of the Nazarene required for hell to open up. That is after performing an exorcism, resurrecting the dead, going into limbo, singing the book of the beast, and conjuring hellfire. 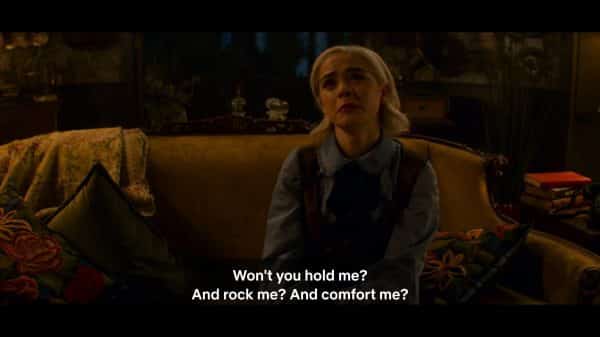 Mandrake Sabrina: Won’t you hold me? And rock me? And comfort me?

While rude as hell to Theo, there is a slight need to wonder if, at her core, mandrake Sabrina represented real Sabrina’s feelings. For it was made clear earlier on seeing Harvey and Roz together was a bit of an issue – when she was having food with Billy. Plus, Nick clearly senses there are lingering feelings, as did Roz. Which is perhaps why mandrake Sabrina wanted to clear the air.

Now, as for the Theo thing? Lest we forget, Sabrina is a bit selfish and likes to have people do things for her that make her comfortable. So Theo becoming more masculine could be what Sabrina wants but isn’t rude or bold enough to say. Since, while she calls Theo by his name, that doesn’t mean she isn’t like how Harvey was early on about the whole thing. Though a staunch feminist, and likely an ally, it doesn’t mean she is perfect.

But her interactions with Sabrina’s friends aside, and recognizing she is essentially a child, it does make you wonder if mandrake Sabrina also represents how vulnerable Sabrina feels. Nick, as much props as he deserves, it’s hard to say if Sabrina broke up with him if he would continue to do all this. And I think with Sabrina being told off by Prudence about being selfish, that likely hurt and she suppressed it. Leading to mandrake Sabrina expressing the feelings of isolation, loneliness even, and showing us a side of Sabrina she’d never expose.

You Don’t Have To Look Like Sabrina To Be Harassed

Methuselah harassing Hilda was a showing that sexual harassment isn’t only done towards the young like Sabrina or model types. Perverts and misogynist are equal opportunity and take advantage of those like Hilda since, in their twisted minds, they see them as vulnerable and in such need of them they wouldn’t tell. Heck, maybe even think they are doing them a favor. Making Hilda’s familiars possibly killing Methuselah A-OK! Theo: Yes, but Sabrina, I already see myself as a real boy.

Revisiting the Theo subject, I just want to add how Theo reaffirming he is a boy because he says he is matters. That it doesn’t matter he was assigned a girl, looks feminine, none of that. He said what he said and is what he says he is – that’s that.

Villains On This Show Are A Joke

Lilith is possibly one of the oldest witches in existence, and she got taken down by Sabrina, while she was mortal, and Nick. A monster she created, from her rib, was subdued quickly by a kid. Heck, Methuselah, one of the most powerful warlocks there likely are, was handled by a familiar and Hilda. It’s like, they build up these people and then tip them over like stuffed dolls.