Remember the witch hunters that the show stopped talking about? They’re here, and they awaken something, or someone, intense enough to make you tear up a little.

With Hilda and Sabrina firmly claiming Ambrose’s innocence, it makes hearing he is being tortured troubling to the point they summon the Trivium Unholy. Beings who say there will be no trial, and when Father Blackwood returns, confession or not, Ambrose will be executed. Leaving the only thing standing between potential freedom and death being Prudence, Dorcas, and Agatha. Sabrina specifically tries to appeal to Prudence, claim friendship, but as it the running theme of the episode, Sabrina is more focused on how she feels and what she needs than others. Leading to her pleas not being heard.

However, thanks to Hilda, and a well-done chicken, Ambrose is able to make a skeleton key. 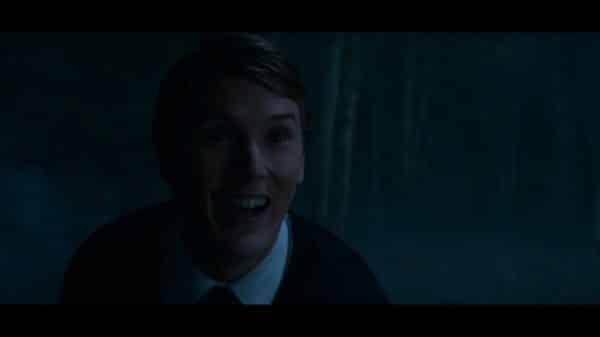 Luke is, in fact, dead, and seemingly he was killed by the angel, yes angel, who likely killed his ex-boyfriend: Jerathmiel. Someone who, with his peer Mehitable, tries to kill off the outlier witches, those who either traverse the human world or aren’t in witch centers, like Sabrina’s family, Nick, and Dorian. However, as seen when one of them, not one of the two named, go against Dorian, they aren’t necessarily all powerful. Formidable yes, but with Roz being able to sense them in time for Sabrina to run, it shows they are by no means an unstoppable force.

Heck, Dr. Cee, when unbounded by Hilda’s charm, is able to scare one off and not leave him with any wounds it seems.

While Jerathmiel fails to kill Sabrina thanks to Roz having a vision and Mehitable fails to kill Hilda, they do take the Academy by storm and take down Prudence, Agatha, Dorcas, and nearly kill Ambrose. Luckily though, for Sabrina anyway, these angels seem to have an issue finishing the job with any noteworthy character besides Luke. Thus giving her time to get to the desecrated church as Hilda tries to keep Ambrose alive with Nick guarding her.

However, between a thorn crown placed on her by Mehitable and Jerathmiel shooting multiple arrows at Sabrina, she is not only unable to use magic but seemingly dies. But then she is resurrected in a brilliant display and forces the angels to recite the Dark Lord’s prayer before killing them. Then, to follow that up, she resurrects two witches to the shock of all in the room. Leaving Harvey, someone born into a family of former witch hunters, to see Sabrina, floating in the air, eyes white, looking God like.

If I was to be honest, while you have to appreciate the messaging of Sabrina, often times it makes for a slightly tedious show to binge watch. Which isn’t a dig at the show for most of Netflix’s shows aren’t geared to be binged. They are episodic shows, no different than any other station, that just don’t have the limitations their counterparts have. Making the main reason you binge is because you already have access to the next episode.

But, with the way this episode ends, you have to be compelled to check out the next episode. It isn’t a ho-hum ending, one which makes it so you want to finish the season since you already started it. No. Sabrina rose up like Jesus and set angels on fire. On top of that, Harvey, who has been getting a crash course on the witch’s world, including meeting Quentin, saw it all and likely will never be the same.

The Introduction of the Order of the Innocents

I can’t get past the witch hunters being dropped halfway through season one then suddenly coming around halfway through season two. It really cut into whatever build up they could have had, and while they had a certain creepy factor and made their presence known, it’s hard not to shrug them off. Mostly because, their first appearance was their last. Which may boost Sabrina a bit, for how intense she was before she killed them did bring tears to my eyes – which I want to assume were tears of joy and not fear. But in wiping them out so soon, it completely undercuts them as a threat. Though when hasn’t Sabrina undercut her would be adversaries on this show?