Wherever I Look
Recaps, Reviews, and So Much More
Home TV Series Black Lightning: Season 1/ Episode 5 “And Then the Devil Brought the Plague: The Book of Green Light” – Recap/ Review (with Spoilers)
TV Series

Black Lightning: Season 1/ Episode 5 “And Then the Devil Brought the Plague: The Book of Green Light” – Recap/ Review (with Spoilers)

For those wondering about the origins of Tobias, as well as his beef with Jefferson, Anissa begins that journey this episode.

If You’re Not Ending It, You’re Just Dosing The Flames: Jennifer, Jefferson, Lynn 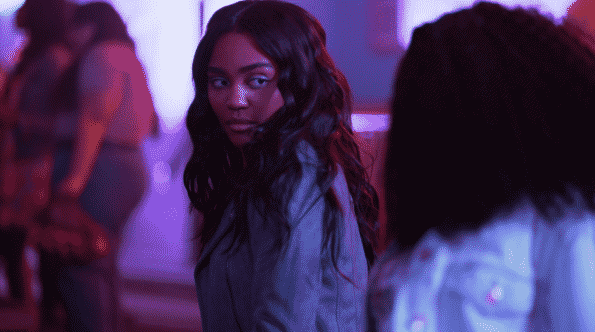 Jennifer gets a break from being the faithful girlfriend this week and instead tries to just be a teenager. Which unfortunately means drama. Though, when Kiesha is involved in anything, isn’t there always drama? In the case of this episode, it is dealing with Lana, a rival on the track who, alongside her girl, talk smack to Jennifer, uses Khalil’s injury to insult her, and they try to jump her!

However, it seems between karate practice and maybe having powers of her own, Jennifer whoops both their behinds and breaks Lana’s wrist. Something which becomes a bit of an issue for Jefferson and Lynn because the girl’s mothers, or mother and aunt [note]it isn’t clear what the relationship is[/note], come to Jefferson’s home to vent and expect restitution. Especially because this is Freeland where ain’t nothing free and the people are mostly struggling. So going to two doctors and the bills they send? HA! Naturally, Jefferson is looked at to cough up some money.

Which, between Lynn and himself, they do. All the while Jennifer gets in trouble for defending herself. Well, at least with Lynn. Jefferson is trying to hide how proud and shocked he is.

As Jefferson overexerts himself, partly thanks to Gambi’s new suit, he finally learns who one of the major dealers of Green Light is. Tobias’ right-hand man – Joey Toledo. Someone who Jefferson tries to work with Henderson to take down but, it ends up having to be a Black Lightning problem. Which becomes unfortunate since Jefferson is having violent, debilitating, migraines. I’m talking the kind that makes it so this trim football player sized man ends up getting his butt whooped by Joey. Someone who has the look and body of a grunge music artist.

Who is Tobias is the big focus of the episode. Lady Eve introduced us to his past as a politician, but we didn’t go in depth. However, with Tori’s appearance, we begin to unravel who this pale man is. Well, for one, based on a conversation with Gambi, we learn he is a man who does not age. Taking it further, as Anissa does research to look into her powers, she stumbles on information about how 9 kids in 1987 were discovered to have enhanced abilities. Also that these kids vanished but, her grandpa Alvin was looking into.

Now, while Anissa would love to go to her dad to learn more about her grandfather, as made clear by the bloodlust Jefferson has, his dad is a touchy subject. So, Anissa ends up at Alvin’s former job and talks with David Poe, Alvin’s former boss at the Freeland Gazette, where he was a reporter, to try to uncover what her grandpa was up to.

Leading to her slowly discovering that her grandfather was on the verge of discovering something quite wicked. Alongside something so dangerous that David tries to originally brush her off but upon realizing she is Alvin’s granddaughter through and through, he just gives her the info he has and a warning. One which she best heed.

Especially because it may send her on a collision course with Tobias and Tori. Two people that, with all that is going on, decide to take a break from Black Lightning hunting to handle unfinished business. Said business being their abusive father Eldridge. Someone who would physically and mentally abuse them, but his claim to being a good parent is that at least he didn’t abandon them like their mother and did provide food and shelter. Leading to the question, as Tobias breaks the man’s back – why?

A question which goes unanswered, just like what is this “vaccine” that Tobias took? One which helped him be able to walk into the sunlight. Alongside who are these other kids and whether Jefferson is one of them… Oh, and is what Anissa found in that safe, which looks like crack cocaine, the last of the vaccine?

“The one thing you can’t take away from me is the way I choose to respond to what you do to me.”

Digging Into The Past To Explain The Present

Though, like many, I love adaptations of comic book properties, I generally don’t read them. Which, of course, most shows and movies don’t require you to. However, like many an anime fan will tell you, in order to truly understand what is going on, you need to read the source material. But, thankfully, Black Lightning is starting to dig into the past so you don’t have to read a thing besides subtitles.

Now, unfortunately digging into the past doesn’t answer the many questions in regards to how Black Lightning got his powers, or how they work, but it does drop some hints. Well, at least to me. For with it being noted there were multiple kids in 1987 who, due to some vaccine, got powers, arguably Jefferson could have been one of them.

In my mind, Jefferson could have been a sickly kid, similar to Tobias in some way, and Alvin turned to some experimental drug treatment to make him better. Heck, maybe these headaches/ migraines aren’t because of his powers but what he took the vaccine for to cure? After all, who is to say there isn’t some nerve disorder going about that, with Black Lightning overexerting himself, is making it so he is going beyond what the vaccine was supposed to do?

But, while the topic of this vaccine explains why Jefferson has powers, it does make you wonder how did it mutate his genes to the point, arguably, both daughters have some sort of powers now. Anissa for sure but maybe Jennifer as well?

Though, perhaps the main person who benefits from looking into the past is Tobias. The albino crime lord talks about his high as a politician, one who used to be equals to Lady Eve and her peers, to now being underfoot. Someone held down underneath her toes perhaps because he might be a true threat? Well, who knows what Lady Eve thinks. We’re not even sure what she does when Tobias is around, besides maybe work in a funeral home as a cover.

However, you gotta admit between the way David Poe was acting, Alvin’s death, and Eldridge raising these kids despite seemingly hating them, it raises some eyebrows on how these things might be connected. Especially since we don’t get to see Tobias as a kid and while we may have touched upon various topics of his past, it was but an appetizer for a bigger meal. One which I hope comes soon since I’m truly starving for more!

While you have to give her props for looking unlike herself, as opposed to her dad who just puts on a mask which looks like it is from a Party City Batman costume, it was… eccentric. Between the wig and colors, and the eye makeup, I can only hope this is just how she starts off her look and this isn’t something we have to get used to.