It seems like DC and the Akils are looking to steal some of Black Panther’s thunder (I couldn’t help myself) with the premiere of Black Lighting.

After 9 years of realizing fighting crime isn’t worth losing his family, Jefferson Pierce finds himself coerced to perhaps returning to his mentor Gambi and becoming Black Lightning. However, this is done purely out of frustration than a hero complex. You see, the final straw for Jefferson was his now ex-wife Lynn divorcing him over his role as Black Lightning and his eldest daughter Anissa nearly seeing the damage after a night fighting crime.

Yet, strangely enough, what the eldest child inspired to end the youngest one, Jennifer, inspires to begin anew. For despite how successful Jefferson’s kids are, with Anissa in med school and Jennifer a star at Garfield High School, where Jefferson is the principal, they got qualities of Jefferson’s former life. Anissa is a bit of a superhero, in her own way, through her protesting the existence of this super gang known as The 100 (not to be confused with the other CW TV series). This super-gang, ran by Jefferson’s arch-nemesis Tobias, runs Freeland. I’m talking, they can commit 125 shootings in one weekend as a show of might and the police get completely overwhelmed.

All of which, Jefferson, in the pitiful hopes to get his wife back, side steps for he has made a deal with local gangs, including his former student Latavious, aka Lala, to make Garfield a safe zone. Yet, as Will, Lala’s cousin, gets involved with Jennifer, and threatens her and Anissa, Black Lightning is reborn to the delights of Gambi.

However, between Inspector Henderson and Tobias, you can tell not everyone is going to welcome Black Lightning back with open arms.

The promise you made […] was well-intentioned, but it always had an expiration date.

Outside of The Chi, what show starring a Black person has characters named Anissa? What other shows are filled with phrases from civil rights leaders in such a way it is like you should expect them for more than just the opening episode? What other show employs ebonics alongside empowering language and shows code-switching in such a way that it looks like a linguistic talent? Black Lightning. 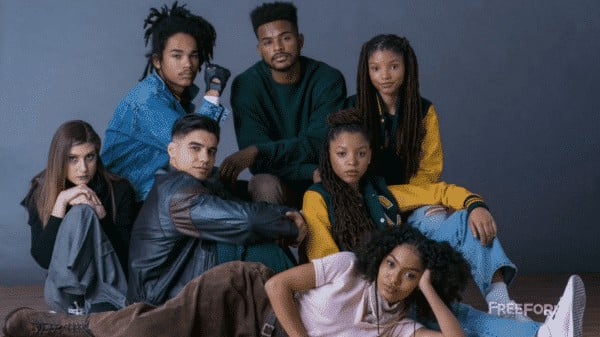 Grown-ish won’t fulfill A Different World fantasies but definitely fills a void, sometimes by doing too much.

And I bring this up because, more often than not, to reach a broad audience, you see shows, similar to Grown-ish [note]opinion is based on watching premiere[/note], present a little bit of everyone so, as Taraji P. Henson said in her Build interview, the production can appeal and get everyone’s money. Yet, in the process of that, it is like everyone gets diluted so while there may be a slew of different faces, you don’t get a strong sense of each person’s culture.

Black Lightning says F that all the way. For on top of presenting different aspects of Black culture, ranging from The Cosby Show idealism to an almost The Wire type of urban life, we also get various shades of Black hues. We get Black women who can not only whip ass but be carefree, have various hairstyles, and really the only thing missing is women of different body types. Though, with Jill Scott playing a role in this, it seems not everyone will be of a, at most, slim-thick size.

And on top of that, they have meaningful roles and lines which matter. Also, taking note of Anissa seemingly have powers, it could very well be she and her dad are going to become a serious team.

Leaving one last thing, it also addresses various aspects of Black culture. Whether you are talking about civil rights leaders, police brutality, gang and drug culture, you see a bit of it all. Both the positive, in the form of Jefferson’s come up, and the negative, which is the life Lala leads and escorts others into. Like when he was really trying to put Jennifer into sex trafficing.

The Villains Are Compelling, Whether You Know They Are Evil or Not

Whether you are talking about Tobias, Lala, if not Ms. Kara or even Inspector Henderson a bit, if he truly is against Black Lightning’s existence, you got to love this villain suit. Tobias, this clearly albino Black dude, he runs a ruthless gang and seems like the type of villain we’d see in the New Jack era of films. Lala is a bit more modern, and he shows this interesting complexity. On one hand, being that he came up during Jefferson’s 7 years, thus far, as a principal, you can see a lot of Jefferson’s teachings influencing how he does business. Yet, at the same time, he is working for Tobias and that is also clear in his interactions with people.

As for Ms. Kara and Inspector Henderson? Neither one are evil, per se, but they do bring complications. Ms. Kara is clearly a middle person between James’ vision for the school and the people with money who fund the school. And while she seems loyal to the kids and what Jefferson is trying to do, I can imagine her tipping his behind off if he begins to cause trouble that isn’t’ beneficial to the kids or her. Then with Inspector Henderson, with it being clear he wants the cops to regain respect and admiration in the city, a vigilante he can’t control will be an issue. One which, seemingly, in the past, he tried to do away with. However, with him back and considering the state of the city, it should be interesting to see if these two get along at least for the sake of a mutual goal.

There is something heartbreaking, in a way, about how Jefferson looks at Lynn. This man has kept the faith that even after 9 years, this woman may come back to him. And while it isn’t clear if she may have moved on, or even tried, you see lingering feelings there. The kind which makes you want to root for them and even if Kara is hinted as a possible threat, it is hard to not love that no matter who Jefferson chooses, he will be with a clearly, unquestionable, Black woman.

To be honest, with this being on CW, I wasn’t sure if I was going to watch this. Primarily because CW isn’t carried by my provider, but also because I haven’t found any reason to watch the network since The Carrie Diaries ended. Yet, here I am and honestly, as we wait another month until Black Panther, honestly Black Lightning maybe acting as more than the appetizer but also the meal. With Black Panther as the dessert.

All thanks to the magical work of the Akils. Probably two of the most underrated creators of Black media in the business. I’m talking, your favorites of this generation, from Lena Waithe and surely even Ava Duverney, there two, especially Mara, are their inspirations and as I watched this, I got it. So, fully expect to see me cover this more as I borrow someone’s password for a means to watch this.