Grown-ish won’t fulfill A Different World fantasies but definitely fills a void, sometimes by doing too much.

Zoey has left the nest and entered college and she has gone from a big fish in a little pond to a little fish in a big one. All that confidence and feeling like she has a handle on things? SWOOSH. Now she is lonely, low-key desperate, but lucky enough to find herself quickly making the acquaintance of quite a few people.

Nomi: Maybe or maybe not named after the Sense8 character, Nomi is a slightly rough around the edges young woman who is into Swedish Death Metal, is Jewish, and either bi-sexual or just straight up pansexual. It isn’t clear which but what is made clear is that she prefers not to be seen different, especially by her parents, due to the things she enjoys and the labels attached.

Jazlyn and Skyler: These twins basically are track and field’s Venus and Serena Williams. However, while they usually have this sugar sweet, all-American, facade in public, if you get to know them, you’ll see they are around the way girls through and through. However, if you want your face on a Wheaties box and sponsorships, sadly you can’t keep it real unless you want to end up a sex worker at a donut shop. Plus, like the Williams sisters, being that they are becoming a symbol of hope, as it seems most Black sports stars inherently become, there is also this fear of letting the people down who look towards them. 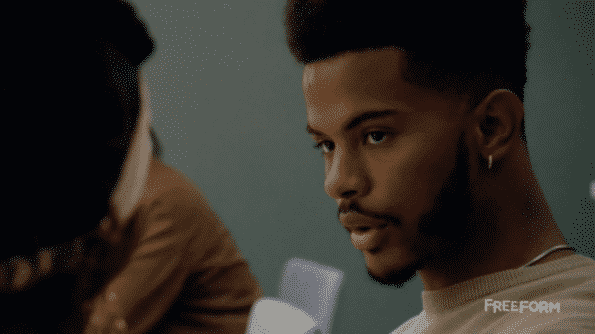 Aaron: A young man so woke that he seems to be overcompensating for something, Aaron is Zoey’s crush. Though, better said, he is this guy Zoey is completely infatuated with. I’m talking to the point that when she is around him, she resembles the goofy nature of Junior more than the Zoey we know.

Luca: Just like Aaron sort of seems like a character out of Dear White People, Luca seemingly is a genetically modified version of Jaden Smith – which I mean in the nicest way possible. This dude who is into fashion, smokes weed, and seems very sure of himself, is the kind of character I wish I saw growing up. So while it may be quick to compare him to the legendary Jaden Smith (I know I’m speaking too soon but it is destined), you can see the inspiration clear as day.

Vivek: An Indian American male, he has lived and dealt with 1st generation immigrant dreams pushed by his parents to focus only on STEM-related occupations and avoid anything creative. Yet, what Vivek wants to do is be an Indian Drake. Including the look. So, being that his parents, including a father he slightly disdains for driving a cab for 35 years, can’t afford Yeezys and all that, he sells drugs to cover the costs.

Ana: A conservative Republican, with a secret love for Obama, who is struggling like Zoey to get acclimated, she is the true first friend Zoey makes. Also, she is the first person Zoey screws over in college when she abandons a first time drunk Ana to keep hanging with some random cool kids. Something not easily forgiven and it makes them suddenly becoming roommates so awkward.

Yet, once Ana gets over what was done and listens to Zoey give a heartfelt apology, they begin to heal their relationship. Also, Ana gets to rest her middle fingers. Thus giving Zoey all the different kinds of perspectives she may need so that her thing can become her people versus, drinking, smoking weed, Adderall, or another vice. 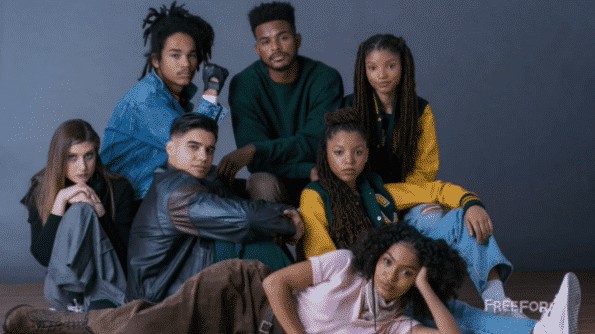 Being that diversity and inclusivity are major goals for new productions, especially featuring people of color. On Grown-ish, you have a Black female lead, two additional Black women featured, a Jewish woman, a Black guy, a Indian guy, a Hispanic girl, and that is just surface level. On top of that, we have various socio-economic backgrounds ranging from the twins and Vivek coming from working class families, those which come from money like Zoey and maybe Nomi, and those in the middle like Aaron and perhaps Luca.

Thus giving us more perspectives, in one show, than even Shonda Rhimes I think gives. And I’d argue she has been one of the major champions of not just diversity in skin tone, but also addressing how people with those skin tones have experienced America.

Like Andre, Zoey does a lot of narration throughout the show to clue you into her thoughts and perspectives, but the funny moments, where the memes and .gifs will come from, will come from when she talks directly to us. Especially when she admits she doesn’t have a handle on a situation and asks of us not to judge her.

We’re All Just Wandering Through The Dark, Trying To Find The Light Switch 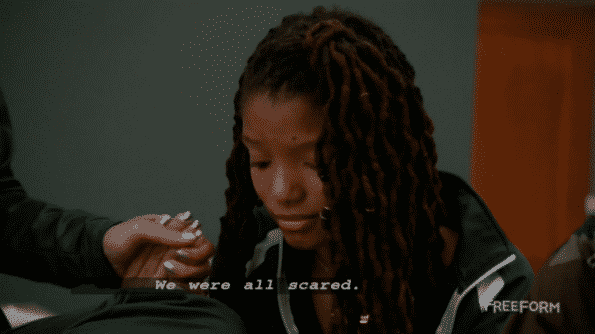 While some have a better handle on things than others, like Luca seems chill about life and the pursuit of fashion, everyone else you can clearly see the struggle is real. Trying to make something of yourself, either to make people proud, find stability, maybe create opportunities so if people don’t accept you they can get the finger, all of that is given to us. Thus really creating this idea that no matter who or what you are, no matter the age, this show wants to connect with you and present to its audience that you are not alone, and when you bump into me, try to avoid stepping on my shoes.

You know how some people criticized She’s Gotta Have It for seeming like Spike Lee was an outsider writing from a perspective of what it would be like to be an insider? That vibe kind of exists with Grown-ish. In a way, taking note it doesn’t have any recent peers, the show seems to desire to cram every type of character that has been made into a second fiddle into a potential lead and with this being a comedy, they all come off as low-key caricatures. This idea of who and what millennials are and part of the reason I say that is, despite the show clearly wanting to give us real deal people, this is a comedy. Not a comedy in the sense of what we see on Showtime and HBO, but something in which we’re supposed to laugh more often than feel.

Thus creating a bit of a conflict, at least for me, since I want to take these people and their situations seriously, but everything always seems to be building toward a punch line. Even if the punch line is laced with a lesson or note of how relatable the character is or can be.

Do Friendships Really Develop That Quick

A part of me feels the need to side eye how these characters, quickly pointed out to us, damn near in a rundown, are very different, quickly became a sort of group. Much less, were revealing insecurities to one another over due to a survey to figure out why they took a barely legitimate marketing class that begins at midnight. 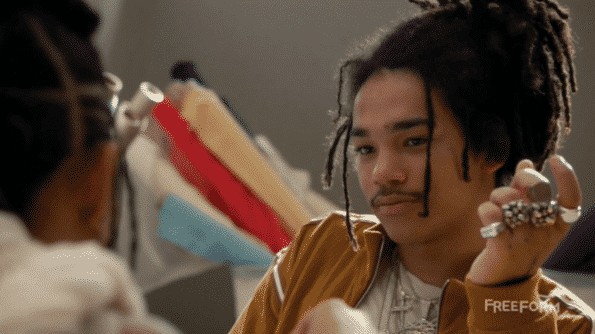 Full disclosure, I wasn’t really sold on Black-ish when it started either. I appreciated what it wanted to do, and has done, as I do with Grown-ish, but something just doesn’t click with me. It might be the same thing which sort of bugs me with Shonda Rhimes’ productions. While I, like many, want to see diversity, inclusion of the characters cultures, and diversity to also expand beyond different colored faces, when hit with everything at once, it comes off as a bit of a turn off.

I think the best way to put it is that it is like having a sample platter where everything is good, but nothing is filling. So as much as I may enjoy these various perspectives, cultures, and how all that surmises each character, there is also this feeling that by trying to give us everything we aren’t truly given much of substance. We get told more things about a character than we necessarily experience.

That, as much as we are hyped about seeing ourselves, our cultures, and things like that featured, at most we get a hat tip and not a full, “This is the Black, Indian, Hispanic, Jewish” or etc., experience. For in the long run, characters are written and treated separated but equal. They’ll list you all the ways this person is different from some kind of norm, but rarely take the time to explore it. After all, to do so for one means you have to do it for all and that, for a half hour comedy, slows down the big, over reaching goals.

So, overall, though I feel a sense of Black guilt for not hooting and hollering over a show made by Black people, with the majority of its cast being Black people, I think I’ll be a binge watcher vs. watching this live. For while a good program, I feel like in the pursuit of Grown-ish trying to win over so many different demographics it kind of lost me in the shuffle.