Happy Death Day is a surprisingly good horror movie, until the killer and their motive is revealed.

Table of Contents show
1 Trigger Warning(s): Vomiting Happens In The Film and A Rape Like Situation
2 Summary
2.1 Other Noteworthy Facts & Moments
2.2 Question(s) Left Unanswered
3 Highlights
3.1 Jessica Rothe & The Fairly Interesting Plot
4 Criticism
4.1 The Killer’s Motive Was Utter Trash
5 Overall: Positive (Worth Seeing)
6 Stream or Buy
7 Follow Wherever I Look on Twitter or Like us on Facebook.

Trigger Warning(s): Vomiting Happens In The Film and A Rape Like Situation

Teresa, often called Tree, is a Kappa sorority girl who, like many in Groundhog Day movies, is a bit of an ass. One which, as she finds herself having to redo the same day over and over, September 18th, she becomes nicer and nicer until she is actually a likable human being. One that doesn’t act rude to some girl who just wants a signature for some environmental petition, isn’t rude to these really sweet guys Carter or Tim, much less isn’t the mistress to Dr. Gregory Butler, one of her professors.

Though, like Before I Fall, the only way she can break this loop isn’t by being a nicer person but figuring out a mystery. In Happy Death Day’s case, who is the person who keeps killing her no matter what she does? 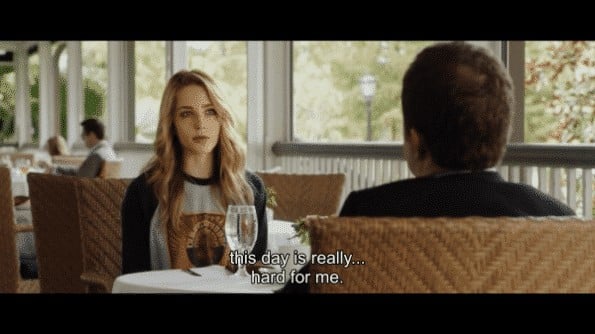 Though Teresa’s journey isn’t at all knew, and the film itself mentions Groundhog Day towards its end, surprisingly it can maintain your interest. I equate this all to Jessica Rothe. For while she has your generic, college-age white girl look, the kind which fills every horror movie, she gives us something more. Which primarily comes through in how the movie tries to redeem Teresa.

Now, again, we’ve seen the plot done so many times with very little changes. Yet, Rothe brings the type of skill and talent which, if you cut the pieces out in which she is talking to her father, being cute and low-key obnoxious with Carter, and other similar situations, those scenes seem foreign to a horror movie. After all, horror movies generally aren’t known or praised for their acting. Story, yes. Villain, when they are good. Also their scare tactics. But outside of last year’s IT, praise for acting is basically nil. At best, the actors involved may get called campy, but that’s a very underhanded compliment.

But with Rothe, it is like she is making the best of the opportunity given to her. She’s an actress who has been attached to notable shows and movies, including La La Land, but wasn’t necessarily front and center. Till this film, I’d argue she was just another attractive looking actress who melded in well with the hundreds of others who possess this college sorority girl look. A problematic thing to say perhaps, but let’s be real. Unfortunately, actresses, more than actors, have to prove they’re more than a pretty face before they can be taken seriously. Especially in an industry which, with the noted rampant sexism in the news, is more about looks than substance.

Getting back on point, however, Rothe truly takes what could be seen as another stab wound to the horror genre and tries to actually close one of the wounds.

The Killer’s Motive Was Utter Trash 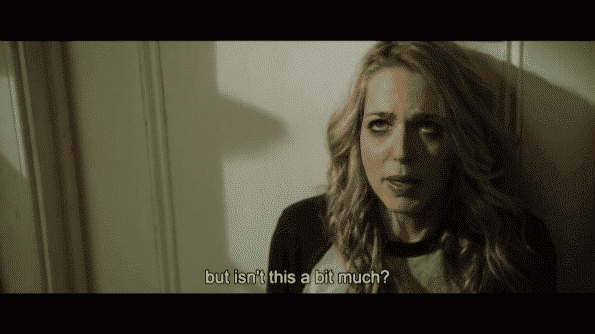 However, she isn’t a miracle worker. While Rothe will get you into Teresa, make you fall for her burgeoning relationship with Carter, and maybe get teary-eyed as she talks about her mom’s death with her dad, it all falls apart in the end. For as it is revealed who her killer is and why they keep killing her, it leads you to go, “REALLY?!” Sort of causing a vacuum which sucks out a lot of the good the film had, especially as you are left wondering, despite your usual struggle, how in the world will Teresa have a normal life when it looks like she more so murdered the killer than was acting in self-defense?

Despite an utterly trash ending, for a horror movie, this was quite good. It recognizes that it isn’t revolutionary or really pursuing much in terms of remixing the story you are familiar with. Yet, it pushes a quality mystery and a more compelling lead than other films in order to stand out.

Hence the Positive label. Is this necessarily good in a general sense? No. Like most horror movies marked positive, it is good if solely compared to other films within the genre and not moves as a whole. But, even with that caveat, I still think this is worth checking out. Even if the villain reveal and motive takes the luster off the movie a little bit.