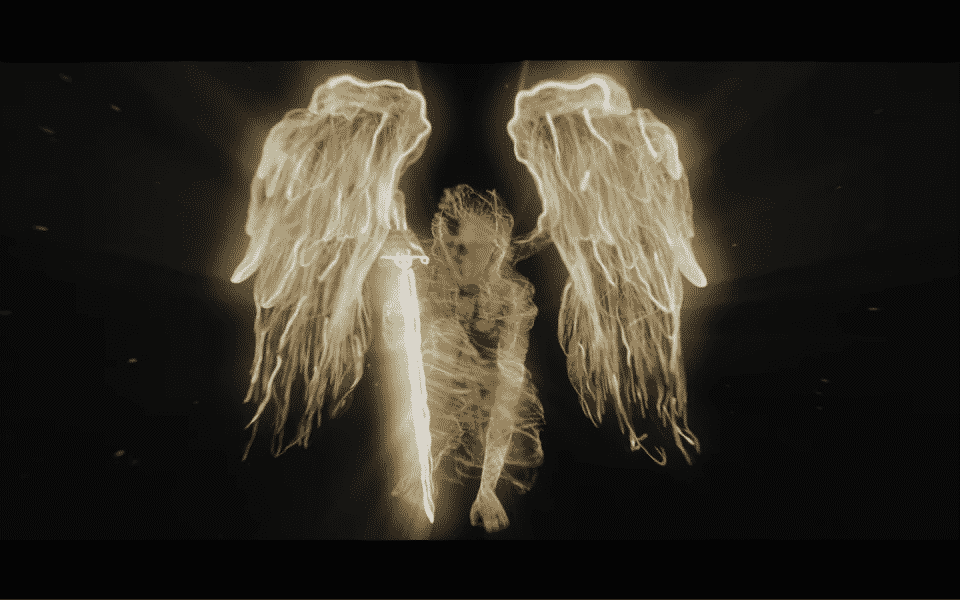 As usual, Rei delivers more shocking information and it sets Takeshi’s focus for the next season. 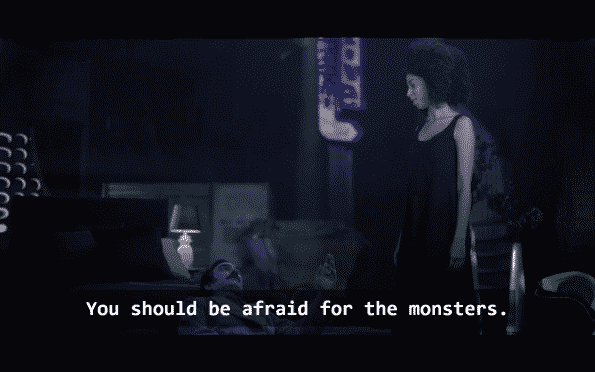 What is a season finale for a show like this without characters dying? Well, unfortunately Poe is one of the major deaths. It is handled by Leung and stems from Kovacs repeating the mistakes of his past. Which is making major decisions which affect Rei but don’t include her input. So, an example is made. That and she has Ava and Vernon dragged up to the Head in the Clouds.

However, before Poe dies, he has one last conversation with Lizzie. Someone who asks to be sent to the array and ultimately ends up in the mainframe of the Head in the Clouds. Taking over a synth body. 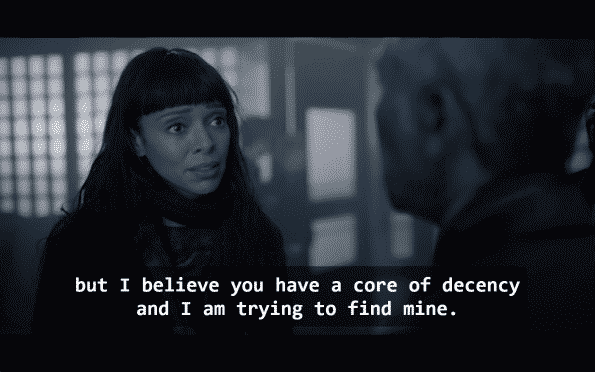 Did you think Ms. Prescott was going to get grounded and that be it? She has spent too much of her life holding secrets and working her way to becoming a Meth to just go down and stay down. Nope, she plans to use her media contacts and confess knowledge to some crimes. But, the first bit of information revealed is where Kristin in and that leads to Tanaka making his way to the Head in the Clouds.

As that happens, Kristin is getting to repeat over and over discovering her family being brutally murdered until Kovacs gets to finally take her out of VR. But, she learns this is only because Rei is trying to break Kovacs. Well, in her words, make him evolve. For in her mind, cutting things which make you weak is the key to power. An idea that does push you to wonder how is Kovacs even alive then? But, you know loopholes and exceptions are necessary for crazy people’s theories.

Someone who, despite being a bad ass for most of the show, seemingly got taken down a few levels, if not because of Kristin’s arms, she evens the odds. And while that happens, Kovacs and Rei eventually come to a point where fighting is the only thing which makes sense. He figures the only way for her to devolve back into a human being will be to put her offline for about a century and naturally, she doesn’t like this idea. Especially because it includes stripping her of her power and money. So as she prepares to eat him, because their relationship couldn’t get any weirder, they begin to fight. 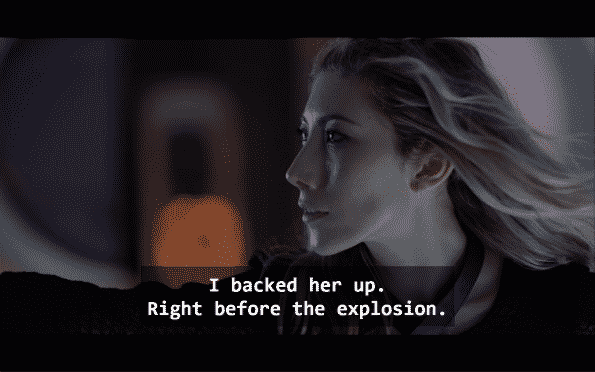 But, unlike the Kristin and Leung fight, which Kristin wins, there is a stalemate between Rei and Kovacs. Which isn’t necessarily a good thing for after Lezzie rescued her parents, she decided to destabilize the ship so now it is on the verge of losing altitude and crashing. And with this in mind, Rei drops the bomb that Quell’s stack has been backed up and only if Kovacs escapes with her will he ever know where it is. An idea which rocks him to his core but he can’t do it. Instead, he takes his sister out and decides to just die with her. Just end the whole thing.

Though, before the ship conveniently crashes into water, missing all the infrastructure it could have fell into, Quell is imagined again and she tells him a happy story. One which represents their love story but now with a happy ending. An ending that, surprisingly, doesn’t end with Kovacs death for he surprisingly survives. Well, his stack does. The sleeve is destroyed but stack intact. As for Rei, well if he was craddling her and his stack survived, I think it is safe to say she survived too. 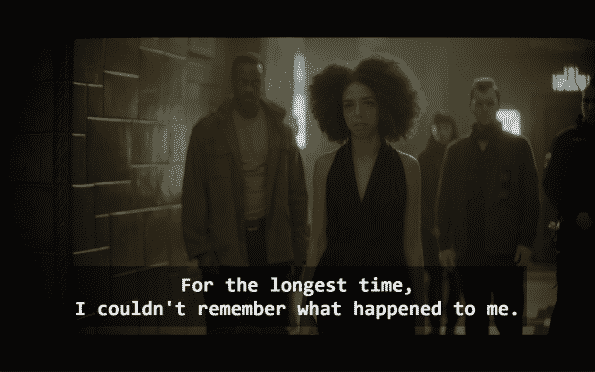 So, we know how and why Rei blackmailed Laurens, who killed him, and why she went through all the effort required to do so. What hasn’t been addressed at all though is Lizzie. How did she end up outside the “Jack It Off” club with her mind destroyed and her looking like a child missing her favorite teddy bear? Well, long story short, remember how Rei said Miriam owed her a favor, and that is how Laurens ended up with Stallion in his system? Well, the favor came about because Lizzie got pregnant and wanted to not only keep the baby, but tell Laurens.

Now, as seen, while married, and unlikely to divorce, their marriage isn’t the most loving. They don’t have sex anymore and while she isn’t a trophy wife, she isn’t a valued partner either. But, one thing she always did have was being the only one to bear Laurens’ children. This child stole that from her so she asked of Redi to melt her brain and force her to forget. However, she remembers now and with her trying to kill Lizzie, killing her baby, and Laurens’ crimes, whatever industry he controls he leaves to Isaac to manage. While apologizing for not doing so earlier.

As for Ms. Prescott? Well, despite all that happens with Laurens, no one issues her an apology. Heck, considering she hooked up Miriam with Rei, she doesn’t even get arrested. She just stands around to watch but neither Laurens nor Kovacs says a word to her really.

Leaving what is to come. Well, there can’t be two Kovacs and Ryker’s sleeve needs to be returned to him. So the show ends with Kovacs seemingly back to being Takeshi and off to find Quell’s stack.

“I don’t run away anymore, I run toward.”

It Leaves You So Excited For The Next Season

QUELL CAN BE SPUN UP AND REVIVED! Alongside that, with her being capable of coming back means that maybe her quest can be revived. Leading to the only issue, is there any genetic material for her to get a proper sleeve or will she just have to be like Lizzie and become a synth? Either way, the potential for every episode to feature Renée Elise Goldsberry is high as well as the return of Dichen Lachman. After all, the door is left open since there is no real mention of whether she survived.

Now, you can argue she did get shot straight in the neck so her stack could very well be destroyed. Yet, considering all the twist and turns Rei presented, would it really be that big of a surprise for her to be back once more? Who is to say she doesn’t have a clone out there somewhere that wasn’t being held at Psychasec?

How Do Cops and The Media Suddenly Have Power?

The media and cops for those whole show seemed like, when it came to Meths, they were powerless. The media was just one woman with a drone and the cops? Between Rei and Laurens, they got embarrassed, bought, and we had little reason to take them seriously at all. So how in the world did they suddenly get to have a last minute surge where they could take in Laurens and expose what happened is beyond me. Especially for a man so powerful he, at one time, had influence over the UN and was touted as the richest man in the settlements.

Leung Kind of Got Taken Out Rather Easily

The problem with being made out to be such a bad ass, so formidable, and so dangerous, especially if you aren’t a lead character, is that it makes when you do side eye worthy. Are you telling me this man’s only advantage was him surprising folk? Otherwise, could it be he wasn’t as dangerous as we thought he was?

So, That Ship Just So Happened To Be Nowhere Near The City?

Considering how huge that ship was, the fact it ever so conveniently landed in a lake and didn’t veer toward any building or that bridge was bogus.