Sadly, neither the Black experience during WWII Germany nor the odd love affair between a Nazi soldier and Black German girl flourish.

Leyna, a half Black and half German girl, is well aware she is an outsider. Yet, despite the treatment by her school pupils, the military, and even strangers, she loved her homeland. However, as the holocaust kicks into gear she finds herself worrying about her safety. Especially since a young man named Lutz, who at first seems to just lust for Leyna but eventually fell for her, adds to her dangers. For part of her allowed existence was being sterilized. However, her mother (who I wanna say is named) Martha got fake papers for her daughter so that the procedure would never have to be done. As for where her dad is? Gone, for he fought for the French during World War I.

But, despite knowing the rules she is breaking, and the dangers she’d face, Leyna continues to see Lutz, the son of a Nazi officer. She even sees him despite him being very pro fighting for Germany, which essentially means keeping Hitler in power. For she is a fool in love. Leading to the question: Will their love survive or end up getting one, if not both, killed? Especially considering it isn’t just his dad against their union, but an entire nation.

Taking note of the short June, which explored the Asian American experience during Jim Crow, what it was like to be Black in Nazi Germany is another experience known about but not heavily depicted. It’s one of those things which surely has a slew of literature in existence, maybe documentaries, but not a film. No dramatization to make the details more easily consumable yet still informative. Which is sort of the benefit of this movie.

Mind you, this film doesn’t necessarily deserve a pedestal for it doesn’t handle the subject matter in such a way like Asante’s past work, Belle. However, it does give a taste which is quite enticing. Particularly thanks to Stenberg’s performance which captures that all too familiar feeling of wanting to love the country, which is all you have known, yet feeling constantly rejected by it. It’s people reject your existence and ostracize you. The laws offer you no real protection to enforce and your government? They are unsure what to do beyond making sure you don’t procreate. An experience which Stenberg may not get to portray to the point of you thinking she needs an award, but she gets the point across.

Delving a bit further, it is very weird to listen and watch Lutz and Leyna love Germany despite the culture which has become German. Leyna loves her country, wants it to defend itself and win the war, but seemingly doesn’t take into account it winning the war means things being worse for her. Nor does she take into account her boyfriend, who wants to fight for Germany, wears a similar uniform as the men who kill discriminately and publicly. Such as when they shot a Jewish man in his genitals, after making him strip in the middle of the street, before shooting him in the head.

It makes the idea of absolute love and loyalty seem strange. Thus presenting a story which, as an American, you can again easily connect to our history. The desire to not see the civilization and culture you have known collapse, yet many aspects of said culture you finding hard to defend. Yet, with knowing it often is all or nothing, you find yourself picking all in hopes that, when the fight is over, during that time of feeling like one nation, the sins of the past maybe medicated so all can move forward in unity.

A Romance Amongst The Chaos 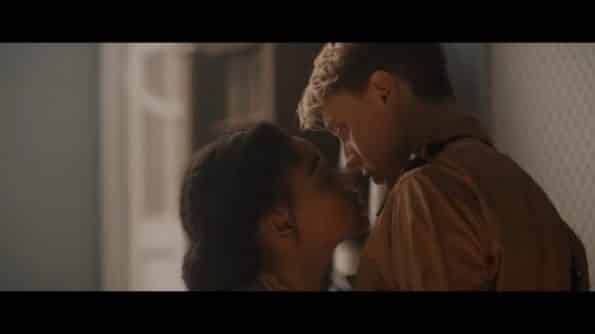 Stenberg has that kind of charm where, if you pair her with anyone who is at least decent, you’d think they are cute together. As is seen in this film. However, it is such a mountain to get over when it comes to Lutz essentially being a Nazi who may not agree with the killing of Jews, and people on general principle, yet that is what he is fighting for. He may say it is for pride and country, but his country is committing genocide and so him fighting for it is co-signing what they are doing and would continue to do if they won.

Making it very difficult to just let yourself enjoy this mixed race girl and German boy do their Romeo & Juliet act. For while their parents don’t want them together, one side is just a worried German mother and the other is a Nazi father who’d rather kill his son than let him touch, never mind lay, with a negro. It’s just something a bit too hard to get over.

The issue with Where Hands Touch is its inability to go into any subject matter as far as you may desire. It doesn’t give you the full experience of being a Black German person during World War II. The film doesn’t dive too deep into how complicated it would be to really have an interracial relationship back then. Nor do you feel the full weight of being a citizen of a country which despises the fact it can’t wipe you out with a snap. It relies heavily on you being able to connect the story presented to stories you know to bolster what it gives you.

Hence the mixed label. It does feel like the tone of the movie is made lighter to accommodate the romance and create a hopeful tone. Which feels almost like it is discrediting the fear of many a Black German person back then and their experiences. Making things worse is that you know there aren’t going to be more films presenting this perspective so this being it is kind of disheartening.

But, while it doesn’t hit a home run, Asante’s script and Stenberg’s acting give you just enough to where you may still feel cheated, but it may push you to follow up on your own.

It does feel like the tone of the movie is made lighter to accommodate the romance and create a hopeful tone. Which feels almost like it is discrediting the fear of many a Black German person back then and their experiences. Making things worse is that you know there aren’t going to be more films presenting this perspective so this being it is kind of disheartening. But, while it doesn’t hit a home run, Asante’s script and Stenberg’s acting give you just enough to where you may still feel cheated, but it may push you to follow up on your own.