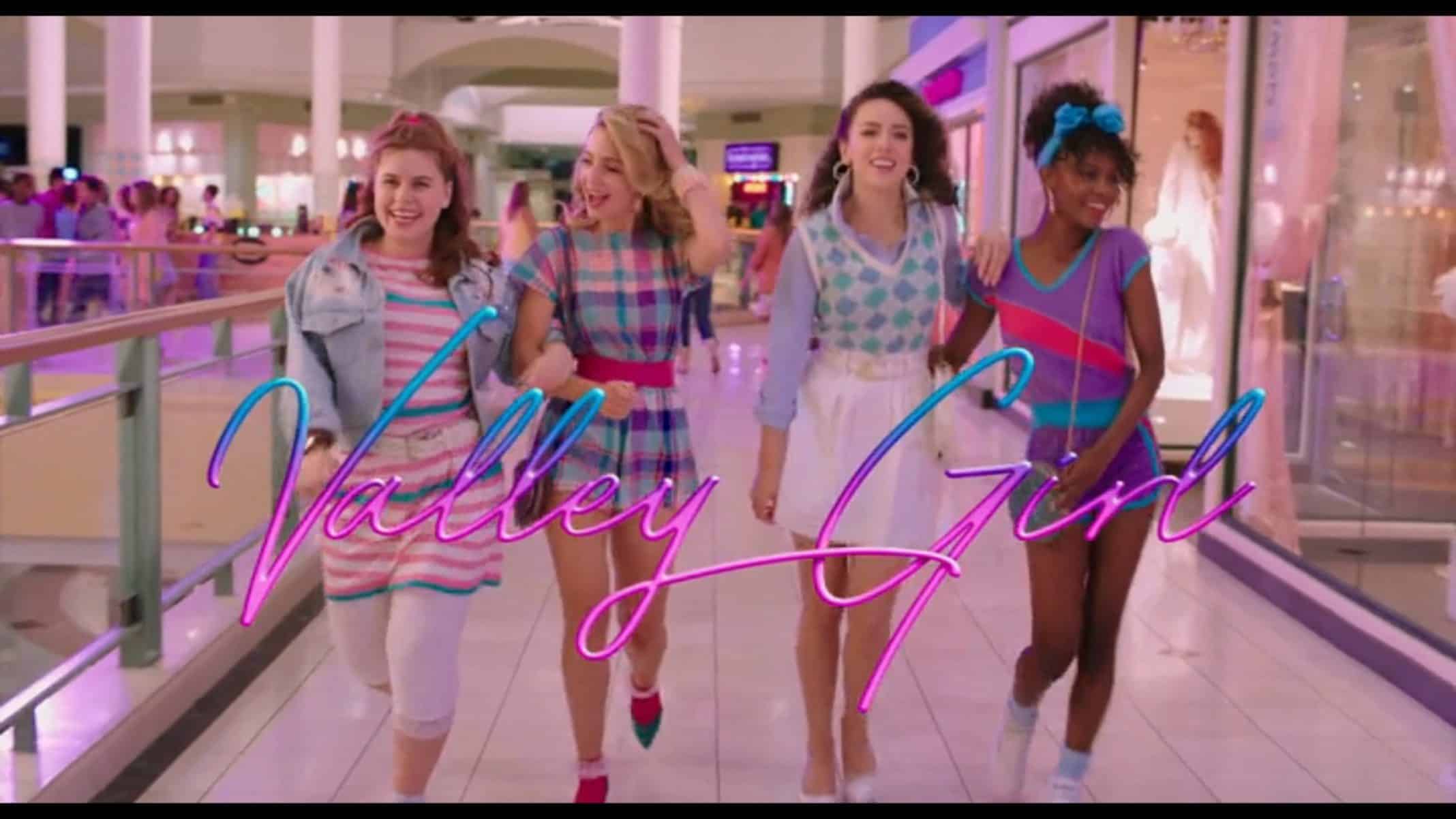 “Valley Girl” is a fun teen movie with 80s flair, music, and a simple, but likable, romance – ruined by bland characters.

A fashion designer when she was younger, who made it into a career, Julie grew up in the valley and was quite happy about it. However, with a creative mind came the desire for adventure and new experiences. Leading her to find Randy alluring enough to be an excuse to leave her old life behind.

Abandoned by his parents, but found a new family in Jack and Sticky, the boy from the wrong side of the hill ends up being just the right guy for Julie.

The outcast of Julie’s friend group who is teased, ignored when she wishes to talk about her parents’ divorce, and slightly struggles under Karen’s attempt to be the leader of their group.

The one who claims to have saved Julie and the rest from their former lives, who struggles to maintain the image she set forth for them. Which isn’t to imply she deals with body issues, the film doesn’t go that deep, it is more so in maintaining, or becoming, the material girl she wants to be.

Randy’s bandmate, also co-writer, who is like a sister to him. Also, she is out, proud, and will fight anyone who gives her s*** about it.

A weird dude we don’t know much about beyond his love for playing the drums.

Julie’s daughter who, like her mom in the 80s, is at a crossroad in her life.

Julie, back in the 80s, was a Valley Girl who didn’t necessarily love as much as she settled for the life she had. What was easy and expected she accepted, even as dreams played in the back of her mind. But, unlike some of her friends and mother, she didn’t let her curiosity die on the vine. So when Randy, a boy from the other side of the hill, comes into her life, she sees how the other half lives.

Sadly though, problems arise as she tries to integrate him into her life, and he comes to believe they may not work out. Leaving you to wonder, could Julie go back to the way things were or has what Randy exposed her to changed her forever?

While our knowledge of Rothe’s work remains a bit limited, she is the hook when it comes to this movie. She is what makes you fall in love with the idea of her being with Randy, who comes off as a generic misunderstood bad boy, and gives the film some kind of life. I’d even say “Valley Girls” makes you hope, with “Happy Death Day” raising her profile, maybe her next film can get a theatrical release. I mean, at this point, the girl has proven herself a star able to make an odd, possibly obscure, film a potential hit.

But, if Rothe doesn’t do it for you, a walk down memory lane and the 80s songs, covers, not the originals, in some cases, could be your thing. For while not full out musical numbers, they do operate in a similar vein and, early on in the movie, are one of its top-selling points.

Whether we’re talking about Julie’s friends, parents, or even Randy’s friends, you are just left with so many characters who feel underutilized and underdeveloped. Granted, even Randy, who we learn a little about, feels barely fleshed out. But, you can see “Valley Girl” wanted to keep things light, in every which way possible, so to dive into how Julie’s friend Stacey is dealing with her parents’ divorce, it would have been too heavy. Never mind learning Karen’s background, how Randy’s friend, Jack, was handling being a lesbian in the 80s, or even what was up with Jack and Randy’s friend Sticky. What was his story is something to wonder, but, like most characters, you’re left to fill in the blanks.

“Valley Girl,” which we got off Amazon for a little over $7, and that’s the rental price, is the type of film that leads you to hope it ends up on a streaming service. For while we can’t say it is worth the price we paid, it is something that could entertain some people out there. Rothe, as usual, uses her star power to make up for the film’s flaws and keeps you entertained until the very end.

But, with “Valley Girl” being a bit vapid with the blandest characters, if the music or Rothe don’t hook you, this may feel insufferable.

In the end, Julie chooses Randy. Someone who she is with through her college years, and a little bit after, but he doesn’t end up modern-day Julie’s father. Instead, he lives the Rockstar life, and Julie speaks happy stories of him to her daughter, Ruby.

Considering the movie does an epilogue, telling us what happened to everyone, it pretty much makes it clear that there is no desire to make a sequel – and we can’t blame them.

with “Valley Girl” being a bit vapid with the blandest characters, if the music or Rothe don’t hook you, this may feel insufferable.