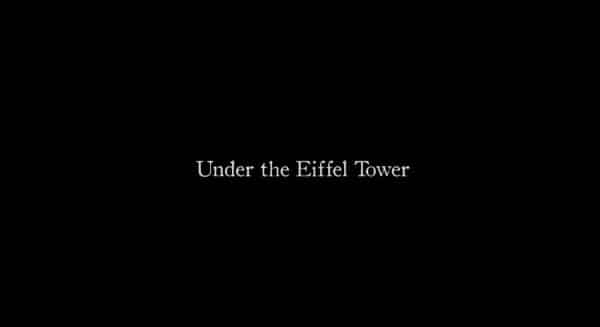 Under the Eiffel Tower has the chemistry needed to become invested in the needs, but the story presents too many obstacles just to enjoy two people falling in love.

After losing his job, Stuart takes up his friend’s, Frank, offer to join his family in Paris. Which leads to Stuart making an ass of himself, with Frank’s 26-year-old daughter Rosalind, and Frank’s wife Tillie basically telling Stuart to get lost. Leading to Stuart coming across Liam. Someone who seems friendly, if a bit strange, but with Frank being a Kentucky man alone in France, a Scottish person who speaks English is better than nothing. Especially since Liam has the gift of gab and introduces them to Louise. Someone who owns a winery, and chateau, they get to crash in after Stuart shows himself useful in multiple ways.

However, problems arise as it becomes clear multiple men will compete for Louise’s affections and combine that with Stuart’s recent past haunting him, it makes you wonder if this American in Paris can end the trip on a good note?

While Louise isn’t as open as she should be to her suitors, there is a charm there that is undeniable. The kind which allures you the same way Louise and Stuart talk about alcohol. Making it where you forgive her, even as you learn the whole truth and then when it comes to Stuart? After his strange, out-there action under the Eiffel Tower, you may think it is time to stop watching this movie and move on.

However, even though Stuart is painted to be seen as pathetic, he doesn’t really live up to that adjective. There is something normal, average, about Walsh’s performance that makes Stuart seem like someone who was on autopilot, like so many of us, but he got caught, called out, and fired over it. So as weird as his action towards Rosalind was, proposing to her, as time goes on, just as much as Godrèche’s performance helps you gloss over a major flaw, Walsh takes what could have been a difficult character to watch and invest in and make him palatable.

Here is my thing, we aren’t necessarily told how long Frank and Stuart have been friends, but the idea of someone proposing to their friend’s daughter is beyond creepy. Take note, he could have known her when she was a teenager, or it could be seen he was using Frank to get to his daughter. Someone who just got a Ph.D. and guess who is the only one who read her thesis? Stuart.

So it brings on this predatory vibe that isn’t helped with Stuart and Liam following Louise, and pushing her to spend time with them and even house them.

If Stuart’s journey didn’t get clipped at the knees with the Rosalind thing, and then fought to recover since that point, this could have been a better movie. However, recovering from that situation, it took a while, and though Godrèche helps, there is only so much she can do for her situation may make you feel uneasy. Hence the mixed label for while you’ll enjoy this movie, you may find yourself pointing out how this or that could be better to the point you may get consumed on that thought process.

Under the Eiffel Tower Ending Explained

After somehow beating out Liam, a grifter, for Louise’s affection, and even getting to sleep with her, despite her being married to Gerard, what lingers over Stuart’s head is Sharron. Not an ex-girlfriend or wife, but ex-boss. Someone who he tries to convince to allow him to manage Louise and Gerard selling their vineyard and after Gerard dies, he does.

However, in getting the sale, he loses the girl, and while Liam is alive and well, he is a grifter, so he foolishly leaves before Louise gets any money. But, to prove he wasn’t using her or taking advantage, Stuart notes he left his job for Louise and while a dumb decision, it is a romantic one. Not to say Louise gets back with him, that isn’t said or confirmed. Although, she does smile at his gesture of throwing away the box for the ring he used to propose to Rosalind.

We could see Stuart’s life after the sale, dating Louise, and maybe them starting their lives together but who would want that? While things don’t end with a pretty bow, they end in a fairly good place.

If Stuart’s journey didn’t get clipped at the knees with the Rosalind thing, and then fought to recover since that point, this could have been a better movie. However, recovering from that situation, it took a while, and though Godrèche helps, there is only so much she can do for her situation may make you feel uneasy. Hence the mixed label for while you’ll enjoy this movie, you may find yourself pointing out how this or that could be better to the point you may get consumed on that thought process.