The Tale – Recap/ Review (with Spoilers)

Disturbing yet weirdly artsy, The Tale questions and prods the past as Jennifer Fox comes to term with a less rosey version of her history.

It was 1973 when Jennifer met Mrs. Jane G and her friend Bill at the age of 13. Mrs. G ran a stable, an equestrian camp, and Bill was a track coach. Together, alongside a few other girls, Jenny spent most of the summer with Mrs. G and Bill and quite enjoyed herself. However, after some time, things went left. Mrs. G and Bill decided, despite Jenny’s age, to treat her like an adult. Something which began with simply talking about them having an affair but evolved into something sexual.

Which, decades down the line, with Jenny now 48, doesn’t frame the same way everyone else does. What she had with Bill, who she repeatedly had sex with, she called a relationship. In all of the minds who hear the story though, from mother Nadine to fiancé Martin, it was rape. Leading her down this road, after her mother discovers and sends this story from when she was 13, to try to understand the truth of the matter.

For while a documentarian, used to finagling the truth out of people, what Jennifer never got was the truth out of herself. Leading us to a journey of self-discovery which might be familiar to some, but makes it no less disturbing. For at 48, Jennifer is coming to the realization that Mrs. G and Bill perhaps weren’t shining adults who perhaps were positive influences on her during a vulnerable time. They were manipulators who, for no verbalized rhyme or reason, preyed on her.

I don’t even remember how I got here or who I used to be.

Without guts, talent is wasted.

I only remember them. Why can’t I remember myself?

With adult Jennifer interrogating her younger self, as well as the younger Mrs. G, there was an almost Alias Grace, or Margaret Atwood

in general, vibe in effect. Especially since Jennifer seemed to have issues remembering the age she was during events, Mrs. G sometimes seemed genuinely unable to remember what Jennifer was talking about, and while Nadine, Jennifer’s mom, saw and felt a bunch of red flags, nothing was ever said. Also, it was hard for Jennifer to find a witness.

And, taking note this is a real person’s story, this isn’t to say I don’t believe something happened or not. More so, the way it is presented leads you to realize how much the mind protects itself from trauma. For just the way Jennifer framed it in her mind was that, at 13, she had a real relationship with a 40-year-old man and partly justified it with, “It was the 70s.” Which is crazy to listen to but when you see how casually she says this, even when confronted with the idea she was manipulated, it opens your eyes a bit.

Especially as you watch the young Jennifer for even though she breaks things off, while she was in some honeymoon phase because of all the attention, you see her hold onto that twisted idea. To the point, when Jennifer questions her memories, her younger self argues with her older self. Even gets upset with her for questioning things. 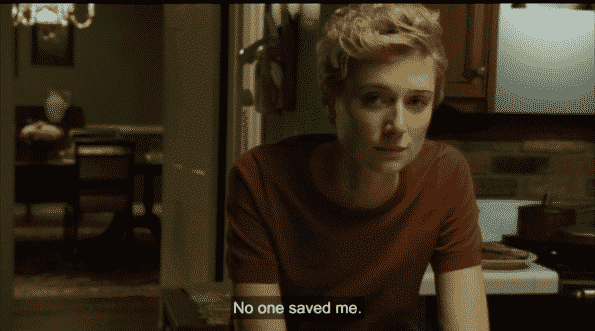 And if I could go a bit further with the questioning things, I honestly thought that was the most interesting part of the movie. Especially Jennifer speaking to her younger self or Mrs. G. For in that process, we saw Jennifer administer therapy on herself and go beyond just dealing with her stuff, but also recognize Mrs. G’s in the process. Why she allowed what happened with Jennifer to happen and may have even been the recruiter for Bill’s sickness. Thus fleshing out that character more and more and making it where, when we saw the older versions of the two interact, the uncomfortableness you understood more and more as the movie went along.

Though not a large part of the movie, there was something very entertaining about Jennifer as an instructor. Especially the exercises when she used her students to search for lies and to analyze them. It honestly made me wish more shows which are set in colleges would focus more on the classroom than personal drama to see moments like this.

When it comes to pedophiles and those who enable them, we imagine monsters. People who look disturbed and as if they have red flags shooting out of their heads. We don’t see them as charming and inviting people. Which makes Mrs. G and Bill even more disturbing.

Yet, there comes the issue of the narrator feeling slightly unreliable. For, at least the way I took it, with Jennifer noting she never had a story to tell before, so brings you to question everything which comes after. That line, amongst other instances in the “Highlights” section, could lead one to question what is the truth and it makes where the noting that this is Jennifer Fox’s personal experience the one thing which validates the whole movie. For take that one title screen away and this film genuinely would be something along the lines of a Margaret Atwood novel.

Like with Liar, there is a discomfort in watching this and talking about it. Because of how things are presented, it makes you want to walk on eggshells because we’re not only talking about rape but that of a child. Add in it is someone’s personal story not told in a straightforward, “They did this, they allowed this, and they didn’t do anything” and it makes things increasingly complicated. Not to mention, this push to not be seen as a victim and use the word “relationship,” in terms of a 13-year-old being intimate with a 40 year old man, and it makes it so just approaching talking about the subject, outside of the performances and writing, and really talking about what happened is immensely difficult.

Yet, that challenge to the brain is why this is being labeled positive. Many productions feature rape, inappropriate relationships and taboo subjects with similar narratives – fiction or not. However, The Tale, especially with is being based on Jennifer Fox’s real life, and her not just being an executive producer but the writer and director, it brings things to a whole new level. Particularly since it doesn’t follow the same path films which deal with the subject matter does. Thus it challenges you in ways which are uncomfortable and really pushes you into the mindset that maybe Jennifer once was in before she came to the realization what her relationship with “Bill” really was.

And that ability for the writing and actors to screw with your mind is why this is labeled positive.