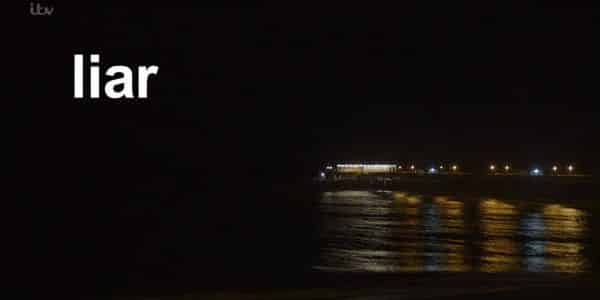 While Liar starts off strong, as characters make ridiculous decisions and the truth gets revealed too early, it flounders.

After recently divorcing her childhood friend Tom (Warren Brown), Laura (Joanne Froggatt) goes on a date with this man named Andrew (Ioan Gruffudd). He is someone Laura is familiar with since she is Andrew’s son, Luke’s (Jamie Flatters), teacher. Also, Andrew is also known to Laura’s sister Katy (Zoë Tapper) since they work in the hospital together. In fact, Katy is the one who pushes for the two to go on a date. Once which utterly changes Laura’s life.

Leading us on a really 3 episode journey to figure out what happened the night Andrew and Laura slept together. One which, from episode 4 on, becomes utter madness. Especially after we learn the truth in episode 3.

It Started Off So Well 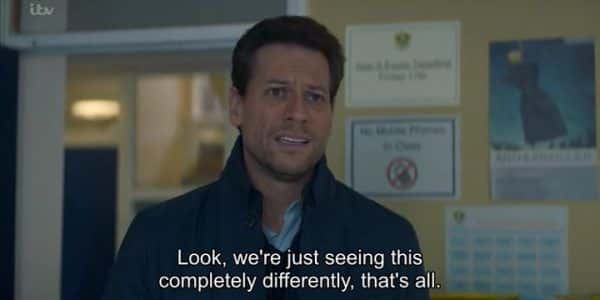 Rape and consent have been huge topics. Especially consent when a person is intoxicated, much less them rescinding their consent while in the process of having sex or leading up to it. So with how we are introduced to Andrew and Laura having sexual relations, and her not remembering it, so brings the question of what do you, the viewer, perceive as rape?

Something that sort of led me to walk a bit of a tightrope in the reviews. For we are only given the details course by course and we are given such room for doubt that it complicates things. Especially since Andrew seems like such a nice guy and we are pushed to play into the idea that only creeps rape women. Yet, at the same time, being that Froggatt has experience playing a character like this, in Downton Abbey, she makes it so even with no bruises, marks, or signs on her genitals there was a rape, you don’t easily give into the idea she is lying.

In fact, there is enough room left for doubt that you are almost led to question if maybe, after Andrew left, maybe someone else raped her.

The Truth Is Revealed Too Early

I put spoilers in the title so let me be clear with you: Andrew is a rapist. In episode 3, it becomes a bit murky if he got to rape Laura or else her memory lapse is due to drinking, but he does rape detective Harmon (Shelley Conn) – in episode 4. We are made fully aware of that. Which, leads to a bit of a problem. The rest of the season deals with nailing Andrew for what he did. Leading to some social commentary on how ridiculously difficult it is to get a prosecutor to take a murder case, much less win. Yet, at the same time, once the truth is revealed so goes the most interesting aspect of the story.

For really, one of the main issues you may have is Laura consistently getting in her own way by playing detective. Much less, her repeatedly answering her phone to strangers or even with Andrew calls. Making you wonder, for someone who is a teacher, how has she not developed common sense? Why would she do, of all things, post about how Andrew raped her on social media? Before the case even closed!

Which, in a way, you’d think would make this topic something at least worth being On The Fence about, the idea of how rape survivors cope. However, there is a certain soap opera, over the top, vibe which takes away from what Froggatt is trying to get across. Especially as you add in what her sister is doing.

Everything Dealing with Katy

Katy is having an affair with Tom. A relationship you are given really no reason to give a damn about. For one, no one cares about Tom. Him being a cop, a former cop by the end of the season, doesn’t do much for the show. Katy having a storyline outside of helping her sister and being a wife and mom, does nothing for the show. Those two just have the kind of drama that a six-episode season could have done without.

I’d even throw Detective Harmon’s life being featured too for while I liked her and her partner, there was just not enough time to put in so we really had reason to get into their lives.

With how early in the season it was revealed Andrew was a rapist, him getting a swift comeuppance, in the end, left me with mixed feelings. If only because now there seemingly will be a season 2 which will focus on who killed Andrew. Though, perhaps what really got to me is Mia (Ivana Basic) just letting Laura into Andrew’s mother’s house (I believe that was his mum). Especially after hearing her name and that not setting off any major red flags.

I mean, Laura, throughout the series, when playing detective, doesn’t lie about her name at all. So between her snooping about, letting it be known she is after Andrew, and I’m sure him venting about it, the fact Mia let Laura into the house, into the shack where all the evidence was, and didn’t check with Andrew, “Who this woman?” makes me want to rip the hair out which remains on my head. For it just made for the kind of moment that only shows quickly trying to wrap things up would do.

Liar starts off so well that it becomes such a huge disappointment during the second half of the season. It wipes away all the desires to make theories and replaces it with Gruffudd playing a smug villain. Something he does do well but not enough to really carry the show well into its final episodes. Especially as Laura does one inane thing after another. The type of stuff you want to forgive her for because she was raped, and is trying to get closure, but there comes a point where her vigilante justice just becomes too much.

Hence the Mixed label for as Andrew is revealed to be a serial rapist, the show goes downhill – fast. Making me almost question if it is worth checking out the second season for with it featuring the three-week gap Andrew disappeared, among other things, I’m unsure if that is worth looking into. Heck, even Ioan Gruffudd figured this was, probably should have been, a one season show. As noted in the article referencing a possible season 2 below.

The linked article from Mirror notes the creators are working on a season 2 but doesn’t say ITV picked it up. Though, it seems likely. After all, like Alias Grace, Downton Abbey, Humans, and others, this is a cross Atlantic shared production. Meaning, it should have the finances needed for a second season to be produced.

According to Radio Times, ITV has commissioned a second season of Liar which will also be its final season.

Liar plays on the stigma, prejudice, and assumptions surrounding rape. Of which, it does so in a way which forces the viewer to confront their own bias.

Liar has to be one of the few shows which has me really second guessing what I think, what I should write, and I both love it and hate it for that.

Liar exemplifies the reason I love mini-series. They cut the nonsense, don’t add extra bits to uncover in later seasons, and get to the point. Though, even with being relatively to the point still comes confusion.

With the reveal to us of who Andrew really is, Laura does her damndest to mount the kind of evidence required to make her battle more than his words against hers.

Once again, Laura taking things into her own hands messes up any sort of closure she could possibly have.

Just in case you thought Liar would be one season, we get set up with a whodunit cliffhanger. One which implies season 2 will focus a new, but familiar, liar.