Wherever I Look
Recaps, Reviews, and So Much More
Home Movies The Broken Hearts Gallery (2020) – Review/Summary (with Spoilers)
Movies

While it does follow the usual romantic comedy conventions, between Viswanathan as lead, and the multiple scene-stealing supporting cast, you’ll love The Broken Hearts Gallery.

26-year-old Lucy is living the dream! She lives in New York with her best friends, Amanda and Nadine, who she has known for over 8 years, and has her dream job working for a woman named Eva Woolf, who gave Basquiat one of his first gallery openings. But then it all goes to s***.

Why? Well, she never DTR’d what was going on with a co-worker, saw him with someone just after Eva gave her an opportunity to make a name for herself, and she blows it. She blows the introduction, loses her job, and if it wasn’t for the fact her friends are incredibly kind, and can afford it, her New York dream could have been over.

Alas, she is young, rather optimistic, and someone who loves love, even if she lives in a state of worry it can be over, she forgotten, and being tasked with keeping the memories alive. Which is why you’d think meeting the pessimistic Nick on the worst night of her life, and again almost a month later, would lead her to think maybe she needs to change her life?

WRONG! Well, partly wrong. It is through Nick she does change the way she lives her life, but not with any less spark than before. More so, through knowing Nick, befriending him, partnering up with him, and truly getting to know him, she grows in ways she seemingly hasn’t in years. Leaving you to wonder if he too is at the point where he is ready for love or if there is growth he has to get done and Lucy may not be part of it? 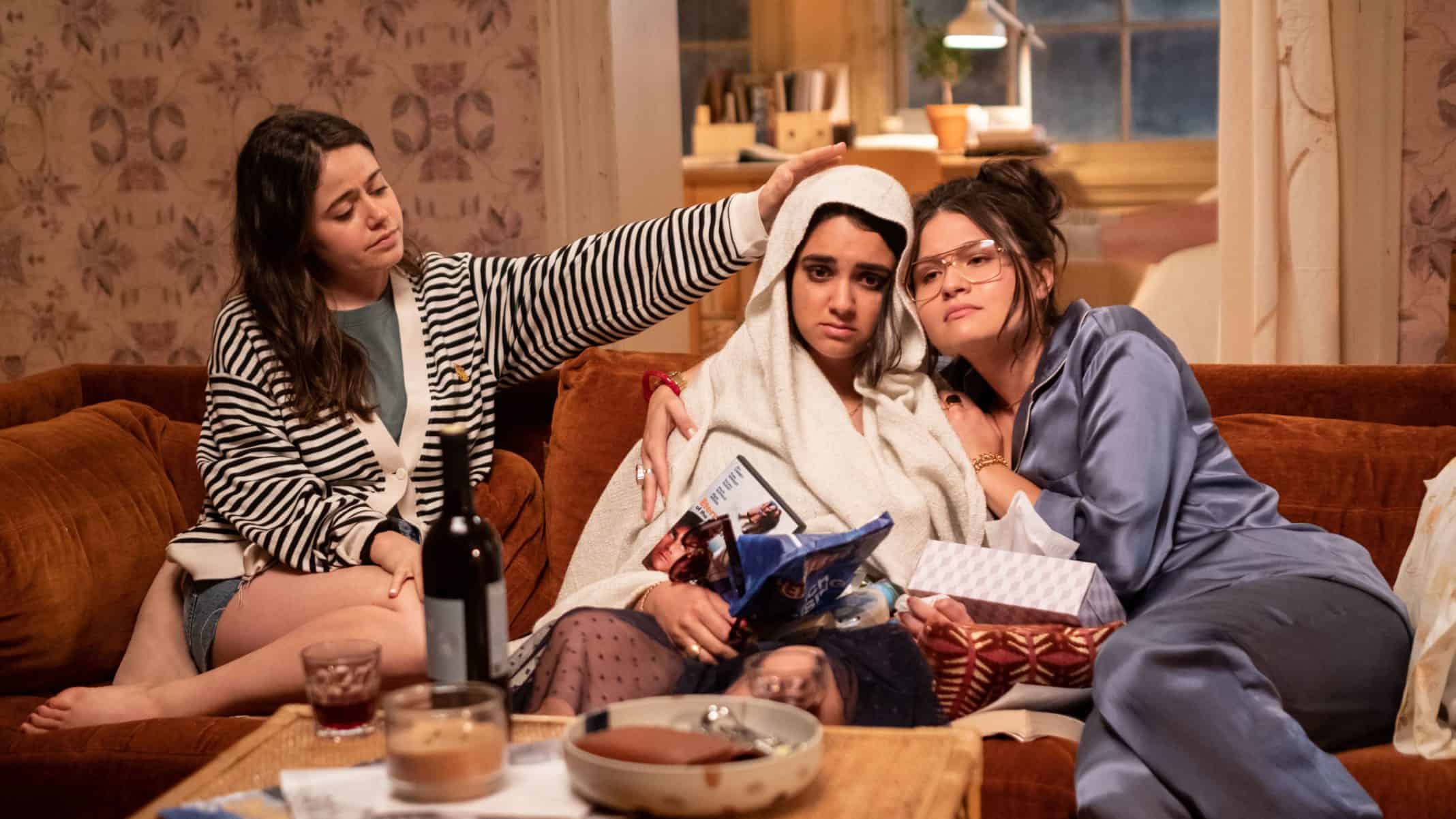 Inspired by her mother’s work as an art teacher, Lucy fell in love with the story pieces could tell, and it made her want to open up her own gallery someday. So, with that in mind, where better to be than New York to find and showcase stories, especially after working with the legendary Eva Woolf?

Dark humor is Amanda’s love language, and while she may come off callous, it’s really just her inner lawyer. Oh, did we mention she is becoming one? Hence Amanda preferring to get to the point and presenting the facts. Including how she could murder someone and get away with it.

When it comes to Nadine, while she is maternal and loving towards Lucy, she is also a notorious heartbreaker. Especially when it comes to Russian girls, who are her preference. If not who she mainly meets when she books jobs for modeling.

Lucy’s mentor who tries her best to be understanding with Lucy, but she also recognizes Lucy is young and may need a bit more time and patience than she thought.

Nick is someone new to the hospitality business, and while his grandmother’s money got him started, after years of trying to turn an old YMCA into an elegant hotel, he hasn’t opened yet and is running out of money. Which is why Lucy becomes a bit of a bright spot in a rather dark time.

Amanda’s boyfriend who barely talks throughout the film, and usually has his headphones on and is keenly focused on his phone. Leading to people, comically, speaking for him.

Nick’s best friend, who is a husband, soon to be father and has been trying to help Nick fix and get things ready for a while now, but with him needing money, he finds himself unable to continue to work for free. Even if Nick is in the running to be his kid’s godfather.

Let me say this, is Viswanathan the funniest character in this movie? Nope. However, it seems her role as lead is executed in being the tie that binds. She can connect you to someone like Nick and Marcos, just as much as Amanda and Nadine, as well as Eva. For just as much as people are drawn to Lucy to be vulnerable, open, and give away what might be one of their most tightly held possessions, you want to give yourself onto Viswanathan.

To put it a different way, the way she plays Lucy and how her charisma works is like someone you trust taking you by the hand and leading you into a new experience. Which, even if hesitant at first, their enthusiasm rubs off on you so you can’t help to eventually mimic and be in the same mood as they are. Hence why you find yourself falling for whoever Lucy adores and being disappointed or outright hating, whoever wrongs her.

Viswanathan pretty much makes Lucy into that best friend who you stay in contact with through social media, but when they say “Hey, let’s hang out,” you actually end up doing so and want to be the one who says that rather than wait for them to make the first move.

Most Of The Supporting Cast Are Scene Stealers

From Amanda being like a modern-day Wednesday Adams to her boyfriend Jeff not saying a word till nearly the end of the movie, multiple characters get at least one moment. And what makes The Broken Hearts Gallery different is a character having a moment isn’t always something comedic. Two examples of more serious-ish moments come from Nadine showing how she breaks up with people to Eva talking about how and why she started her gallery. Heck, Marcos, Nick’s friend, with Nick being such a square, Castro effortlessly eclipses him, and as you see Marcos and Lucy joke around together, it almost makes you ship them.

Mind you, it is made clear early, and repeatedly, he has a wife, and she is pregnant, to keep you from ever getting invested in the idea. However, you have to admire that these characters are both allowed their moment in the sun and playoff Lucy so well that it makes the movie fly right on by.

The Building To The End Is A Wonderful Journey

With that said, what does slow the film down is when Nick and Lucy begin to leave the friend zone. Yet, while this slows things down, and may even annoy you, it never gets so bad you feel like flipping a proverbial table and just wishing Lucy would be single, even if she seems like a serial monogamous – lowkey.

Rather, it makes you appreciate the journey and the recognition they are both people with baggage, and you can’t always move on in a snap. Never mind, it isn’t always just your ex that plays a role in your specific brand of crazy. There are other factors that need to be respected and noted.

The Way It Handles Inclusion, For The Most Part

While the film does throw around terms and lingo, which makes you roll your eyes early on, that’s only in the beginning. Once Amanda and Nadine show they aren’t like other girls, they’re liberal, it becomes less preachy and more natural. It shows queer characters without making it a big deal. Then for characters who aren’t white, it’s made clear they are people of color, and it wasn’t just “color-blind casting.” Leading to, by the end, The Broken Hearts Gallery finding its groove and presenting how modern productions should handle the diversity of cities like New York.

Admittedly, the film is very predictable. Lucy has a situation in her life which complicates love for her, and another that nearly ends things with Nick. Also, Nick has unresolved issues that almost derail things with Lucy. However, someone calling the other stupid and a grand gesture patches things up. Thus reminding you that, when it comes to romantic comedies, people still operate on “If it isn’t broke, don’t fix it,” and I’d add “don’t try to improve it much either – besides some diversity and inclusivity.”

Nick Is Kind Of Dull

It almost feels silly to expect the male lead, especially in a production focused on the female lead, to not be a bore. But, to be fair to Nick, between the eccentric personalities and jokes written for others, he didn’t stand a chance. However, sometimes it feels like there wasn’t much effort put into Nick. Rather, he was supposed to be old school, a guy good with his hands, doesn’t like talking about his feelings, and the mystery and hidden pain is why he’s hot.

Thing is, that’s boring now. Which is why hearing about Marcos’ wife was a necessary evil for with how he and Lucy connect, it makes you want them together so bad. For while Nick is nice, plays piano, and owns a friggin building, the film really does need most of the movie for you to grow to like him and Lucy potentially being together.

Which for us is weird, since we are so used to the idea of sparks flying and you shipping them and only them, but there is a sense of realness that the guy you’d think she’d be better with isn’t available. It’s just bad timing, and yet, who is available isn’t terrible. In fact, he might be perfect for her, just not in your eyes.

While Nick is a bore, and the story may feel slightly predictable, overall, The Broken Hearts Gallery is a quality romantic comedy to head out and see. It features multiple supporting characters who get a chance to shine, Viswanathan as lead is an undeniably perfect choice, and even for something tap-dancing towards two hours, it rarely feels long, and you might wish for more. 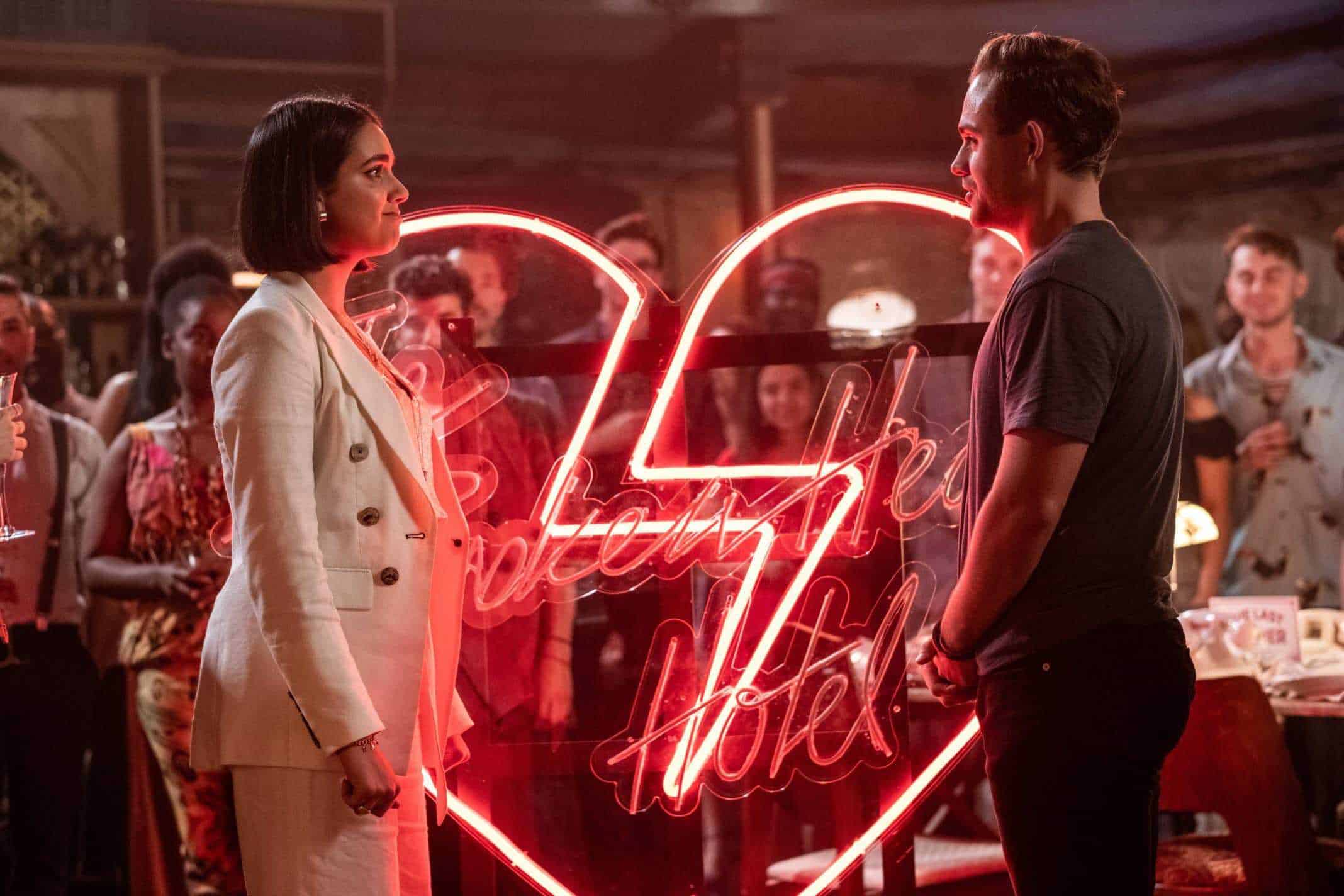 As you should expect, Nick and Lucy end up together in the end. However, with learning Nick named his hotel after his ex, despite him badgering her about keeping momentos, it wasn’t looking good there. Add in she invested in the hotel, with the money Eva was going to give her, and you can see why Lucy was pissed. Add in she let him meet her mom, who has Alzheimer’s to the point of needing to be in a home so she can have proper care, and it makes the sudden reveal probably one of her biggest heartbreaks.

After all, while she liked, maybe she said she loved the other guys, it isn’t clear how far the relationships went. Whether she ever lived with them or, in preparation for her forgetting them, she was more worried about stacking up memories than really being in the relationship. So with Nick, who was a friend first, then evolved into a boyfriend, like literal having sex then defining the relationship, learning about Chloe, meeting her even, that nearly ended it all.

However, between Amanda and Nadine, as well as Marcos telling Nick what Lucy did, Nick presents the grand gesture of renaming the hotel. Something he was going to do anyway, but the risk of losing Lucy pushed him to reveal things quicker – with a neon sign. Then, to make this an even grander gesture, he announces that and that he loves her at the gallery opening. Thus presenting a noted awkward situation for her, but luckily the feelings are reciprocated, and Nick is forgiven.

There isn’t a built-in sequel.

Most Of The Supporting Cast Are Scene Stealers - 87%

The Building To The End Is A Wonderful Journey - 85%

The Way It Handles Inclusion, For The Most Part - 83%