Wherever I Look
Recaps, Reviews, and So Much More
Home Movies Slice – Recap/ Review (with Spoilers)
Movies

I’m doing my best to just see Slice as a campy comedy, but even with that in mind – I struggle to find a means to spin this into a positive light.

It all begins with the death of Sean. He was a human boy just delivering pizzas, only 24 years old. A drug dealer of some kind, yes, but did he deserve to get his throat cut? No, according to his girlfriend Astrid who investigates his murder. Especially since Detective Marsh seems to have a hard-on for this actual werewolf, not a nickname or joke, named Dax. Why? Well, because his drunk daddy accidentally got hit by a werewolf driving.

But, with Sean’s murder being followed by Scooter, so does the interest peak for a local reporter named Sadie. One who starts piecing together the murders at Jack’s pizza shop, the Chinese food store before it, and pieces together the true killers: Witches.

“Is it the Lord working in mysterious ways or is it the devil working in obvious ones?”
Tracy

The Makeup & Special Effects Were Decent 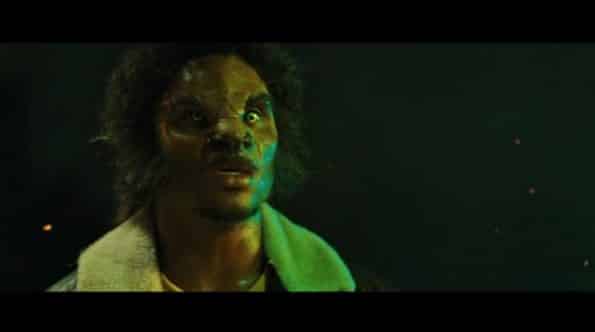 Towards the end of the movie we see Change as a werewolf and change back into a human which looked kind of cool honestly. It gave me Michael Jackson Thriller vibes a little bit. Also, the witches’ magic, while by no means awe-inspiring, it was good enough. Better than expected considering the look of zombies, including clear signs of how they died.

This Movie Is Not Rated E For Everyone

To a certain point, I can appreciate what was given here. It’s low budget horror movie which, I so dearly hope, didn’t want to take itself seriously. Hence the bad acting, the kind of script which may have only been financed thanks to Chance Bennett (Chance the Rapper) and Zazie Beetz.

But, while those names might be a hook, I can’t say you’ll stay on the line. Primarily because, while I must admit I sort of liked how Dax didn’t want to be a hero nor villain, despite being a werewolf, they didn’t develop that further. Also, while Astrid’s mission to get vengeance for Sean was okay, again, it wasn’t developed to the point you are behind Astrid getting revenge. What you’re about is seeing Zazie Beetz on screen even if it is in a movie like this.

As for the rest of the cast? It’s filled with comedians who all seem to vie to be the next Eugene Levy. Meaning, yes, they do consistently work as a comedic actor. However, they are rarely in anything which actually is a quality movie. Pretty much each job is just about keeping the bills paid, not proving themselves as a talented actor who deserves better.

Vera (Marilyn Dodds Frank): Are you talking mess about me?

on Amazon is around $6 (depending on taxes), which isn’t a lot of money, and yet I kind of want my money back. In fact, this is the type of film which should be part of a package you already pay for like Amazon Prime, Netflix, or something similar to justify having seen this. For while not absolutely horrible, I’m sure some may find comedic value in this, the best thing it has to offer is seeing Chance the Rapper’s acting debut, Zazie Beetz in a starring role, and some Thriller

Outside of that, calling Slice “camp” would be stretching that word a bit too far. Since the main purpose of that word is to say, something is so bad it is good for it tries too hard to be dramatic or funny. Slice really doesn’t do either. It’s is a completed film, I will give it that, but there are many reasons you can gather why a film done in 2016 is just now seeing the light of day.

Hence the negative label. For as much as I would love to do my usual, yeah it is mostly trash, but here is this bright spot that makes up for that, Slice doesn’t give me the ability to tip the scale. For some interesting makeup and a few special effects doesn’t make up for what feels like a movie by a YouTuber.  One who just wanted to say, through blood, sweat, and repeating people to like, comment, and subscribe, they got to complete a movie.

One that doesn’t take this accused werewolf storyline anywhere, whether you talk about Dax not wanting to be a hero or villain or Marsh’s hunt for him. It doesn’t boost Sean up as a love interest so that you care about Astrid’s journey vs. seeing Beetz in a starring role. Then, in terms of trying to be camp, it only succeeds in that by having a weak script paired with actors who need a good script so that they don’t flail on screen. Yet, because the script doesn’t succeed in at least being funny, not only do they flail but it makes it so this doesn’t deserve to be called “camp.” What it deserves to be called a waste of money and something which may only have worth if you want to claim you’ve seen the entire filmography of someone in this.