written by Amari Published: May 18, 2019Last Updated on May 28, 2019
0 comment
FacebookTwitterPinterestRedditEmail
Table Of Contents

Rocketman is like a stage musical turned movie, and if it wasn’t so long and arduous, it could be perfect for both die-hard and casual Elton John fans.

Rocketman begins with us seeing Elton John, fresh from abandoning a show at Madison Square Garden, checking himself into rehab during the late 1980s. And from what it appears, he goes straight from the dressing room, to the rehab facility, sits down in a chair, and as he tells his story, he strips down from his devil costume to eventually being in a bathrobe. Essentially signaling he took off his armor and was now vulnerable enough to speak on his varied issues.

Not just with bulimia, cocaine, alcohol, prescription pills, sex, and a shopping addiction, but feeling unloved for much of his life. With perhaps the only exception being his grandmother and long-time writing partner Bernie Taupin. Yet, while they provided a form of love Elton needed, it was clear it wasn’t enough. He needed not just a romantic form of love but also the ability to love Reginald Dwight as well. Someone he long left behind for he felt he had to fully assume the persona of Elton John to reach the heights he desired. 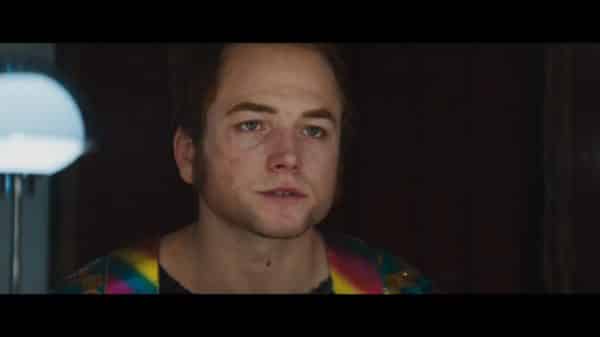 Rock bottom for Elton John will lead to moments you may find yourself teary-eyed. Be it when his mother seems like she’ll accept him, but follows that with noting he’ll always be alone. How the song “Rocketman” is handled when he decides he wants to die, and the last few scenes as he confronts his demons and insecurities. As for the rest of the film? Well, we get into that below.

How Much It Feels Like Musical Biopic vs. A Biopic With Music In It – 86

But before we do so, I must note I found this film more so being a musical biopic, rather than a biopic with music in it, like Bohemian Rhapsody refreshing. Especially early on as it led to dance numbers and a certain energy which tapers off as the film goes on. Plus, it makes it so the other actors get a moment to shine. That is, rather than be fodder for Egerton or people whose importance you have to acknowledge, but don’t leave a long lasting impression.

Due To Elton’s Songs Not Being High Energy, It Makes The Film Feel Like A Drag – 65 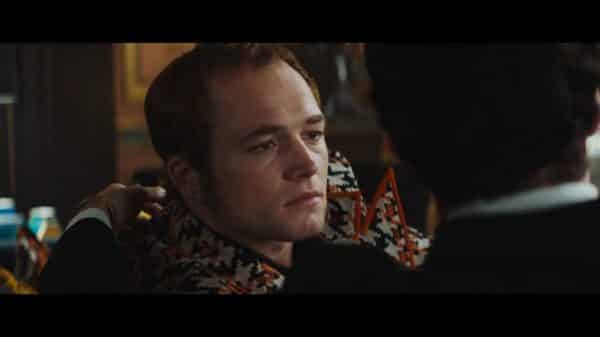 While we get “Pinball Wizard,” “Crocodile Rock” and a handful of other upbeat tunes, most of Elton’s songs aren’t like them. They are bluesy, slow, and bring the pace of the film to a crawl. Making the fact this is nearly two hours, lacks a charismatic, or comic relief character, and features a rather serious tone, a very trying experience. One which may test the attention of casual fans and those who were simply curious about Elton’s life and catalog.

Outside Of A Few Manic Episodes, Elton’s Life Doesn’t Come Off That Interesting – 70

Especially since, outside of a few manic episodes, thanks to cocaine, Rocketman is a bit of a downtrodden movie which barely touches upon Elton’s highs outside of him being high. It focuses on his relationship with his parents being sordid, John Reid taking advantage of him, and the rest of the film is just costume changes and his music. And while many may know of Elton working with Peter Townshend of The Who, amongst others, no other musicians are featured in the film. Some are name-dropped, like Mama Cass, but we don’t physically see a single one besides Kiki Dee for a hot minute.

While I can imagine Rocketman getting critical acclaim, especially for Egerton’s portrayal of Elton John, I question whether it may have the commercial success of Bohemian Rhapsody. For Rocketman seems more geared towards having an indie film vibe, but with big budget musical elements. Thus creating this mix of acknowledging Elton John’s grandiose costumes, while stripping all that away to show a man who suffered greatly to get the joys he now has.

Leading to why this is being labeled as mixed: All that joy is put into an epilogue. So all you get, over 2 hours, are a few upbeat songs, paired with music which drains the life out of you and a rather depressing tale. One which features very little in the way of comic relief or happy moments. Never mind showing some of Elton’s famous friends/acquaintances, and their work together, to maybe bring some of their energy to the film. For while the film may have big music numbers early on, in time the only energy we get is from when Egerton is supposed to be high and is having a manic episode. Ultimately leaving us with a film which should be hailed for its performances, but maybe not its pacing.