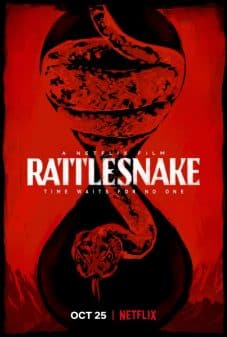 Rattlesnake helps you understand why Netflix no longer allows people to comment or see community ratings.

On their way to Oklahoma, after Katrina leaves her husband, she stops her car due to a flat tire in Texas. It is there when her 5-year-old daughter gets bit by a snake, and in a panic, she rushes into a trailer, and a mysterious woman helps her. However, what Katrina would have never guessed is the price for that woman’s help wouldn’t be monetary but a soul.

Leaving us watching her avoid doing as told and instead be repeatedly warned how she is running out of time.

There Is No Hook Here

Rattlesnake is the kind of film which relies on a cute kid to cheaply make you care about what is going on. After all, who would want someone adorable like Clara to die? However, Katrina’s conflict doesn’t inspire you to feel sympathy for her, and as adorable as Pratt is, she doesn’t evolve past that. So unless you have a young child and can fully relate to doing anything for them, things may not click for you.

But, even beyond that, the film doesn’t necessarily present a whole lot of options for Katrina that we can see her capable of murdering. Heck, considering her inability to take out a man on his death bed, it became clear we’d spend the majority of the film waiting for her to take someone out and when I tell you it is a draining experience, believe me.

There Is A Certain Creep Factor You Have To Appreciate

While wasting her time wrestling with her morals, Katrina is repeatedly warned it’ll be sunset soon, and thus Clara’s soul will be taken. This presents some creepy moments. Not enough to scare you, for the film doesn’t employ jump scares or anything too graphic, but there is just enough that it makes you wish the film took things further. Be it the supernatural forces trying to tempt Katrina to pick one person or the other, if not push her to kill herself to give them the soul they wanted.

When we did our first look, there was some apprehension about this film. Mostly due to Greenwell’s part in it, after The Rook, but it ended up she was a minor, almost insignificant, issue. For the main problem with Rattlesnake is it lacks a hook. A child, who we barely see throughout the movie, being endangered isn’t enough. Katrina avoiding the task she was told to do, and watching her get reminded how she is running out of time was creepy, but not enough to save the film.

Hence believing this is an acquired taste. Could someone find this scary, maybe even connect with the fear of your child being taken from you? Yes. However, it doesn’t drive that fear hard enough to really inspire empathy or even a connection to any character in the film. Instead, you are just left watching in hopes something, or someone, will liven things up.

With only 7 hours to repay the soul that death wasn’t given, Katrina struggles with who to kill. There is the person across the hall from her, but with their family in the building, she chickens out on suffocating them. Thus, for a good portion of the film, she is just unsure what to do, who to kill, and is wasting time. However, after meeting Abbie and Billy, she knows who to go after.

Billy, from what we see, is an abusive man, and Abbie is a woman who, by some estimates, will likely die by Billy’s hands if she doesn’t leave him. So, to kill Billy, and not get caught, she gets a gun, breaks into his home, kidnaps him, and planned to kill him in the desert, but then he fights back. This leads to her having to chase him, and nearly getting killed, until the snake which bit Clara bites Billy and he falls off a cliff.

Mind you, not a huge one, but the fall is more than enough to cripple him and make it so Katrina can easily kill him. A task which she does, and it seems to happen just before sundown. Thus she walks to where her car was, gets her daughter, hides the mark on her neck from when she nearly killed herself, and they continue on to Katrina’s mom’s home in Oklahoma.

Considering everything was based on whatever demon haunts Tulia, Texas? Technically no. At least, I can’t imagine Katrina going through that area again. Now, could her ex-husband, on the way to see his daughter? Maybe. After all, it isn’t made clear what the circumstances were of her leaving, just that she considers herself a single mother now.

There Is A Certain Creep Factor You Have To Appreciate - 70%