Thanks to some bizarre decisions, #RealityHigh loses the few things likable it had to utter and complete nonsense.

Dani’s (Nesta Cooper) story and character is something you’ll find easily comparable to a whole slew of teen romantic comedies ranging from She’s All That to Pretty in Pink. Be it the sort of “ugly duckling,” in the form of a girl dressing comfortable and without makeup, going from nobody to somebody or her guy best friend pining for her forever yet never getting his chance or the girl. All the while, she is with some wealthy cute guy who she looks quite cute with.

That is, until popularity, alongside a former friend, turned bully, and now wants to be friends again, Alexa (Alicia Sanz), changing our lead. Which, as usual, is due to a boy. In this case, the popular swim team sportsman, and childhood crush Cameron (Keith Powers). Someone who had mutual feelings for our lead but was with someone, that is Alexa, who dumps him to get someone more social media famous.

Because, OMG, sadly that is a huge thing for #RealityHigh. How social media, and using it to bully people, is and can be done. Thus turning a girl who just wanted to let loose a bit, appear completely unhinged, out of character, and put her on track to lose it all. Though, of course, Dani, with some help from her little sister Taylor (Leah Rose Randall), finds a way to come out on top and regain her senses. Making it so all ends well for her and badly for Alexa.

It’s increasingly rare for a Black character’s parents to not be interracial or for them to not pursue an interracial relationship. Which isn’t to imply I have anything against those who are in or pursue such. More so, it has usually come at the cost of getting to see Black Love and all of its delights. So with seeing Dani’s parents being Black and she attracted to the Black guy over Duckie, I mean Freddie, it warmed my heart a little bit. For despite culture not being written into either Dani and Cameron’s characters, just seeing the rare depiction of two Black “teens” together was nice. 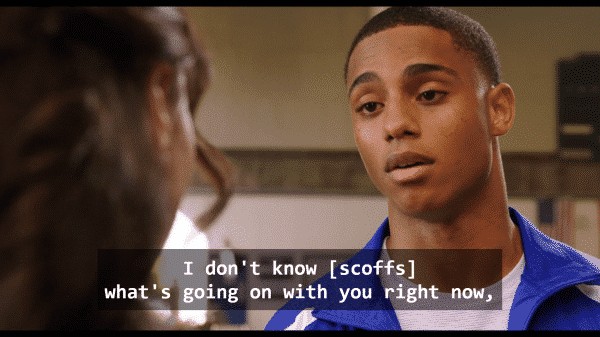 Can someone explain how Dani goes from someone who is focused and perhaps introverted to someone who would get drunk at school? I get there is supposed to be this weak reasoning about how popularity played a hand, but am I supposed to take that seriously? This does claim to be a comedy.

Yet, being that Dani just quickly becomes self-absorbed and a bit of an ass, it really makes me wonder if I missed something? Yeah, Dani notes she was jealous of Alexa’s life but how does that lead to a character who was trying to use social media to support the animal shelter she works at to being egocentric and ruining all she has ever worked for? I mean, we are led to believe Dani is a smart girl, right? Surely, someone who has tortured her consistently for years suddenly coming to her house talking about being friends has to raise a red flag right? Especially after you started dating their ex.

It could be perhaps I’ve seen too many movies similar to this, but come on!

It’s Just a Sorry Excuse For A Comedy

#RealityHigh reminds me of the sad attempt that was Death Note to represent what it is like to be a teenager. Something just feels off, condescending, and out of touch about how everyone is written. Even if you are supposed to look at it through the lens of this being a comedy. Take Broussard (Peter Gilroy) for instance. He clearly is supposed to be a comedic character but it just never clicked who is he supposed to be funny to? I don’t believe my sense of humor is mature so shouldn’t jokes about the principal’s last name be funny? Shouldn’t Broussard’s antics make me laugh vs. make me roll my eyes? Could it be I have finally become an adult?!

Nope, it is just between being cringey and so bad you can’t even call it campy, those tasked with making the film funny try too hard or not enough. Making the writing, and their performances, seem like something they should be embarrassed about. Especially John Michael Higgins as Principal Dixon. Though, similar to Eugene Levy, arguably he doesn’t seem that choosy when he picks roles. He just so happens to luck into a good one every dozen or so.

Similar to Paranorman, a character we are given the total impression that they are straight, are discovered to be gay. Which I’m only criticizing since it was done for shock value, if not a joke. Which, with it being 2017, it makes me hope that one day, we will do better.

Be it Shannon (Michael Provost) and Holly (Anne Winters), Freddie to a certain degree, among the rest of the supporting cast, there are times you really do want to invest in them. However, in the case of Freddie, you are giving a severely watered down version of Duckie from Pretty in Pink. Then, with everyone else, it really seems #RealityHigh only wants to go so far to show how complacent people get about bullies when they aren’t the one being teased or harassed. Which is a shame for, at least when it comes to Shannon and Holly, there is a cute romance and story there. However, sadly they are barely given enough screen time for it to have some oomph.

Cameron and Dani’s relationship is cute, but that’s about it. Dani’s transformation into an Alexa type does not click as something that can or should make sense what so ever. Add on a lot of moments which seem like they should have been funny fall flat, and it leaves you with the impression that Netflix might be back to focusing on quantity over quality.