Mirai is a touching story about one boy learning to appreciate his family and, essentially, learning that he needs to stop being a brat.

Kun is a little kid dealing with the arrival of a little sister who gets all of his mom and dad’s attention – in the worse way possible. He yells, screams, even sometimes wants to hit Mirai despite her just being a baby. This jealousy triggers, when he goes into the backyard, multiple odd instances. One being the dog, Yukko, becoming human and speaking to him about the jealousy he felt when Kun was brought home. There is also teenaged Mirai talking to Kun, among many other situations which lead to Kun learning empathy and love for his sister, dog, family, and ultimately, him learning to stop being such a cry baby.

One of the things which may surprise you about Mirai is that it is the kind of film which may lead you to cry. Why? Well, because it hits you from multiple sides. If you are someone with younger siblings, it may remind you of a time when your parents, everyone, seemed consumed by the new kid and thus you felt isolated. Then, when they weren’t paying attention to the newborn they were exhausted and didn’t have time for you. Though this film also hits you with the sadness the dog, Yukko, feels because he was separated from his mom, gained this new family, and then Kun took all the attention away from him.

Which is all to say, this film deals with loneliness and feeling abandoned a lot – from a child’s perspective. Something that may seem simple, not a big deal, to you as an adult, but the longer you spend with Kun, the more you understand why he would raise a toy train to his sister. Why is it he throws tantrums over a pair of pants and so much more. Life has changed without his input and it all happened at that age just as he begun to get some sense of autonomy.

The Fantasy Sequences, Going To The Past, and The Train Station

To be honest, there are times when Kun will seem outright insufferable. Especially as he yells and screams to the point “Brat” and “Cry Baby” are the main adjectives you’ll associate him with. Yet, then comes him walking into the yard and being transported. If not the older Mirai showing up, or him traveling somewhere far away. When that happens, the movie does more than help you relate to Kun but gives you a slightly perplexing experience.

What I mean by that is, the way this film is cut is almost like a mini-series made into one whole story. After nearly every time Kun ventures out somewhere, the screen goes Black and he finds himself home. Yet, despite feeling like this could have worked as a mini-series, you have to experience it in a theater. The main reason being the train station scene which makes things a bit trippy and weird. Maybe even “dark” for a lack of a better term. 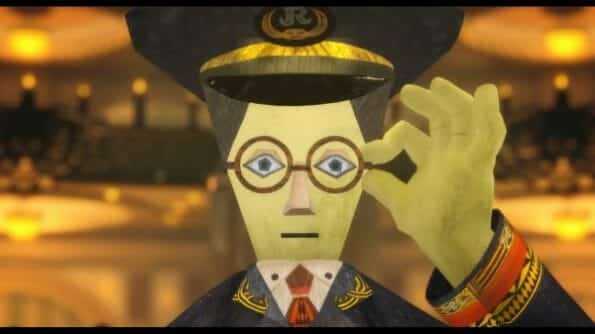 The reason I say that is, as we swoop down an escalator, we get this Princess Tutu

vibe. That is, something which can kind of be appropriate for kids, but holds a twisted quality to it. One that may not include blood or anything truly scary, but it is perhaps the final push needed for you to understand Kun’s frustration. Also, it acts as the trigger for a series of scenes which could make you cry.

Mirai may not necessarily be about the named character, but her affect on a young boy’s life, but with it being one of the sweetest movies around, that is why it is being labeled worth seeing. It’s the kind of movie which knows how to develop a character, one you may not often like, but help you understand them. Heck, understand their parents, and family as well, so you know why they say and do certain things which upset him.

For, in the long run, we’re all a product of our family’s past and to ensure a better future, we have to learn from it. Just as Kun was forced to do so that his relationship with Mirai could be good, he could get along with his parents, and he wouldn’t do something as foolish as run away. Especially when he can barely read.