Kind of sappy, with a little bit of humor, Like Father presents just enough to get in your feelings and be worth your time.

At 31 years old, Rachel has done quite well for herself. At an advertising firm, that she has been at for 9 years, she has reached the point where she may be promoted to being second in command. Then, to top it all off, the guy she fell in love with in college, Owen, she was supposed to get married to. That didn’t happen. However, she did get to reconnect with her 55-year-old father she hasn’t seen in 26 years, Harry.

Leading us to what you expect to happen. A lot of drinking, Harry trying to explain why he left, why he came back into his daughter’s life, and of course there is some drama thrown in to complicate the reconciliation holding. Yet, with them both being in the same boat, literally and figuratively, there comes a realization that they can either repeat the mistakes of the past or forge a new future.

It’ll Grow On You 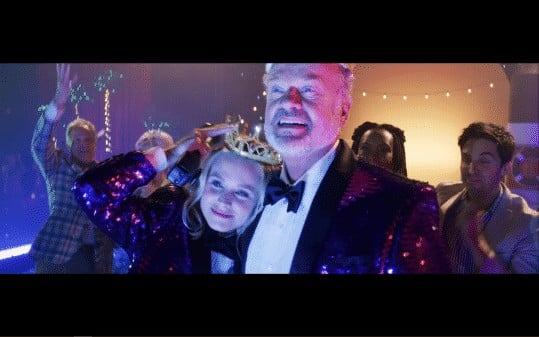 This is not a film which sells you from the start. While Bell and Grammer have enough chemistry to keep you interested, with it trying to be a dramedy, it starts a bit rough. Mostly because the writing, which could just not appeal to me, doesn’t really find the humor in the situation at all. Luckily though, after you become adjusted, it starts to explore the heart of the film.

Something which is split into two. The most prominent being this estranged father/daughter relationship. Now, let me begin by saying Harry’s reason for feeling he wasn’t needed and all that, it didn’t do a damn thing for me. Especially since he doesn’t really present the idea Rachel was a difficult child to help raise or that him and Rachel’s mom had a terrible relationship. It just seemed work was something he was more committed to and which demanded more of his time. So, eventually, he stopped splitting his focus and went all in with work.

However, with it coming to the point all he had was work and his partner Gabe, partner in a work sense, not homosexual, some realizations hit. Especially since Gabe and him didn’t have any real family besides each other. That is, until Harry, who did Google his kid from time to time, realized he had this daughter and decided to show up. Leading to what really gets to the heart of the movie – loneliness and trying to compensate lack of meaningful interactions with work.

In that, we truly get the heart of the film for Rachel is seemingly doing something along the lines of what her father did. When it came to Owen, it wasn’t love as much as convenience. Three months after her mom died this man proposed and she didn’t want to be alone. But, like her dad, she put work before the most important relationship she had at the time. So you can see patterns with this family. The main one being, the wake-up call only comes when you lose the one person who gave you a life outside of work. For Harry, that was Gabe and for Rachel, it was her mom.

Leaving us with two lonely people who aren’t desperate for a connection but realize how badly it is needed for, otherwise, they’ll just be on autopilot.

To be honest, if this wasn’t a film on Netflix I wouldn’t watch it or probably recommend it. This is not something I’d pay $10+ to see. However, with this being a Netflix Production, something you can watch at leisure, it gives you the ability to pause and process. For watching this straight through, it would be straight up trash. Harry’s reasons for leaving and coming back are purely selfish. He left because he could and returned because he had no one. Add in he spoke of Googling his kid, and likely could have popped in at any time over 20 some odd years and it ruins the reconciliation a bit.

Yet, if you are sappy like me, eventually it will get you in your feelings. Mostly because you can see Rachel needs someone, outside of work, and Harry coming around is just good timing. Especially since, in movie world, you can imagine her just foregoing love and relationships for 10 or more years if he didn’t pop in. Thus the mixed label. This film definitely won’t appeal to everyone, but if you dig films of this ilk, in time you may shed a tear and be in your emotions a little bit.