The One and Only Dick Gregory (2021) – Review/Summary (with Spoilers)

The One and Only Dick Gregory feels very much like a highlight reel that pushes the idea it wanted to either minimalize faults or that there weren’t any.

From a poor upbringing to his start in the South Side of Chicago, to the Playboy Club, Jack Parr show, then committing himself to the civil rights movement, Dick Gregory did not have a simple life. Add in having 11(!) kids, getting into the health food industry, working with Martin Luther King Jr., Michael Jackson, and mentoring so many modern-day comics? The man is a legend, which is the documentary’s primary focus – the myth and the legend.

You can’t truly appreciate any spectrum of life unless you spent time on both sides.
— Christian Gregory

Once you get a man laughing with you, it’s hard for him to laugh at you.
— Dick Gregory

It Covered Its Bases

You get what is to be expected from The One and Only Dick Gregory. As noted in the summary, it covers his youth, his rise in the Chicago comedy scene, how he compared and differed from his contemporaries, like Bill Cosby and Richard Pryor, and his involvement in civil rights for a notable portion of his life. With, of course, friends, family, business partners, and historians littered throughout giving commentary, alongside archival footage to create a narrative.

Being that Dick Gregory semi-retired from comedy seemingly in the 1970s and didn’t really get back into the full swing of things until Rob Schneider got him a role in “The Hot Chick,” not necessarily knowing Dick Gregory’s legend is understandable. Luckily, the stories about him Medgar Evers, alongside him making MLK life, conversations he had with Hugh Hefner, and how he would talk to comedians you surely know? Oh, they paint a picture. It’ll make you feel remiss for not knowing Dick Gregory just as much as you know Richard Pryor or Bill Cosby before he became infamous.

Heck, even hearing about his hunger strikes and that he was a feminist, anti-war, and much more, helps you understand Gregory crafted his own lane. For while he reportedly cursed you out like it was a love language, that wasn’t because he lacked intellect, but that was how he expressed his passion. I mean, taking note that he was in the heat of the civil rights movement, damn near got killed when Medgar Evers was assassinated, and would always be the warm-up before Dr. King came to town? It creates a sense of urgency. The kind of urgency where niceties quickly become unnecessary fluff that dilutes the point that a person is trying to get to.

Let me just begin by saying, I was by no means looking for a hit piece. However, something about this documentary push the idea it didn’t desire to get into the less than ideal topics. Be it going too much into him being an absent father, not the best businessman, or other setbacks – like the issues which came from his Bahamian Diet company.

To us, The One and Only Dick Gregory wants to protect the man and push you to focus mainly on the myth and the legend. Which I get, yet I also feel that by rushing through his flaws or by minimizing them, it does a disservice to what is Gregory’s whole story, rather than what his family wants him remembered for.

To be honest, I think my disappointment stems from seeing Joe Morton play Dick Gregory in the play “Turn Me Loose,” and with that, I expected just an equal amount of this being informative as well as comedic. However, while we get a few highlights of his standup career early on, from that point, it’s less about the jokes and more about how serious his role in various rights movements were. Which I get was very important to him, especially considering the sacrifices he made to use his celebrity until his popularity waned down.

However, what drives the mixed label is that the documentary didn’t want to highlight the man who was Richard Claxton Gregory. Rather, it gives us the highlight reel, the sales pitch, the type of information which pushes someone to be larger than life in a way that puts them on a pedestal. Hence the mixed label but, generally, positive feelings about the film. 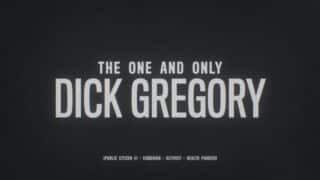 The One and Only Dick Gregory (2021) – Review/Summary (with Spoilers)
Who Is This For?
Those interested in the story of Dick Gregory's life, especially the points that more so build up the legend than give you a full picture of the flawed man.
Highlights
It Covered Its Bases
The Stories Told
Disputable
Limited Criticism
79
Mixed (Divisive)
You Might Be Interested In