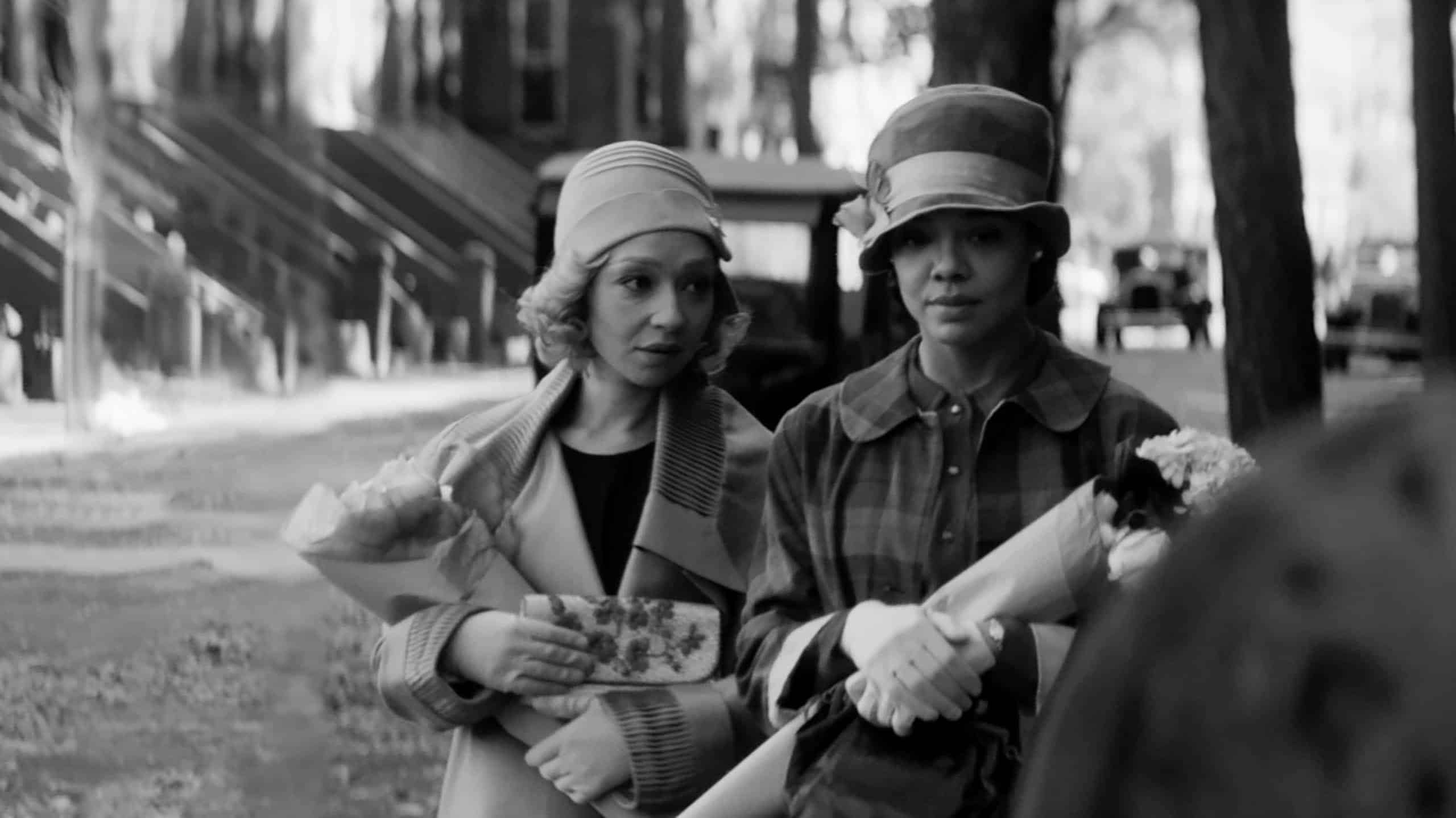 Ruth Negga and Tessa Thompson appear in Passing by Rebecca Hall, an official selection of the U.S. Dramatic Competition at the 2021 Sundance Film Festival. Courtesy of Sundance Institute | photo by Edu Grau.

While the sometimes volatile intimacy between Ruth Negga and Tessa Thompson makes Passing interesting, you may not feel it confronts the subject matter as you want.

When they were younger, Clare and Irene were friends. However, with both being fair-skinned women, they decided to take different paths. Clare decided to pass for white, marry a wealthy white man, and live a life of luxury and privilege. As for Irene? Well, she chose to live her life as a Black woman, marry a wealthy Black man, a doctor, and live her truth.

However, despite both of their decisions made, you can see an almost longing for each other’s life. Irene, being surrounded by Black people, getting to live out loud, Clare sees a certain freedom in that. Especially due to her husband being racist. As for Irene? Well, Clare’s recklessness, the ability to be messy and free, in her own way, is frustrating to watch, specifically the way Clare exhibits it. For in Irene’s life, be it her role as a wife or mother, too much relies on her being put together to have any sense of freedom.

Leaving you to wonder, as Clare tries to integrate more and more into Irene’s world, at what point will either reveal their truth or find it possibly snatching all they take advantage of?

I’m beginning to believe that no one is ever completely happy, free, or safe.
— Irene

[…] all of us are passing for something or another.
— Irene

At 18, Clare married her husband, later had a child, and acts as she thoroughly enjoys passing for a white woman. Especially since her husband’s jobs allows her to often travel, hence her return to New York City. But, while being passing has its privileges, it has meant mostly cutting herself off from the Black community due to her husband being racist. This makes her seeing Irene a blessing, since she knows her truth and knows it is safe with her.

Irene is a Black woman with a Black husband, two Black sons, and with living her truth, she is satisfied, but not necessarily happy. If anything, she has a life filled with distractions. However, Clare’s coming into her life makes working with the negro league, Clare’s two boys, and even having the full right to claim her Blackness not enough. In fact, it pushes her to seemingly feel limited due to the effects of racism and always trying to be distracted or escape something.

The Intimacy Of Knowing Someone’s Truth

The relationship between Claire and Irene is complicated due to Irene being in on Clare’s secret. With that, you can see Clare desperate for Irene to be that person who lets her be one once more with the Black community. To allow her, despite disowning her Blackness, even taking on the words and attitude of her racist husband, to be allowed once more the sense of sisterhood, and be one with the culture and not be a foreigner visiting.

That need you can see creates an almost uncomfortable intimacy for while Clare loves being seen and feeling she can live vicariously through Irene, the feeling isn’t always mutual. In fact, at times, it seems Irene is somewhere between envy and outright hatred that Clare is willing to throw away everything she worked for. Especially since she is throwing it away for something which was her birthright, the Black experience.

And you can see, as Clare gets to benefit from having access to Irene’s life, there isn’t reciprocity. So Irene tries to find it by crafting some sort of intimacy between her and Clare. However, it seems what Clare wants is access to Irene’s life more so than Irene. She wants the ability to dance with a Black man openly, play with two Black boys who love and adore her, and joke around with her cook, who makes food the way she knows is best.

As for Irene? What is she beyond the middle person? The one who knows Clare’s secret, and thus Clare almost acts like Irene owes her something despite Clare being the one made vulnerable by someone knowing her truth. And after a while, you can see with Irene not benefiting from the relationship and feeling Clare isn’t just a guest in her world, but trying to integrate, there is this anger.

After all, Irene had to work and sacrifice for all she has, and as a woman in the 1920s, she is still making sacrifices. So for this woman to pressure Irene into a friendship and then breeze in and breeze out when convenient? Get all the benefits of being both a Black woman and passing as a white one? Oh, it is infuriating, but who can Irene speak to about this without exposing Clare in the process?

Leaving it so, while there is this intimacy between Irene and Clare, it is somewhere between sisters and lovers in terms of their shared history, as friends, but also as light-skinned Black women. But, due to it wavering between something platonic and potentially romantic, it means a constant shift in power dynamics until a realization comes about that what is happening is no longer sustainable. Thus, by one means or the other, the relationship has to end.

Expecting and Wanting Something Else

If you, like me, were not familiar with Nella Larsen’s book, only saw the sole image used and the brief description, you’d think Passing would deliver something else. Be it more of Clare’s life, as a woman passing for white, and you seeing the blessing and curse of it, beyond lack of access to her community. Perhaps acknowledging the privilege they both have and how lighter-skinned women were pushed to be seen as more desirable and getting a real conversation about colorism. Yet, while the film does go into certain topics with depth, you may sometimes feel it often missed certain opportunities.

Heck, taking note Clare has a daughter, someone who is bi-racial, it would have been interesting to see Clare, with her longing to be accepted once more as a Black woman, having a daughter who, for her own safety, would never know who she is. At least while Clare was financially dependent on her father.

While you have to appreciate Thompson and Negga’s performances, there just seems to be so much missing due to us not getting to peer into Clare’s life. Which, with her being the one making Irene’s seem so grand and enviable that Clare would be willing to blow up her own life and her daughter’s, it makes the reminder that Clare rarely, if ever, lets you behind the curtain increasingly frustrating.

Yet, there is no denying the tension and chemistry between Thompson and Negga compensates for what you may dearly desire was included in Passing. Hence the positive label.

Affiliate Link(s) Links contain affiliate links which, If you make a purchase, we’ll earn a commission from the company. New Movie Releases - Amazon
Click on the image to check out the latest movies available on Prime Video

The Intimacy Of Knowing Someone's Truth - 89%

Expecting and Wanting Something Else - 77%

there is no denying the tension and chemistry between Thompson and Negga compensates for what you may dearly desire was included in Passing. Hence the positive label.