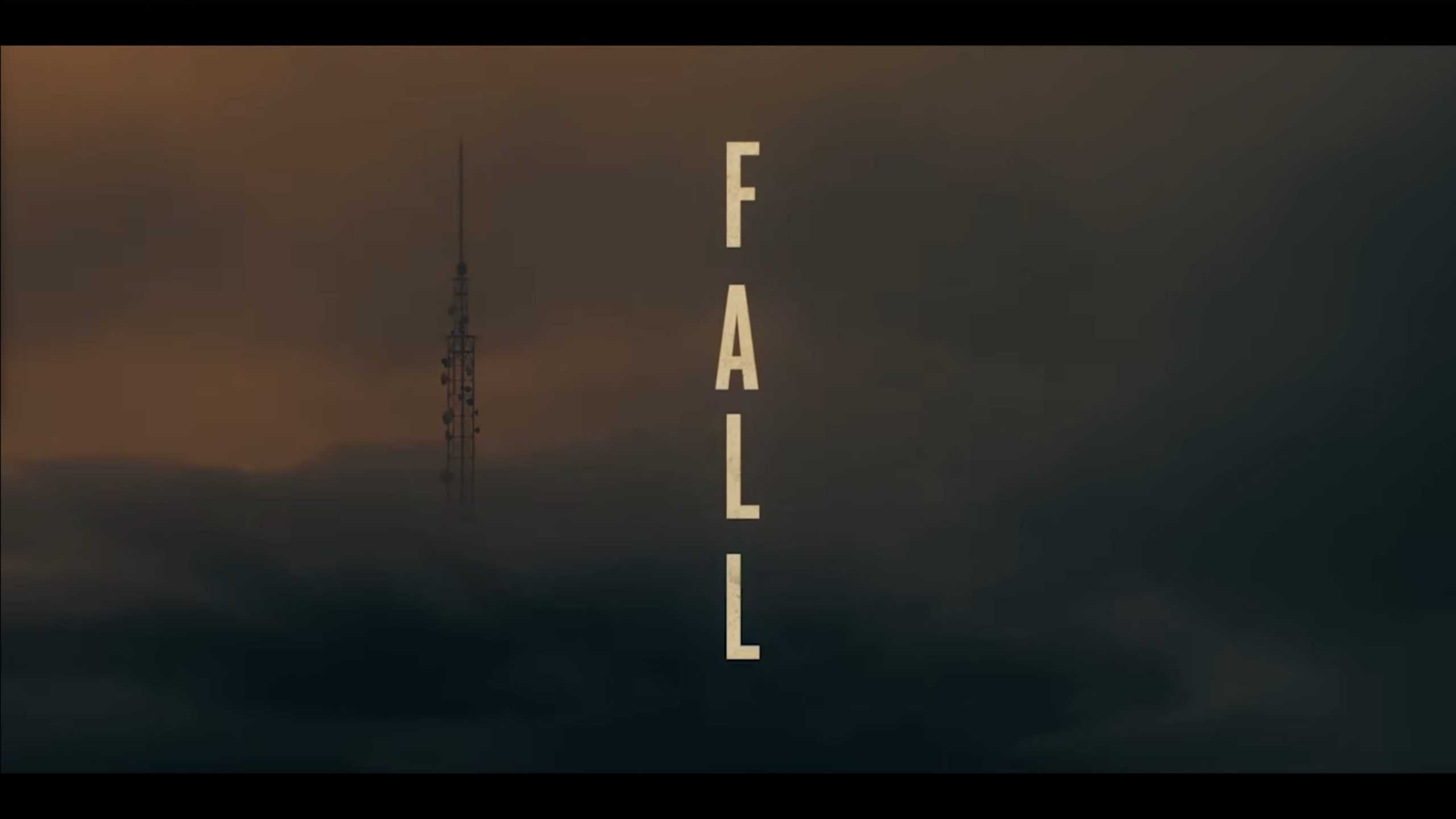 “Fall” will make your anxiety skyrocket and create moments when you will suspend disbelief and hold your breath as you question whether the leads will live or die.

A year ago, Dan, Becky, and Shiloh were avid rock climbers. Not in some gym, in a secured environment, but out in the wilderness, climbing up cliffs. This was their thing as friends and as a couple when it comes to Becky and Dan.

However, an accident leads to Dan dying and sends Becky into a year-long depression no one, especially her father James, can get her out of. So, at the bequest of James, Shiloh returns to Becky’s life, and despite the trauma that triggered Becky’s depression, she asks her to climb a 2,000-foot structure with her.

This challenge, at first, is one of the hardest things Becky has done since her nerves, anxiety, and so much more are triggered every time she looks down. But, once at the top, she feels alive, thrilled, and like she accomplished something great. Maybe even has a taste of her old self.

But then comes the issue of getting down. Due to bolts loosening, flying off even, and the ladder to get down tumbling to the ground, Becky and Shiloh are stuck, and viewers are left unsure whether these two may make it down alive or picked apart by vultures.

Becky was very much in love with her husband, Dan. He was a shoulder to cry on, handsome, as adventurous as her, and everything she could want. This is why, for 51 weeks, she cried into a bottle and mixed her tears with vodka, whiskey, or whatever kind of liquor was available. It even came to the point of her contemplating ending it all, for her misery was not getting better, and there wasn’t a soul to ease the pain.

Charming but never liked by Becky’s father, James, Dan seemed almost perfect. Becky knew it, Shiloh knew it, and because of this, his death was devastating.

Shiloh is Becky’s best friend and for a good portion of her life, was envious of what Becky and Dan had. So, when he died, she decided to go full on into becoming a YouTube star risking her life to climb notable feats by herself. The escapism allowed her to take her mind off everything.

At one time, Becky and James were really close. They’d watch WWE together and seemingly talk about anything. But once James decided he was against Dan, that ruined their relationship and it hasn’t recovered since.

You know how some critics or cultural writers speak about how the city is a character within itself and essential to telling the story? I’d say that about the score. Which, when paired with how “Fall” is shot, gives a constant reminder of how high up the ladies are, beyond Shiloh reminding us, forces you to take deep breaths. Then, when you add in the music, that triggers anxiety for with each slip, swing, or Shiloh and Becky pushing themselves to points most are only capable of when in life or death situations? Your heart races, and you find yourself forgetting you have been holding your breath for a while when you exhale.

Time Flies Right On By

“Fall” is a movie in which maybe 15 or 20 minutes are focused on Dan’s death, Becky mourning, and establishing who James is. After that, “Fall” focuses on Becky and Shiloh climbing 2000 feet and you questioning how they will get down. While up there, we don’t get flashbacks, beyond videos on Becky’s phone, of when Dan was alive. It is just Becky and Shiloh up there, trying to figure out how to get down without becoming a blood-splattered mess for vultures to pick over.

Strangely, even within an arm’s length of two hours, this film doesn’t get boring and push you to check your phone. It places scares throughout the film, makes you question whether each risk is worth it, and even implements weak and strong twists to keep things going. Which ultimately leaves you more focused on what’s going on than how much longer you’ll have to wait for the resolution.

You Get Emotionally Invested, Despite Minimal Character Development

Here is the weird thing about “Fall,” it doesn’t really tell much about the characters we meet. What does Becky do for a living? What did Dan? Where and how did they meet? A lot of these questions go unanswered. You don’t even learn how Becky and Shiloh met. All you know is Dan connected the two, and Shiloh disappeared after Dan died.

Yet, despite learning so little about these two women and their actors not being the likes of Emma Stone, Zendaya, or others who, by name, instantly get you hooked, you get emotionally invested. You don’t know much about them, but a part of you wants them to survive so that you can. Which for us is weird since we generally want all the details on the front end, or else we can’t get into the movie. However, with “Fall,” it strangely wasn’t necessary, and all you cared about was these two girls surviving.

To begin, we learn James was right to question if Dan was a good guy because Dan and Shiloh had an affair. It was before Becky and Dan got married, but it did last for months, and Shiloh fell in love with Dan. This is part of why she disappeared after Dan died since, while she was friends with Becky before Dan’s death, it seems living vicariously through Becky, and getting to hang out with Dan, was her means of getting some form of love’s methadone.

Now, let it be known that Becky only discovers this affair since Shiloh was dumb enough to tattoo 143, “I love you,” on her foot, and since Dan refused to say the words but would say the numbers, it all connected in Becky’s head. But, with being trapped in a life or death situation with Shiloh, there was no time to get angry, lash out, and isolate. Shiloh was a necessary evil to get down alive.

However, in the end, Shiloh doesn’t get down alive. She ends up sacrificing herself at least twice for Becky’s survival. The first time is to get their bag which has water and the drone in it. Shiloh makes it to the dish on the B67 TV Tower, gets the bag, latches it onto the rope, and when she tries to pull herself back up, she slips, hits the dish, and dies. Becky initially blocks this out, but after charging Shiloh’s drone and it getting hit by a truck right before someone can see it, she forces herself to remember Shiloh is dead.

Thus leading to the second sacrifice. Using Shiloh’s shoe, Becky shields her phone after texting her dad where she is and to get help. For with there not being a signal 2,000 feet up, it is hoped that, by the time the shoe hits the ground, the message will send. But, it isn’t just Shiloh’s shoe that gets sacrificed, but her body. You see, this is the second time this method is being attempted, and only a shoe and padded bra were used the first time. This time, Becky stuffs the shoe with the phone in it, and then puts the shoe in Becky’s guts that were being picked at by a vulture. She then sends Shiloh’s body flying down 2000 feet.

Luckily, it is not in vain as James gets the text, and Becky gets rescued with us not learning if she ever climbed another thing besides stairs in her lifetime.

Fall (2022) – Review/ Summary (with Spoilers)
Overall
“Fall” is a welcomed surprise with everything imaginable working against it, from fairly unknown actors to minimal character development. Yet, thanks to the dangers Becky and Shiloh are in and how the film leans heavily on that, you get invested beyond initial expectations. Even to the point of “Fall” having a bodily effect on you.
Highlights
The Cinematography & Score
Time Flies Right On By
Disputable
You Get Emotionally Invested, Despite Minimal Character Development
79
Follow Wherever I Look on Twitter and Instagram, Like us on Facebook, and Subscribe to the YouTube Channel.