Wherever I Look
Recaps, Reviews, and So Much More
Home Movies Extremely Wicked, Shockingly Evil, and Vile (2019) – Summary, Review (with Spoilers)
Movies

Extremely Wicked, Shockingly Evil, and Vile maybe words to describe Ted Bundy, but what you mostly get is his charming side – until the end.

From 1969 in Seattle, when Liz and Ted met to one of their final meetings, as presented in the film, when she pushed for a confession, this film is less about showing how Ted fits the title’s depiction and more how charming he was. Whether it is being a surrogate father to Liz’s child, or just making it seem he was more than capable of having a normal family life. For those expecting to see the monster, look away since all we get is Ted’s charm and antics on the way to the electric chair.

Understanding The Charm of Ted Bundy People who have the ability to kill, or simply hurt, others are a fascination. What were their childhoods like? Were their parents twisted? Could anything have been done to circumvent them gaining the mindset necessary? That isn’t gone into with this film, but we do see Ted’s charm through Efron more so using his own than necessarily tapping into Ted. Yet, arguably, it still works to push the point that Ted’s charisma created a necessary change in the criminal justice system as he proved it isn’t just the weirdos and outcasts you have to look out for. It’s also the ones who look safe, the kind your daughter might marry, and who you might wanna share a beer with.

I mean no disrespect, but there was way too much of Liz in this film. Which isn’t to say Collins’ performance was bad but more so felt like it wasn’t used to push a sense of normalcy. If anything, she seems in a fantasy you can’t tap into. And as the allegations pop up, and you see her reactions, you are left indifferent. You don’t see her as a fool, or someone who could have done more. Heck, even with revealing she called the cops, it doesn’t lead you to applaud her trying. Like Carole, her name might be said repeatedly, but it doesn’t elicit any excitement, a wonder of how they felt, or anything.

It Holds Off How He Was Extremely Wicked, Shockingly Evil, and Vile To The End 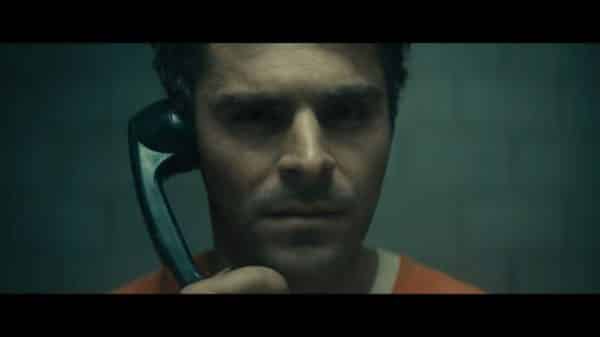 Let me tread carefully when I say this: Perhaps the best and worst thing about this film is it doesn’t show Ted Bundy murder anyone. It’s a good thing since it could inspire copycats and further the idea of the charming killer. Perhaps take advantage of real victims and disrespect what happened to them. Yet, on the flip side, while Efron was charming, he is also boring as hell to watch for two hours – Bundy’s antics and all.

Making it where, from seeing his childhood, the murders, something, it makes you wish this film provided some oomph. That is, rather than present what feels like Liz slowly coming to terms the man she once loved, let around her daughter, was a serial killer. For after a certain point, it really does feel you are supposed to develop the realization of who Ted is from her point of view, and it doesn’t work for the film.

In the long run, the problem with Extremely Wicked, Shockingly Evil, and Vile is that it only shows that side of Ted for maybe one or two scenes. The rest is about portraying how normal he seemed, and thus it created not just a boring depiction of Bundy, with some light flair moments, but a movie which seems unnecessary in a way. Especially since there are tons of Bundy interviews, including a documentary released months ago by Netflix.

Leading to why the Mixed label: Maybe if you know nothing of Bundy, this could be good. Also, I’m sure Efron’s fans will enjoy seeing him take on a villainous role. However, even with the film trying to play on Efron’s charms, try to show why Bundy is a notable serial killer, without the kills, it just falls a bit flat. Perhaps to show, like Bundy, it’s more about the shock than a sense of depth or substance.