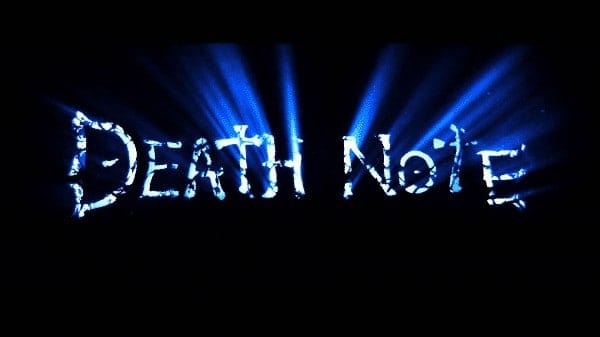 Let me preface this with noting the white washing of Netflix’s Death Note won’t be a pressing point. What will be is that it turned a cool, made for adults, anime into something that seems like a young adult novel adaptation.

Trigger Warning(s): Use of gorey picture

Light (Nat Wolff) is this weird loner type. The kind who seems like a douchebag, has no friends, and you can very well imagine is condescending as hell in conversation. Especially since it seems like he enjoys looking like he grew up in the 90s, but was born in 98.

However, things change for him when Ryuk (Willem Dafoe) drops the Death Note to this moody teen. Thus giving him the power to make a difference by killing whoever he chooses. He begins with this bully who knocked him out the day before and then this mob guy who killed his mom.

But with great power comes great responsibility, and leaving such a power to a teenager is just Ryuk’s way of making sure he can stay entertained. Which Light does by bringing Mia (Margaret Qualley) into the mix. She, a cheerleader who knew of Light, but likely barely talked to him, is told how the Death Note works and she falls in love with this power – to the point she wants it.

Unfortunately for both, due to their need to put a name to the killings, it is the first clue L (Lakeith Stanfield) uses to begin his hunt for them. One which eventually leads L to James Turner’s (Shea Whigham), Light’s dad, precinct and eventually his door step. Thus forcing Light to really push learning the true identity of L to stop him in his tracks. However, will he be able to do so before Mia gets paranoid enough to kill anyone who would threaten her taste of power? You gotta watch to see.

Perhaps the sole thing that is indisputably good about this movie, especially if you are familiar (but not a huge fan) of the anime, is Willem Dafoe as his voice actor. It just fits perfectly. Now, as for the visuals, I will admit I get a sort of IT (2017) vibe. As in, there is this unfortunate thought that for something to be scary, it has to look scary. However, I was fine with the extra details involved. What can I say? I’m someone who likes a little gore every now and again.

It’s Strickly “Based On” Death Note

Anything that could be considered depth has been removed. There is no reading of the rules, no real learning about Shinigami like Ryuk, and the movie sticks to the basic storyline of the Death Note franchise. Well, at least until it takes creative license/liberties.

Of which maybe only one pays off. For while you can forgive minor things like changing the names of characters, like Misa is now Mia, then there comes the Light vs. L saga. Of which, in the anime, was compelling. It was a sort of cat and mouse game. However, in this movie, any genius that is talked about when it comes to Light seems hard to believe. Is he perhaps smarter than most, like in subjects such as math? Yeah. But he isn’t shown to have a mind like L who apparently was trained, in some now shut down facility, to be one of the best detectives in the world. A plot I don’t remember in the anime, but might have been in the manga.

All I know is, that might the sole creative license used that I could accept [note]The “Wammy” house is a story in the manga explaining L’s origins. So the movie took from that to explain L’s intelligence[/note]. The rest? It was just frustrating. For while I wasn’t a huge fan of the anime, to the point I could recite lines or remember every last twist, turn, character, and arc, I still have fond memories of it. So for it to become an angsty young adult novel adaptation type of movie makes me want to pull the hair I have left out.

Not Another Teen Movie

Piggybacking off that, I hate how Light went from this cool and complicated teenager to… Nat Wolff. Not to imply I have anything against Wolff but to go from Light seeming like a college student to Wolff’s version, which makes him seem like a 9th grader, ruins things within the first 10 minutes. Add on Mia is damn near like any female lead you’d find in a YA novel adaptation, in which her life was meaningless before meeting this one boy, and it leads you to become more infuriated if you are even the slightest bit familiar with the source material. For while Misa, the original name for Mia, was in love with Light similar to how Mia is, there just seemed to be so much more going on between them.

With that said, as for the actual portrayal of Mia, I have mixed feelings. On one hand, I kind of like how it seemed like she was just using Light to have access to the Death Note. On the other, you have the criticism above which makes her seem like another pretty girl who falls for a guy you can’t imagine, in real life, her approaching and really taking an interest in – minus the extenuating circumstance. Plus, with how things end for her, it makes the idea of a sequel make little to no sense. My issue with Stanfield’s version of L mostly stems from him playing up L’s weirdness, making him an emotional character, and the writing. For, like with Light, the intelligence we are told he has is more said than shown. Though one can also contribute that to the fact this is an hour and 40-minute movie vs. an entire season. However, once again, the lack of a cat and mouse game, and it not being clear who is ahead, also makes a very interesting character seemingly Americanized.

Though, to make things worse, they don’t even make L into what one would consider the Black version of L. After all, L is noted for being rather unkempt and more about comfort than fashion. Meanwhile, they got Stanfield walking around with stuff that looks fresh off a runway. It’s a frustrating movie to watch if you know the anime and I can imagine manga readers being infuriated with all the changes. However, in comparison to other Americanized versions of popular Japanese anime, like Ghost in the Shell or Dragon Ball Z, at least this one is decent enough that you can sit through it and complain later. That is, rather than wanting to walk out or stop the video half way through since that “Based On” label is used far too loosely.

Hence the mixed label. For, honestly, mostly thanks to Ryuk, and occasionally L, I enjoyed the movie. Was there a lot that could have been done better? Yes. Did it seem like Netflix just bought the rights to the characters and story but didn’t seem to want their designated writers/ director to get that deep? Also yes. Yet, I didn’t find myself walking away from this movie, doing something else, and returning. I actually say through this without much need for interruption. Which, considering this is a Netflix movie, surprised me. If only because most of their movies don’t seem made to just sit and watch. That is the main factor which really pushes me from marking this as negative.